Although Israel is keeping its military option on the table, Israeli defense officials privately acknowledge that Iran is undergoing a "historic" change. 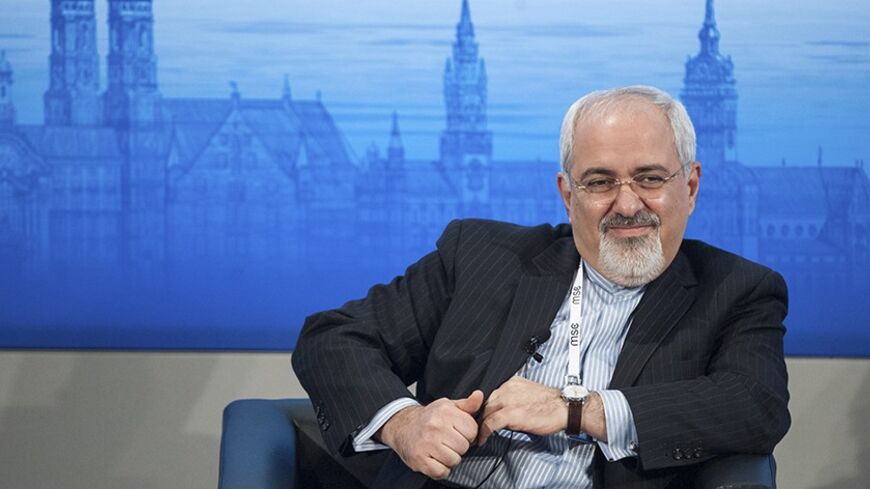 On Feb. 3, Iranian Foreign Minister Mohammad Javad Zarif astounded Israel when he said in an interview on a German TV network: “If the Palestinians are happy with the solution [an Israel-Palestinian peace deal] then nobody outside Palestine could prevent that from taking place.” Though his statement was initially mistranslated as allowing for Iranian recognition of Israel, the corrected translation is still one of the mildest statements by any Iranian official since the start of the Iranian revolution. Dubbed by Tehran the “Little Satan,” second only to the “Great Satan” — the United States — Israel is an enemy whose name has been unmentionable and whose obliteration had to be declared necessary at least once every couple of weeks.

Zarif’s statement took the Israeli media and public by surprise, but not the country’s decision-makers. In a recent closed meeting, a senior Israeli military official told Al-Monitor that a “dramatic development is taking place in Iran.” A seasoned Israeli defense official took it a step further, calling the developments in Iran “historic.”

Using high-quality intelligence, Israel’s defense establishment has been monitoring Iran closely, analyzing it in the context of an intimate acquaintance with its background, circumstances and history. No one in the Israel Defense Forces, the military’s Intelligence Directorate, the Mossad or the Ministry of Defense plans to go dancing in the streets just yet. However, the sounds and images coming out of Tehran are inspiring great hope among defense officials. Something real is going on there, they say, adding that this is no act. Searching for a path, Iran is deliberating and struggling in a way we have not been accustomed to seeing.

This article does not deal with Israel’s official political and diplomatic stances. Prime Minister Benjamin Netanyahu continues to issue warnings and sound alarms, and he will not cease to do so until Iran and the world powers reach a final agreement on the Iranian nuclear program. This is his historic calling. When all is said and done, only the quality and meticulousness of the agreement will determine whether Iran will cement its position as a nuclear-threshold state or forgo this dream. Up until now, what Israeli defense officials expected had remained an open question. Based on many talks in recent weeks with the highest-ranking officials in Israel’s defense establishment, the following is a glimpse into what they think.

Iran, they note, is not conceding its nuclear vision — absolutely not. In the eyes of the Iranian regime, acquiring nuclear capability is crucial to keeping the regime in place and warding off external intervention that could bring it down. The bomb serves as the ayatollahs’ insurance policy. What has changed is the pace and strategy of its development. The Iranians are pausing to explore other alternatives and options and recalculate their trajectory. All this is happening in the wake of a very effective international campaign that explained to Iran what the price would be if it continued to pursue its nuclear program.

Although Israel had little faith in the effectiveness of the sanctions, it turns out, according to one defense source, that "When the international community, under the baton of the United States, demonstrates resolve and perseverance and cranks up pressure on Iran, the message comes across. Iran is not immune."

Some of Israel’s defense officials believe that Iran has come to the understanding that it could not continue pursue its nuclear program at the same pace, and maintain its in-your-face approach. At some point, it dawned on Tehran that not only would the nuclear bomb not be a good insurance policy, it could very well prove to be its downfall. This insight, according to assessments in Israel, started registering during the 2009 Green Movement. From then on, it continued to permeate the authorities in Iran during the Arab Spring, which, in a domino effect, brought down regimes and tyrants across the Middle East at breakneck speed. All of a sudden, one high-ranking Israeli military official maintains, the Iranians discovered a phenomenon known as "the street," and that they, too, have one. Truth be told, in 2009 the Basij militia was scrambled to suppress the riots with a murderous iron fist, but the doleful thought began spreading in Iran that nothing lasts forever.

As soon as Supreme Leader Ayatollah Ali Khamenei realized that he had to take the masses into account, things started changing, say Israeli officials. That Hassan Rouhani was allowed to run in the presidential elections, that nobody stood in his way to being elected and that he was perhaps even encouraged in his bid for the presidency are ascribed to that insight. In the previous elections, the regime actively intervened in the process, forging the results and forcing on the people — despite their and the West's wishes — another term for Mahmoud Ahmadinejad. No more. Rouhani is the strongest Reformist that Khamenei was able to swallow as president of Iran without gagging, one Israeli defense official opines. Although he is indeed part and parcel of the Iranian revolution, many variables have changed since. Rouhani and Ahmadinejad stand far apart from each other. In hush-hush meetings, some compare him to Israel’s late Prime Minister Menachem Begin — the first prime minister to hail from the ranks of the Likud — who was the first Israeli leader to sign a peace accord with an Arab country, returning every inch of the Sinai Peninsula to the Egyptians. Will Rouhani be like Begin? Will he rescue Iran from its nuclear adventure, stop it from fueling Islamic terrorism and save it from its international isolation, economic crisis and the tight corner in which it pushed itself? Only time will tell.

Or maybe not. The game isn’t over yet, says another senior Israeli military official. It has just started. We are surprised by the very fact that a game is even on, but the sooner we get used to it and stop being enthusiastic, the better for us. The goods have yet to be delivered. There is no doubt in his mind that if the international community continues the pressure, does not let up and does not blink, if it is able to tell right from wrong and differentiate between lies and truth, then the agreement with Iran stands a good chance of giving the world enough time and ensures that Iran will not be able to break out a nuclear bomb in a short time. There has got to be a security margin between Iran and the bomb of eighteen months to three years, at least. If this can be achieved, we will sigh in relief.

That official was asked what had to be done in order for this to be accomplished. He said that the United States should not forget that it is America. It should not strive to strike a deal at any cost. Iran should be convinced that it would pay a heavy price for derailing the negotiations. It should be made aware that the sanctions resume instantly and on a much broader scale, and that the military option would be real and credible and placed on the table.

In conclusion, the official was asked about Israel’s military option. He confirmed that it was alive and kicking. Much effort, money, creativity and perseverance have gone into it. It's important that Israel have the option to act against Iran if continues its race toward the bomb. And Israel does have that option. On the other hand, he says, we will never regret wars that were averted. At one time, when a war broke out, two armies would confront each other and eventually return home. The civilians were never exposed. Today, war means that everyone is involved. The losses would be catastrophic, and no one will emerge a true victor. At this time, it seems that this can be avoided.

Editor’s Note: A quote from Iran’s Foreign Minister Mohammad Javad Zarif in an interview on a German TV network was originally mistranslated as saying “Once the Palestinian problem is solved, the conditions for an Iranian recognition of Israel will be possible.” This article has been updated to reflect the correct translation of the quote, “If the Palestinians are happy with the solution [an Israel-Palestinian peace deal] then nobody outside Palestine could prevent that from taking place.”