Iran, Israel and the politics of gesture

Iranian and Israeli officials are listening to each other at international conferences. 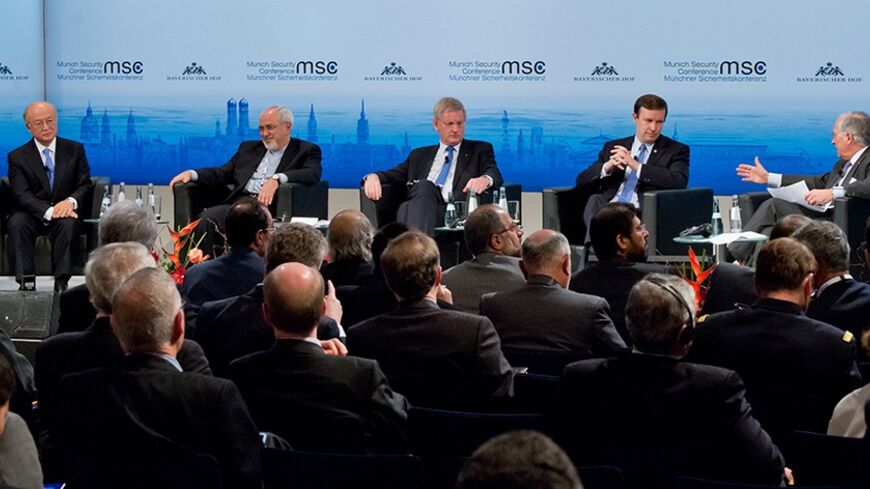 We are witnessing something which has rarely been seen in recent Iran-Israel tensions: a series of goodwill gestures by both sides.

On Feb. 2, Israeli Defense Minister Moshe Ya'alon stayed on for the Iranian foreign minister’s panel at the Munich Security Conference. Ya'alon not only stayed, he sat in the front row, meters away from Iran’s Foreign Minister Mohammad Javad Zarif, who was sitting on the dais as part of the panel. As noted by Times of Israel correspondent Raphael Ahern, this showed a change of strategy, since “just four months ago, [Prime Minister Benjamin] Netanyahu ordered Israel’s delegation to the United Nations to walk out during the speech by Iranian President Hassan Rouhani to the General Assembly.”

In my opinion, there is no chance that Ya’alon would have stayed for the Zarif panel without clearance from Netanyahu.

The next question was: Now that Israel has shown a sign of goodwill, when would Iran reciprocate, if at all?

It seems that Israel was in fact beaten by Iran in the current game of subtle goodwill gestures.

The government of Kuwait, which many Israelis define as part of the “moderate Arab states,” decided to boycott the renewable energy conference in Abu Dhabi that took place Jan. 18-19. The reason? The presence of an Israeli delegation, headed by Water and Energy Minister Silvan Shalom.

But Iran turned up. Not only that, when Shalom spoke, while some senior members of the Iranian delegation moved to the back of the room, Hamid Chitchiyan, Iran's minister of energy stayed at the table, a few meters away from the Israeli delegation. A picture of this rare development was posted on the Israeli Ministry of Foreign Affairs Persian-language Internet site.

As always, when it comes to Iran, we have to read into nuances. This was a sign of change that should not be ignored. Unless suicidal, no Iranian delegate would dare take such a risk without clearance from the very top.

On Jan. 19 at the Abu Dhabi summit, the Iranians left a delegate at the table when an Israeli minister spoke. On Feb. 3, one of the most senior politicians in all of Israel sat in the front row at a session where Iran’s foreign minister was speaking. Was Israel repaying Iran’s earlier goodwill gesture, with interest? Quite possibly. As Ben Caspit wrote in Al-Monitor, some members of the Israeli security establishments are describing the recent changes in Iran since Rouhani’s election as “historic.” The Israeli government probably did not want to leave Iran’s subtle goodwill gesture unanswered.

What increases the sense of optimism is another positive development. The day after Ya'alon sat on the front row at Zarif’s session, in an interview with German TV, Iran’s foreign minister recognized the Holocaust and called it a “horrifying tragedy.” He then went on to say that if a peace agreement with the Palestinians was reached, Iran will make the sovereign decision regarding the possible recognition of Israel. Meaning it may or it may not decide to do so. This in itself is a notable sign of change. No senior politician in office at the level of foreign minister has ever hinted at a scenario where Iran would consider recognizing Israel — not even Iran’s Reformist President Mohammad Khatami, who publicly stated in 2001 that Iran would “never recognize Israel.” According to new reports, Zarif could face a parliamentary grilling for these remarks.

At this stage, there are two important questions to ask: First, what has brought this change to the Iranian government’s approach toward Israel? And second, are these changes temporary or permanent?

The answer to the first question could be related to Iran’s current challenges in Syria. According to statements by former US State Department official Frederick Hof, published on Feb. 1 in the Kuwaiti media outlet Al Rai, “Tehran considers Saudi Arabia its primary enemy, not Israel or the United States.” According to Al Rai, Hof was told this by Iranian officials in a closed-door meeting. According to Hof, he was also told that Saudi Arabia’s “intervention in the Syrian civil war on the side of the rebels poses a strategic threat to Tehran.”

The current proxy war in Syria which Iran is fighting against Saudi Arabia could have persuaded Iranian decision-makers that they should place their focus on the more immediate enemy — in this case the Saudis. To do this, Iran should at least try to reduce tensions, not only with the United States but also with Israel, which, as I noted in a previous Al-Monitor article, has a number of common interests with Iran in Syria.

It's unclear whether the current changes in Iran are temporary or permanent. Opposition toward Israel is still widely supported by the conservatives, who form the majority of the regime (headed by Supreme Leader Ayatollah Ali Khamenei and the Islamic Revolutionary Guard Corps). The regime is far more powerful than the government (headed by Rouhani). What we are witnessing could just be a temporary tactical move by the Iranian government and the regime until Iran’s problems in Syria are resolved.

Or it may be that we are about to see a new strategy, whereby to maintain domestic support among conservatives Khamenei continues with his attacks against Israel and his denial of the Holocaust. But the government, to improve Iran’s standing abroad, tries to subtly send messages of goodwill while recognizing the Holocaust.

There are things that could be done outside Iran to encourage those inside who want to change its Israel policy. Chief among them is to ensure that no Iranian goodwill gesture, no matter how small or subtle, goes unanswered.

[Editor’s note: A quote from Iran’s Foreign Minister Mohammad Javad Zarif from an interview on a German TV network was originally mistranslated as saying "Once the Palestinian problem is solved, the conditions for an Iranian recognition of Israel will be possible."

Correction: The member of the Iranian delegation was incorrectly referred to as a "low-level member"; he was in fact Hamid Chitchiyan, Iran's minister of energy and a member of President Hassan Rouhani's cabinet. Chitchiyan is a former intelligence official with previous positions in the Ministry of Information and Security as well as the IRGC's Intelligence organization.]