Iranian Foreign Minister Mohammad Javad Zarif's visit to Jordan last week was well-received, but there is still is a legacy of mistrust. 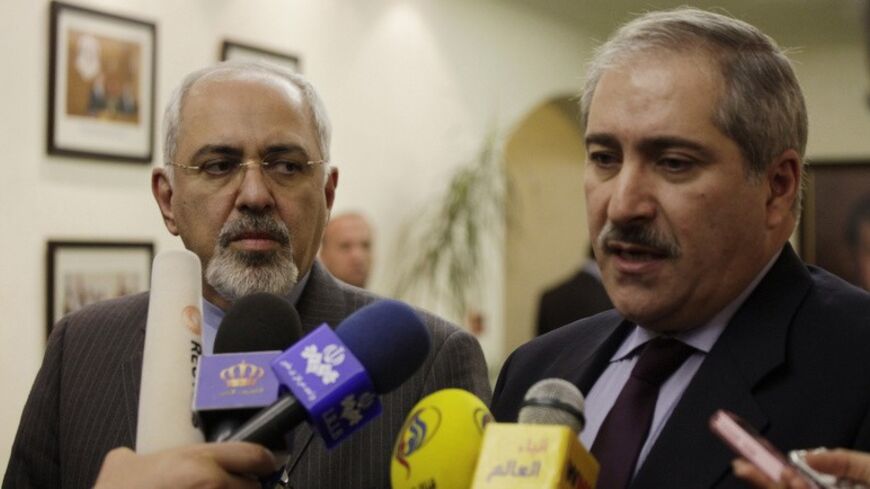 For decades, Jordan-Iran relations were described as tepid at best, with Tehran initiating contacts in hopes of improving bilateral ties. Amman has kept its distance, making sure it does not anger its Gulf allies, especially Saudi Arabia and Bahrain, and the United States. Throughout the years, a number of Iranian envoys visited Jordan and met with top Jordanian officials. Not much came out of such meetings. Under former Iranian President Mahmoud Ahmadinejad relations worsened, as Amman recalled its ambassador and refrained from appointing a new one.

But Iranian Foreign Minister Mohammad Javad Zarif's brief visit on Jan. 14 signaled a possible change. There is a new president in Iran, Hassan Rouhani, with whom the West is eager to do business. Rouhani has sent conciliatory messages to the Gulf states expressing willingness to mend fences and overcome problems. The signing of an agreement between the West and Iran on the Islamic Republic’s controversial nuclear program was an important landmark.

Zarif met with Jordan’s prime minister, foreign minister and King Abdullah, the latter of whom reiterated Jordan’s position on the Syrian crisis, which is based on finding a political solution to “cease the bloodshed and preserve the unity of the country and its people.” The king stressed the importance of resolving the Palestinian-Israeli conflict “in line with the two-state solution and the 2002 Arab peace initiative.” Zarif stressed Iran’s eagerness to coordinate with Jordan on regional and security issues.

Zarif’s regional visit came about a week before the scheduled convening of the Geneva II conference on Syria — in which Iran’s participation is still pending — and in the midst of US Secretary of State John Kerry’s latest tour of the region, during which he discussed proposals for an agreement on final status issues between Israel and the Palestinians.

Political commentator and expert on Islamist issues, Hussein al-Rawashdeh, wrote in the Arabic-language daily Addustour that Zarif carried three files on his last visit to Amman: the Syrian crisis and how Jordan can play a positive role in justifying Iran’s participation at Geneva II; the settlement between the Palestinians and Israel; and Jordan’s mediation efforts between Iran and its Gulf neighbors. Rawashdeh believes that bilateral relations can only improve between Amman and Tehran, especially since Abdullah’s efforts to end sectarian rifts have been backed by Iran.

The last time Abdullah visited the Iranian capital was in 2003, when moderate President Mohammad Khatami was in office. Jordan’s “Amman Message” on religious tolerance in 2004 was welcomed by Iran, which sent senior Shiite clerics to participate in an Islamic conference in Amman.

The Islamic Republic has always looked favorably at the Hashemite rulers of Jordan as the direct descendants of Prophet Muhammad, even in 2004 when Abdullah was the first regional leader to warn of an emerging “Shiite Crescent” arching over the region, from Tehran to Beirut through Baghdad and Damascus.

In 2012, Iran’s ambassador to Jordan declared that Tehran was ready to supply Jordan with free oil and energy for the next 30 years, in return for other goods and allowing Shiite religious tourism to Jordan. Amman politely rejected the offer, which would have allowed tens of thousands of Iranians to visit Muslim shrines that are deemed sacred to Shiites.

Historically, relations between Jordan and Iran under the late shah were very close. Relations deteriorated after Iran's 1979 Islamic Revolution, and when the Iran-Iraq war broke out in 1980, the late King Hussein sided fervently with Saddam Hussein. The king justified this move, saying that Iraq was protecting the Arab world’s eastern flank.

Former Crown Prince Hassan represented Jordan in the August 2012 Non-Aligned Conference held in Tehran. It was the highest-level Jordanian visit to Tehran since 2003. And in a recent workshop held by Al-Rai newspaper, the prince criticized Jordan’s foreign policy and called for normalizing relations with Tehran. He disapproved with the kingdom’s submission to Gulf policies on Iran while ignoring the fact that Tehran is mending its relations with the West.

But efforts to normalize relations often hit unexpected snags, like when commander of Iran’s Basij (volunteer) force, Gen. Mohammad Reza Naqdi, was quoted as saying that his country will mobilize Basij forces in Jordan and Egypt to fight against Israel. He made these statements only a few days after Zarif left Amman. Jordanian Minister of State for Media Affairs and Communications Mohammad Momani immediately denied such reports, adding that the kingdom rejects attempts to interfere in its internal affairs. He called on Iranian officials to refrain from making statements that “hurt bilateral relations.”

Meanwhile, chairman of Jordan's Lower House Foreign Relations Committee, Hazem Qashou, told Al-Monitor that Jordan should have a balanced relationship with both Iran and Turkey. He said Iran is playing a major political role in Iraq and Syria, and that Tehran should not be excluded from the peace conference in Geneva next week. Qashou said the Arabs should solve complex problems with Iran through dialogue.

It is not yet clear if relations between Amman and Tehran will witness a thaw any time soon. The first signal would be for Jordan to appoint a new ambassador to the Islamic Republic. Public opinion is still divided on Iran, according to political analyst and columnist Mahmoud Rimmawi. He said Iran’s involvement in the Syrian crisis and its backing of Hezbollah and at least 10 extremist groups with links to Iraq underline its dangerous role there. He said Iran wants to participate in Geneva II to sabotage it. Otherwise, he told Al-Monitor, Iran would have adopted the Geneva I principles as a sign that it supports a political transition in Syria.