Facebook has enabled a new openness in Palestinian society, but also offers temptations of infidelity. 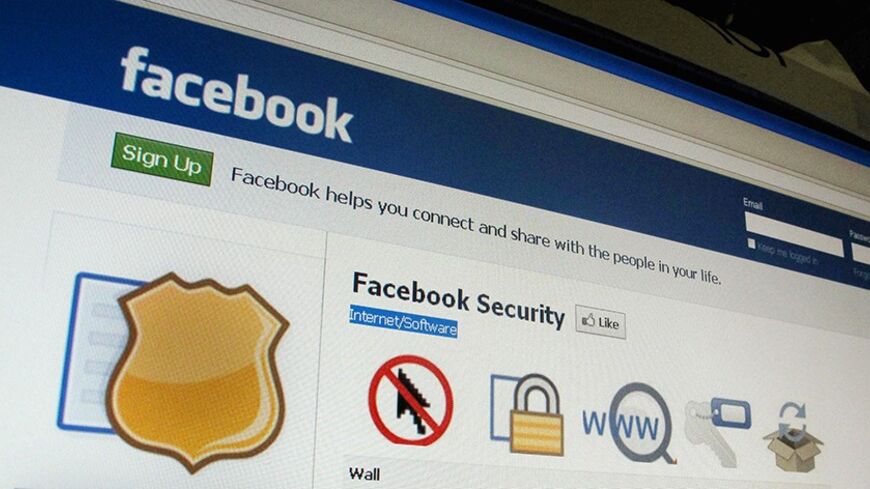 GAZA CITY, Gaza Strip — The Facebook chat that young Yasser discovered between his wife and one of her friends was reason enough for him to accuse her of infidelity and divorce her.

Yasser, 27, who requested that his full name not be revealed, considered his wife’s chat with one of her Facebook friends a “cruel act of betrayal.” This was not the first time that he had seen conversations between his spouse of almost three years and strangers of the opposite sex, conversations that fall contrary to Palestinian society’s customs and traditions.

“I repeatedly warned my wife against chatting with strange men, but she kept doing so," the young man told Al-Monitor. "She claimed that it was only for fun, that nothing was out of the ordinary and that she did not disclose any personal information about herself. But I was shocked by the last chat I saw between her and another man, who called her 'my love.' That was the last straw that drove me to end our marriage.”

Social networking sites, particularly Facebook, have become one of the common causes for divorce in the Palestinian territories, according to Chief Justice Sheikh Yusuf Adeis.

In an interview published on the local Al Quds newspaper’s website Jan. 28, Adeis said, “There are many reasons leading to divorce in our country, among them the prevailing social circumstances and social networking websites such as Facebook.”

Yasser is not the only person blaming Facebook for his divorce. Yasmine, 21, also recently finalized her divorce from her husband, whom she described as a “stalker of women on Facebook.”

“My husband used to spend many hours on Facebook,” she told Al-Monitor. "At first, I did not understand the danger that this posed to our relationship. But after discovering his many friendships with women, I realized that his behavior was insulting and completely detrimental to our relationship."

She explained that she could not put up with a husband who spent an inordinate amount of time chatting with women on social media sites about the secrets of their love life as well as, occasionally, his own personal problems. She indicated that this led to increasing suspicions, which drove their relationship to the point of divorce.

The annual report published by the chief justice’s office confirmed that divorce rates among Palestinians had risen to 20% in 2013.

The report indicated, “This rate is high and necessitates attention, particularly considering that divorce among young people was extremely prevalent, whereby their rate was close to 50% of all divorce cases.”

Amal Abu Amer, the director of the Secret Center for Educational and Family Consultations, also confirmed that her experience with marital cases similar to those of Yasser and Yasmine “indicated that this phenomenon has become commonplace and is now part of Islamic court proceedings.” There are no official statistics blaming Facebook for many of the divorces taking place in the Gaza Strip.

“Young Palestinian men like to befriend girls on Facebook, yet, at the same time, they are not amenable to their sisters having male friends. This also applies to husbands who permit themselves to chat with women, but forbid their wives from doing the same with men. This leaves wives with an impression that their husbands are cheating,” Abu Amer told Al-Monitor.

Psychologist and sociologist Ahmed Hamd explained that the technological advances that have permeated Palestinian society lately have helped effect many positive changes to that society, particularly in terms of people rebelling against social introversion mores. But, Hamd opined, this has also had negative repercussions that result in the disintegration of newly formed marriages.

Hamd told Al-Monitor that divorces caused by Facebook usually came about as a result of one of the spouses befriending someone of the opposite sex. This leads to a comparison being made between the life partner and the friend, all in the context of this virtual world. Consequently, suspicions begin to grow between the couple, culminating in divorce.

“In most cases, a spouse resorts to chatting with members of the opposite sex on Facebook as a result of a psychological or emotional void that he or she might feel, to compensate for any deficiencies or apathy that might exist in their marital life, or because of a lack of communication between the couple,” Hamd said.

He pointed out that Palestinian society considers this phenomenon a source of concern. The relationship between the husband or the wife with a third party might evolve into a deceitful one, leading to actual adultery. Thus, this transforms an initially innocent situation into one that is dishonest, according to Hamd.

For Abu Amer, prolonged access to these social networking sites “increases the chance of marital infidelity." He said, "Chats between one of the spouses and another person on social networking sites sometimes lead to marital secrets being divulged, and may increase the possibility of an emotional bond forming with the other party.”

Hamd went on, “In the decades that preceded the advent of such technological advancements to the Palestinian territories, it was difficult for young men and women to talk about their personal lives. But today, their ability to casually reveal their thoughts on social networking sites has led to an unexpected and unforeseen level of openness in society. This, in turn, resulted in the appearance of certain social problems.”

Hamd agreed with the prevalent view among Palestinians that innocent relationships between a spouse and a member of the opposite sex via social networking sites can evolve into actual infidelity. He indicated that Palestinian society was warily embracing technical developments, particularly access to social networking sites, for fear that such developments would detrimentally affect social values such as honor and dignity.

In reference to Hamd’s opinion that awareness programs aimed at young couples were needed to educate them about the proper use of social networking sites and prevent divorces from happening, Abu Amer said that women's and family centers in the Gaza Strip did not usually provide such programs for couples, due to the newness of this phenomenon.