Although the Lebanese in general, and the residents of Beirut’s southern suburbs in particular, felt relieved after security breakthroughs and arrests, their fears have been renewed since the Feb. 19 twin attacks in Bir Hassan. 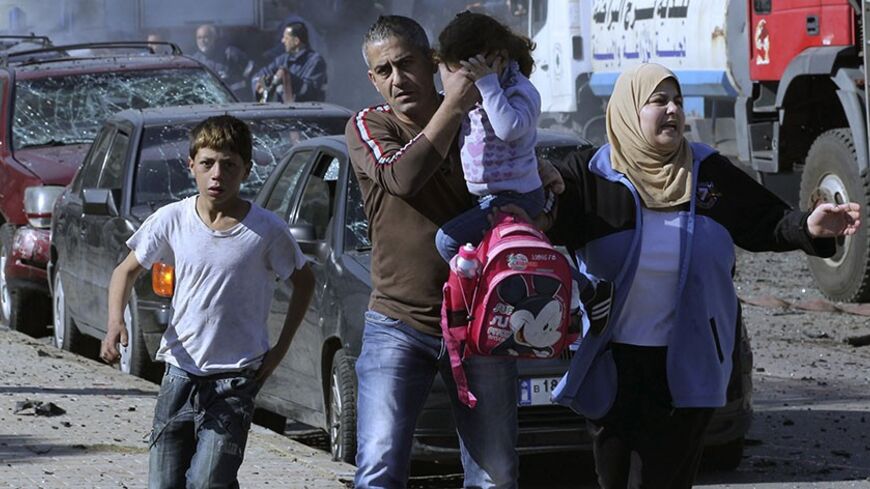 Civilians run from the site of an explosion in the southern suburbs of Beirut, Feb. 19, 2014. - REUTERS/Mahmoud Kheir

The Lebanese army’s Feb. 12 arrest of Palestinian Naim Abbas, a leader of the al-Qaeda-affiliated Abdullah Azzam Brigades, led to great relief among the Lebanese in general and the inhabitants of Beirut’s southern suburbs and the Hermel region in particular. This arrest followed a recent spate of terrorist bombings that targeted those two areas. But the twin suicide bombings against the Iranian Culture Center and its surroundings on the morning of Feb. 19 dissipated this optimism and signaled the return of fear, caution and sadness to the southern suburbs.

The latest twin suicide attacks against the Iranian Culture Center took the lives of seven people and injured more than 100 others. Yet, no center employees were wounded. The victims were mainly inhabitants of the area, passersby and a few children from the orphanage of the Islamic Foundation, a well-known Sunni charity.

The suicide bombers simultaneously targeted the street with two explosives-laden cars in a manner similar to the attack perpetrated against the Iranian Embassy in Beirut in November. The Abdullah Azzam Brigades claimed responsibility for the Feb. 19 attack, which it said came in response to Hezbollah’s actions in Syria. The brigades vowed to conduct further attacks.

The two explosions perhaps negated the effects of the breakthrough achieved by Lebanese army intelligence when it apprehended Abbas. It also reduced the optimism engendered by the formation of a new government on Feb. 15, among the Lebanese in general and the southern suburb’s inhabitants in particular.

Noteworthy was that the street targeted on Feb. 19 was the location of Hezbollah’s Al-Manar television station; Abbas had confessed that he had been planning an attack against the broadcast facility. The two explosions, however, occurred hundreds of meters from Al-Manar's office, closer to the chancellery near the Kuwaiti Embassy. This choice of target perhaps resulted from Abbas’ arrest and confessions.

In a statement released Feb. 19 claiming responsibility for the attack, the Abdullah Azzam Brigades further announced that it would continue “to pursue Iran and its party in Lebanon; targeting their security, political and military installations to achieve two just goals: First, the withdrawal of troops belonging to Iran’s party from Syria, and, second, the release of our prisoners from oppressive Lebanese prisons.”

These unattainable demands indicate that the battle will be long, and that the issue goes beyond Hezbollah’s participation in the Syrian war. For now, the demands included the release of convicted terrorists jailed in Lebanon, which the secretary-general of Hezbollah, Hassan Nasrallah, alluded to during his televised speech on Feb. 16.

Sheikh Ali, a Shiite cleric with close ties to Hezbollah, told Al-Monitor that it would be erroneous to think that a solution exists to put an end to the bombings. According to him, the only solution lies in overrunning and controlling the Syrian city of Yabrud, where the explosives-laden cars were prepared before being sent to Lebanon. He expressed surprise that the Lebanese media, in their coverage of the bombings, constantly repeated that innocent people were targeted, as if to allude that other targets would be legitimate ones to attack in the southern suburbs.

Political analyst Nassib Chams, the manager of the Gamma Group for Communication and Information, told Al-Monitor that the morale of people in the southern suburbs varied depending on who they were and their overall outlook. Some people think that what is occurring is nothing but a war against a faceless enemy, and this worries them. Others are conducting their daily lives in a somewhat normal fashion as a result of their religious faith. Still others just live in fear and anxiety. Chams added that security officials did not feel relieved after the arrest of Abbas. On the contrary, added security measures and tightened scrutiny were adopted because they thought that the arrest would be followed by a harsh, painful and nervous reaction, according to Chams. The twin explosions near the Iranian Cultural Chancellery were thus an indication that softer, easier targets were being sought, and security officials know very well that suicide bombers are nearly impossible to stop unless they surrender of their own volition.

As for the solution, Chams said, “There are no political or security solutions for such bombings, because the issue is complex and interrelated. Further fortification and healing of the rift inside Lebanon is needed. Let's not forget that major powers were at a loss to deal with terrorism; thus, how can we expect a small country with limited capabilities to achieve such a goal? Lebanon has now entered a long tunnel.”

Political analyst Ghassan Mukahal told Al-Monitor that the twin attack was significant in scope but a failure insofar as results are concerned, if compared with the objectives in place. It was also a failure on a political level and stirred the resentment of factions not the least friendly with Hezbollah. He added that the operation was important given that it occurred as a speedy response to the arrest of Abbas, and the formation of the Lebanese government, giving the impression that it was an attempt to hit at the optimism of the populace. Mukahal also indicated that the suicide bombers were seemingly facing great difficulty in entering the southern suburbs, and were now targeting the areas surrounding it. Furthermore, the attack’s occurrence close to the orphanage of the Islamic Foundation was an additional factor that contributed to the operation’s failure on a psychological and political level.

“Its failure to damage Iranian targets and the damage that it inflicted to the orphanage at this stage, when political and popular optimism prevailed, make it a failure in my opinion. It appeared to go against the prevailing current in the country right now,” Mukahal added. He also thought that the terrorists would face added blows, specifically from security and intelligence services that want the situation to improve, despite their inherent animosity toward Hezbollah.

Mukahal further indicated that Abbas’ arrest carried significant meaning, for it reflected that international and regional factions desired to put the brakes on such terrorist operations and prevent the situation from further deteriorating. He added that Abbas had connections with numerous organizations and even with the intelligence agency controlled by an influential actor on the Lebanese scene. Mukahal claimed that Abbas' arrest came as a result of information shared by a regional intelligence service allied with the Americans.

For his part, strategic expert Imad Marzouk told Al-Monitor that the criminal mastermind behind the security incidents in Lebanon wanted, at this particular point in time, to reveal a specific piece of the puzzle, and thus leaked information about Abbas hours before he carried out the operation. Marzouk thus drew links between the incident and the political regional-international compromise that accelerated the formation of a Lebanese government.

In this regard, Abbas’ confessions led to the discovery of an explosives-laden car in a Beirut parking lot, loaded with approximately 100 kilograms (220 pounds) of explosives, which were defused by the Lebanese army. He also confessed that a second explosives-laden car was headed from the Syrian Yabrud region toward Beirut with three women on board. The army again succeeded in intercepting and defusing the car.

According to Abbas’ confessions, the operation was supposed to be complex and multi-layered, whereby two suicide bombers would detonate the two cars and a third suicide bomber would detonate his explosive belt amid the throngs who would gather around in the aftermath of the first explosion. These explosions would be followed by a volley of Katyusha rockets aimed at the Master of Martyrs Complex during the Martyrs Day celebration on Feb. 16 in the southern suburbs. The Lebanese army managed to find this operation’s rocket and explosives depot in the town of Dibbiyeh, south of Beirut.

Abbas is dangerous because he was a member of the Palestinian Islamic Jihad movement, which he left a few years ago to join al-Qaeda. He also trained in Iran and was very familiar with the southern suburb and Hezbollah’s operations.

A source close to Hezbollah, who requested anonymity, told Al-Monitor that despite the importance of army intelligence’s achievement on a security level, caution must be exercised and work conducted to eradicate all areas that served as incubators for terrorists in Lebanon — from the Bekaa Valley, to the north, and inside Palestinian camps. He pointed out that the need was great for Palestinian factions to more actively labor to uncover those terrorist networks inside the camps and hand over the accused to Lebanese security forces.

Speaking to Al-Monitor, journalist Hussein Shamas said that the operation conducted by the Lebanese army’s intelligence services was both a pre-emptive measure and an attack that constituted a great achievement in the annals of the military institution. This is because it led to great relief among the Lebanese in general and the inhabitants of the southern suburbs in particular. Yet, this relief was accompanied by extreme panic and caution engendered by the increased amount of explosives used, and the leaked intent to target the suburbs with rockets. Shamas did not consider that the security checkpoints to be sufficient. He said that they did limit the number of these attacks, yet remained unable to completely stop them, in light of the primitive search methods being employed and the lack of sophisticated detection equipment. He added that confronting terrorist operations required herculean intelligence efforts, popular cooperation with those intelligence services, as well as a determination to deprive the terrorists of their supportive havens in the Palestinian camps that had become a refuge for those extremists.

In this regard, journalist Loubna Yehya told Al-Monitor that the measures employed by the security forces in the southern suburbs were insufficient and in need of a better methodology, pointing out that detection equipment must be used to uncover explosives and booby-trapped cars. Journalist Zainab Jammoul also told Al-Monitor that anxiety and fear had resurfaced after the Bir Hassan twin explosions. She added, “We will never feel totally comfortable until the Syrian crisis comes to an end.”