The suicide bombing targeting the Iranian Embassy in Beirut on Nov. 19 shows that al-Qaeda has established both tactical and ideological cells in Lebanon. 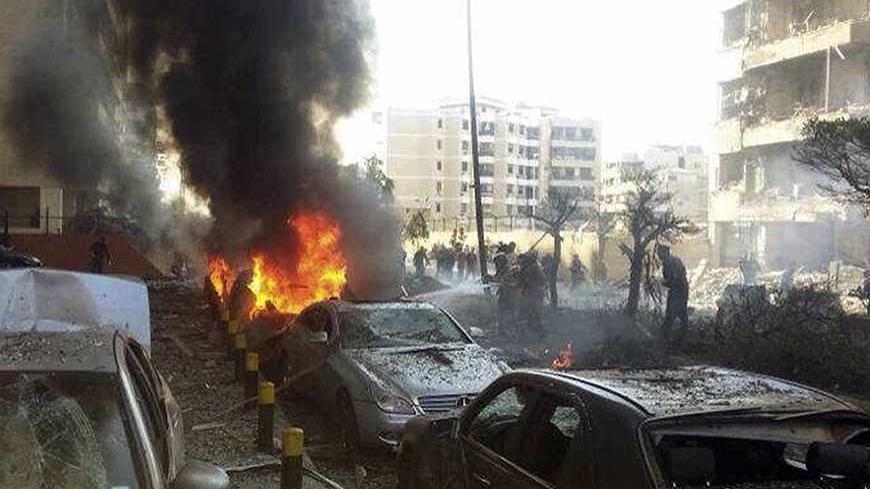 Civil Defense personnel extinguish a fire on cars at the site of the explosions near the Iranian Embassy in Beirut, Nov. 19, 2013. - REUTERS/Ahmad Yassine

The worst expectations that prevailed in Lebanon’s security and political spheres during the last few weeks, about the possibility of Lebanon following the Iraqi model, actually came true. The accumulation of intelligence by Lebanese authorities in the last few days all pointed to such a probability. Most worrisome was information that al-Qaeda was preparing to launch terrorist attacks against Ashoura rallies organized by Shiites in Lebanon, in a manner that would spread, into Lebanon, the ongoing violent Shiite-Sunni Iraqi conflict.

But, the most dangerous aspect of the twin bombing attacks that rocked Beirut’s southern suburb on Nov. 19 was the targeting of the Iranian Embassy in Lebanon. This reflects, in form, a further souring of political relations between Tehran and Riyadh. The second dangerous aspect was that the attack was executed in a style reminiscent of the continuing terror campaign that rages on in Iraq between Sunnis and Shiites.

Current information about the twin suicide attacks point to a suicide bomber on a motorcycle detonating himself in front of the embassy, as an explosives-laden car followed behind to execute the second stage of the attack. The attack planners, based on the results of previous such attacks by al-Qaeda in Iraq, expected that the first explosion would breach the outer embassy wall, thus allowing the explosives-laden car to enter the embassy building and detonate inside it.

What prevented the Iranian Embassy in Beirut from being transformed into a pile of rubble were the numerous defensive concrete blocks that surrounded the compound, which prevented the car from entering the courtyard.

Yet, the mistake committed by those living near the embassy was that they rushed to examine the site of the first explosion, making themselves, in the process, an appetizing target for the suicide driver of the explosives-laden car who detonated himself in their midst, in an attempt to atone for his colleague’s failure to open a breach in the embassy wall through which he could enter the building’s courtyard.

The attack against the Iranian Embassy in Beirut was the first of its kind that directly targeted Iranian interests in Lebanon. Furthermore, the timing of the attack suggests that the ongoing war in the region between the axis of Islamist Salafist Sunni movements and Iran — which had been raging on in Syria and Iraq — has now reached Lebanese soil.

Despite the fact that the Iranian Ambassador to Lebanon Ghazanfar Roknabadi quickly accused Israel of standing behind the attack — an accusation later echoed by the Iranian Foreign Ministry — suspicions in Lebanon center around characterizing the incident as being part of Salafist reactions to the Syrian regime’s attack on the Qalamoun region during the last few days. According to the Syrian opposition and the press of some countries that support the opposition — such as Saudi Arabia — this attack was carried out with support from Hezbollah and Iran’s Revolutionary Guard. To many observers in Lebanon, the occurrence of the attack in Beirut was not a surprise, considering the fact that they had anticipated the battle for Qalamoun to be accompanied by Salafist bombings targeting Hezbollah in Lebanon. Sunni jihadist Salafists accuse the latter of successfully supporting the Syrian regime army in Qalamoun.

From the point of view of a security source who spoke to Al-Monitor on condition of anonymity, the dangerously distinguishing factor in this attack, when compared to previous bombings, was that this time it was carried out by suicide bombers. This indicates that al-Qaeda, regardless of whether it is controlled by foreign entities, has established not only security and military cells in Lebanon but also ideologically motivated cells.

The same source pointed out that the use of suicide bombers in terrorist attacks is positive proof that al-Qaeda, or extremist Islamist organizations espousing the same ideologies as the latter, executed the attacks. He added that security services tend to suspect that official intelligence services are responsible when a remotely detonated bomb is used, such as the ones that exploded in the southern suburb and Tripoli during the last few months. But suicide attacks bear the clear hallmark of al-Qaeda that executes them through its fanatical members.

The prevailing concern in Lebanon after the Iranian Embassy bombing of this morning is that Lebanon may have entered the first stage of being “Iraqized,” and the most pressing question right now is: “Where will the next explosion occur?” In other words, was this the beginning of tit-for-tat bombings between Lebanon’s Shiites and Sunnis, in a manner similar to what has been going on for years in Iraq, and reaping the lives of tens of thousands of people?