On Feb. 1, a suicide attack targeted the Shiite-majority town of Hermel in Lebanon's Bekaa Valley, the fifth suicide attack against Shiite areas in less than three months. 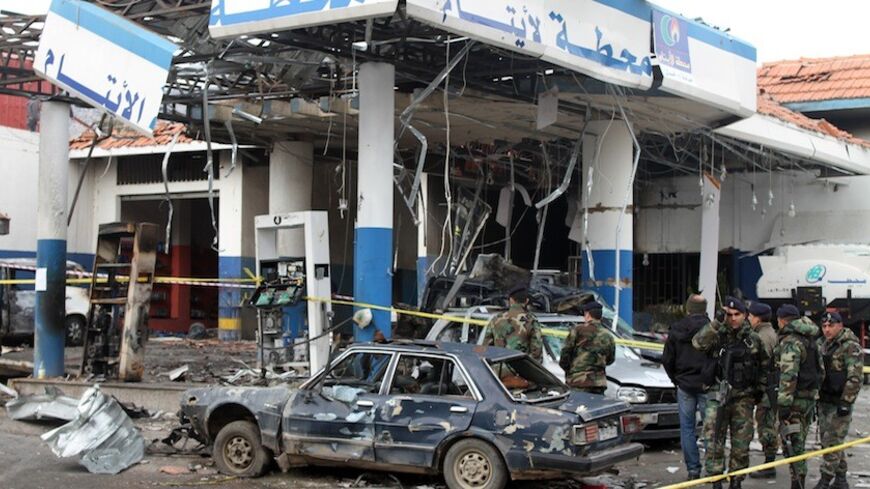 Lebanese army soldiers stand guard at the site of a car bomb, that targeted Al-Aytam service station the day before and left at least four people dead, in the town of Hermel, in Lebanon's eastern Bekaa valley, Feb. 2, 2014. - AFP/Getty Images

A correspondent in Beirut
February 2, 2014

A bloody duel continues in Lebanon between some groups that are known and others that are not known. Saturday, Feb. 1, witnessed the most recent bout in this duel, as a suicide bombing took place in the town of Hermel in the Bekaa Valley. This town has a Shiite majority and is located in the northeast corner of Lebanon. It is on the border with Syria, a country that has been plagued by an explosive internal and external war for three years, with the fragments of this war often reaching Lebanon.

The terrorist attacks and suicide bombings in Lebanon are a war between Sunni fundamentalist groups belonging to al-Qaeda — such as Jabhat al-Nusra and the Islamic State of Iraq and al-Sham (ISIS) — and Shiite Hezbollah. Innocent civilians have been hit by successive explosions, bringing the bloody conflict into the realm of atrocious war crimes.

In the midst of al-Qaeda's war against Hezbollah and the ongoing Sunni-Shiite battle in much of the Islamic world, observers should not lose sight of another aspect of the confrontation. It is also tied to a political battle between Saudi Arabia and Iran — the two fiercest states in the conflict — that stretches from Yemen and Bahrain to Iraq, Syria and Lebanon. In terms of numbers and statistics, it can be said that the blast that targeted Hermel on Feb. 1 was the eighth bombing in Lebanon since the Syrian war extended into the Lebanese interior and targeted Shiite regions, and the fifth suicide attack carried out via fundamentalist Sunni organizations linked to al-Qaeda. Here is a quick and concise summary of these attacks:

But alongside this war of explosions there is another battle, no less ferocious, occurring between the official Lebanese security services and the heads of terrorist networks carrying out attacks. This battle, which has coincided with the chain of explosions, has achieved a number of accomplishments in the form of harsh blows to the terrorists. This is something we will cover in detail in a later article.