Lebanon fights back against terrorists

Despite the ongoing terrorist attacks in Lebanon, the country’s authorities have made significant arrests in their war against terror. 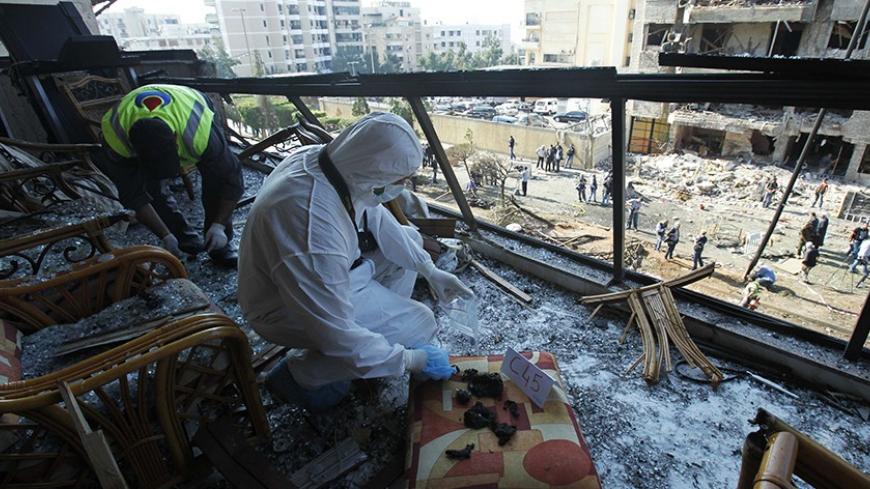 A forensic inspector collects evidence at the site of the two suicide bombings that occurred at the Iranian Embassy compound, Beirut, Nov. 20, 2013. - REUTERS/Sharif Karim

A correspondent in Beirut
February 3, 2014

In a scene fast becoming familiar, a suicide bomber blew himself up yesterday in a van headed to Beirut’s Shiite majority southern suburbs wounding six. The war between the Sunni terrorist groups targeting civilians in Lebanon and Lebanese intelligence seems equalized at this point. After eight bombings in Lebanon, including five suicide attacks, it seems clear that Lebanese intelligence has made several achievements in the war against terror.

Official sources have confirmed to Al-Monitor that there are two other detainees under interrogation (whose identities have not been revealed yet), and anti-terror efforts are ongoing. Below is a summary of recent achievements covered in the local media:

Arrest of the emir of the Abdullah Azzam Brigades, Saudi national Majid al-Majid

Majid was the third Saudi to assume the leadership of the Abdullah Azzam Brigades. Qarawi used to be its military commander and Suleiman Hamad al-Hablain was one of its explosives experts. Two days after Majid was detained in Beirut, his arrest was officially confirmed after DNA tests confirmed his identity. A medical source familiar with Majid’s case warned that the latter’s health was deteriorating as a result of acute renal failure. On Jan. 4, Majid was officially declared dead.

Political and media circles in Lebanon bemoan the trove of information that was lost with Majid’s death. But Majid did leave behind important clues for the Lebanese authorities.

On Jan. 15, Lebanese intelligence arrested the accused, Jamal Daftardar, in Kamed al-Lawz, western Bekaa Valley. It had found that a phone number was left with the information center of Beirut’s Makassed Hospital, where Majid was held, by someone who claimed to be one of his acquaintances and inquired about Majid’s health, who entered the hospital under a false identity.

Intelligence services traced that number to Daftardar, who was Majid’s successor as head of the Abdullah Azzam Brigades. Daftardar was hiding in the western Bekaa Valley under the alias Mohammad al-Masri and claiming that he was a Syrian refugee from Qusair.

Following a raid, the military announced the arrest of Daftardar, nicknamed Abu al-Bashaer and one of Fatah al-Islam’s leaders. His name had appeared in the indictment issued by the Lebanese judiciary in 2007 after the Nahr al-Bared battles between the army and terrorists, including members of the Abdullah Azzam Brigades.

On Jan. 30, the Lebanese judiciary indicted Daftardar and a dozen others whom the investigation into Daftardar revealed belonged to the al-Qaeda-linked Abdullah Azzam Brigades and the Ziad Jarrah Brigades. It should be noted that Ziad Jarrah was a Lebanese al-Qaeda member who was part of the Sept. 11 attacks in New York and Washington.

On Jan. 22, the Lebanese army arrested Sunni Sheikh Omar Ibrahim al-Atrash, nicknamed Abu Omar, after obtaining information that he was associated with terrorists inside Syria and had formed a terrorist cell comprised of Lebanese, Syrians and Palestinians.

The army command said in a Jan. 30 statement that the detainee admitted to being connected to the fugitives Omar Ibrahim Saleh (alias Abu Farouk), Naeem Abbas, Ahmed Taha and others who belong to the Abdullah Azzam Brigades, the Islamic State of Iraq and al-Sham (ISIS) and Jabhat al-Nusra. He also admitted to moving cars rigged with bombs to Beirut as well as bringing to Lebanon explosive belts, hand grenades and various kinds of ammunition.

In one of the cars, a Jeep Cherokee, he brought suicide bombers armed with explosive belts. They were later killed at two army roadblocks near the Lebanese city of Sidon after Atrash had handed them over to Abbas along with the Cherokee, which blew up at a later date.

Accompanied by the so-called Abu Farouk, Atrash brought another car that would also blew up. The army statement said that Atrash confessed to moving suicide bombers hailing from various Arab nationalities into Syrian territory and handed them over to Jabhat al-Nusra, as well as bringing four rockets from Syria and firing them from Hawsh al-Omara in the western Bekaa Valley on Israel Sep. 22, 2013, in addition to receiving four other rockets days before his arrest from the so-called Ahmed Taha.

In other information leaked to the media about Atrash’s confessions, he helped move car bombs from Syria to Lebanese territory. One was a BMW X5 and another was a Jeep Cherokee. It should be noted that the car used in the suicide attack in Hermel, the Bekaa Valley, on Feb. 1, was a Jeep Cherokee.

These dangerous detainees were added to many others who previously had been arrested on suspicion of belonging to terrorist groups. In April 2012, the Lebanese General Security Directorate announced the arrest of a suspected Jordanian national named Abdul Malak Abdul Salam. It was said that US intelligence led to his arrest on charges of belonging to al-Qaeda. Then on Oct. 25, 2012, Lebanese intelligence announced the arrest of Rafiq Mohammed Arif (a Malaysian who is fluent in Arabic) and Mohammed Razin Shaaban (another Malaysian) at a hotel in Hamra, ​​Beirut, and referred them to the relevant court on charges of belonging to al-Qaeda.

It was later revealed that the detainees were recruited in Malaysia in 2007 by a Malaysian national named Mostafa Mansour. They then moved to Yemen, where they met al-Qaeda elements. They were arrested in 2007 in Yemen, and while in prison met Jamal al-Badawi, who is accused of bombing the American destroyer USS Cole.

On May 10, 2013, Lebanon’s army command announced, “As a result of the investigation and intensive follow-up, the Intelligence Directorate was able on May 6, 2013, to arrest elements belonging to a suspect cell. They had in their possession a quantity of explosive devices and detonators.” On Oct. 12, 2013, the arrest of an al-Qaeda computer expert by the Lebanese General Security Directorate was announced.

It seems that it will be a tough and long fight. On July 11, 2013, various Lebanese media outlets reported that a meeting was held between the Lebanese president and the prime minister to look into US information that al-Qaeda had brought in some 16 tons of explosives to Lebanon.

It should be noted that al-Qaeda is now publicly claiming attacks on Lebanese territory. On Jan. 23, a video appeared on various websites declaring the founding of an ISIS-Lebanon branch, led by the so-called Abu Sayyaf al-Ansari.

Furthermore, the Marwan Hadid Brigades, which is affiliated with Abdullah Azzam Brigades and Jabhat al-Nusra in Lebanon, has claimed responsibility for the rockets fired on Lebanese regions in the northern Bekaa Valley from inside Syria in December 2013. These three groups have also claimed responsibility for the bombing of civilian targets in Lebanon.