Residents of Beirut’s southern suburbs live in fear of attacks

Following a string of attacks by extremist groups targeting the mostly pro-Hezbollah southern suburbs of Beirut, locals in this area carry on with their lives, although with tightened security measures. 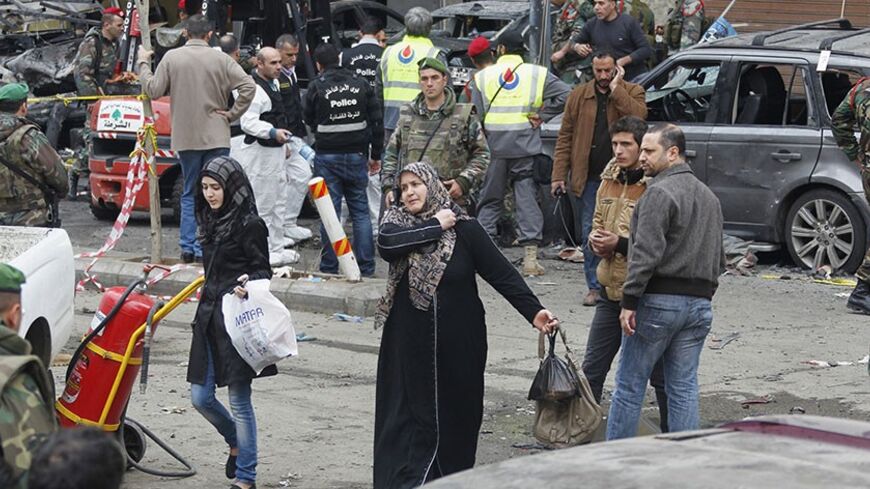 Women walk past as Lebanese army soldiers gather at the site of an explosion, in the Haret Hreik area in the southern suburbs of Beirut, Jan. 22, 2014. - REUTERS/Sharif Karim

Since the summer of 2013, terrorist bombings have targeted the southern suburbs of Beirut and the Bekaa Valley. These were followed by threats from Jabhat al-Nusra in Lebanon and the Islamic State of Iraq and al-Sham (ISIS) of new attacks in Shiite areas that represent a welcoming environment for Hezbollah. It is no secret that these attacks have caused a state of confusion among residents of these areas, especially in the southern suburbs and the Bekaa Valley.

One could even say that many of the civilians residing in these areas are living with a "phobia" of explosions, and wait fearfully for the next blast. This is despite the fact that a large group of these people support Hezbollah — on both the religious and political levels — and believe that these sacrifices are necessary in the service of this political-religious line. According to them, these are sacrifices for the sake of God, to save the doctrine of the household of the prophet in the face of fundamentalist Wahhabi extremist groups.

Al-Monitor met with Ahmed Hossam, a pro-Hezbollah interior designer who resides in the Haret Hreik district in the southern suburbs. This area was targeted by four explosions in the span of about six months, which left more than 35 dead and dozens wounded. Hossam said that he leaves fate to God and trusts in him, and that he does not think about the next explosion and how to avoid it. Hossam explained that he knows it is nearly impossible to prevent suicide attacks, and he expects they will continue for the foreseeable future.

Ali Mahdi, a merchant who owns a clothing shop on Bir al-Abed street in Haret Hreik, complained to Al-Monitor about the effect these explosions are having on his business. According to him, some customers are afraid to visit the area, while others are unable to park their cars as a result of the security measures being taken in the neighborhood. Mahdi said that while business has decreased in Lebanon ever since the beginning of the Syrian crisis, it gets worse the longer the crisis goes on and the more the spark of war or explosions stretches to Lebanon, especially in Beirut's southern suburbs. However, he believes that this is a price that must be paid in this brutal war against "the resistance" and its stronghold, and that money becomes insignificant when compared to the sacrifices of the martyred and wounded.

Al-Monitor spoke with Rowan Hussein, who lives with her family on Al-Arid Street in Haret Hreik, which was targeted by two suicide attacks in January. According to Hussein, she and her family miraculously survived the most recent attack and she is searching for a house to rent outside the southern suburbs, since she fears the street will be targeted for a third time.

Yet, many of the residents of the southern suburbs, especially in Haret Hreik, do not share Hussein's desire to flee the area. Some shop owners have even placed sandbags in front of their stores to protect themselves, their employees and their customers in the event that another suicide attack occurs. One shop owner on Al-Arid Street told Al-Monitor how one of his friends was killed while sitting next to him in his shop when the most recent explosion occurred on Jan. 21.

Many residents of the southern suburbs admit that they are using side roads and avoid traveling on main roads in the area, especially after the warning issued by Jabhat al-Nusra in Lebanon on Jan. 24. This statement noted that areas where Hezbollah has a presence are "legitimate targets" and called on the Sunnis of Lebanon to stay away from these regions.

The statement, published to the group's Twitter account, announced, "The 'Party of Iran' [Hezbollah] and all its security and military bases and strongholds are a legitimate target for us wherever they may be found." It noted that Hezbollah "has spread itself in populated areas, [hiding among civilians to protect themselves]." The statement warned Sunnis in Lebanon against "approaching or residing in or near [Hezbollah's] areas" and to avoid gathering around its meeting points.

A source close to Hezbollah, who spoke on condition of anonymity, told Al-Monitor, "This provocative sectarian terrorist statement came after a number of our Sunni brothers, including both Lebanese and Syrian citizens, died in the explosions in the southern suburbs." The source expressed his surprise at how the head of the Future Movement, former Prime Minister Saad Hariri, equated Hezbollah with al-Qaeda in a statement released on Jan. 25, in which he said Lebanon's Sunni Muslims refuse to be dragged into the conflict between Hezbollah and al-Qaeda. By doing this, Hariri equated the criminal with the victim, according to the source.

The same source pointed out that Hezbollah has taken security measures in the southern suburbs, the Bekaa Valley, South Lebanon and Beirut, but it has not announced these measures to ensure their secrecy on the one hand, or to surprise the terrorists on the other. He noted that Hezbollah, in cooperation with the Lebanese security services and in particular Lebanese Army Intelligence, has succeeded in dismantling a number of car bombs. They have also arrested a number of terrorists and potential suicide bombers and pursued others and clashed with them, but these operations were not announced.

The source denied the leaks published by some newspapers and websites, asserting that a number of Hezbollah's centers and leaders have moved out of the southern suburbs. He added that the party has abandoned what was known as the "security perimeter" zone after the Israeli attack in the July 2006 war destroyed most of the buildings in this zone. Now, according to the source, the majority of the party's centers are secret, with the exception of some social and media centers.

The source said that the Lebanese security services face difficulties in their work against terrorist groups — which include Syrians, Lebanese and Palestinians — because of the presence of a welcoming atmosphere for these groups on the one hand, and because of the political, religious and sectarian cover some of their wanted members enjoy on the other. The source noted that a number of clerics staged a sit-in in front of the Lebanese Ministry of Defense on Jan. 26, to demand the release of Sheikh Omar al-Atrash. The latter has been detained by Lebanese Army Intelligence on charges of transporting suicide bombers and explosives-laden cars. The judiciary has yet to complete the investigation and announce whether Atrash is innocent or guilty.

The source complained that the political and sectarian polarization in the country has hindered the work of the security services and, for example, prevented them from stopping terrorists from infiltrating the Syrian-Lebanese border into Arsal and then to the Bekaa Valley and Beirut to carry out car bombings. Moreover, the absence of an official security presence in the Palestinian camps and the presence of hotbeds for terrorist groups in some of these camps makes things harder. This is especially true of the Taamir neighborhood in the Ain al-Hilweh refugee camp. The same source noted that the suicide bomber involved in the most recent attack came from the Sabra refugee camp in Beirut, and traveled to Haret Hreik, where he blew himself up.

The source said that although explosives-laden cars are coming from Syria through Arsal, or from some of the Palestinian camps, it does not mean that those living in these areas are being accused. Rather, the residents of Arsal and Palestinian factions in the camps must cooperate more effectively with the Lebanese security services to prevent terrorists from exploiting these vulnerabilities to spread strife between Sunnis and Shiites and between Palestinians and Lebanese.

The source concluded by saying that these preventative security measures and the tracking down of terrorists are not sufficient to stop or minimize terrorist bombings. He noted that there is a need to form a comprehensive national consensus government, which includes all political components in Lebanon. This will grant the Lebanese army a broad cover to take action against these groups in their dens, instead of waiting for a blast and then classifying the attack, determining the make and model of the vehicle, the name of the car’s true owner and the identity of the suicide bombers when possible. According to the source, after the latter steps are carried out it is already too late.

On Jan. 25, Abu Sayyaf al-Ansari, a sheikh from the city of Tripoli in north Lebanon, released a voice recording in which he pledged his allegiance to Abu Bakr al-Baghdadi, the emir of ISIS. In the recording, Ansari specified ISIS' goals in Lebanon, which involve fighting against Hezbollah and the Lebanese army, describing the latter as "the crusaders' army." This recording, the statements released by the Abdullah Azzam Brigades and ISIS claiming responsibility for bombings in the southern suburbs and Haret Hreik, and the threat made by Jabhat al-Nusra in Lebanon, all are signs confirming the presence of al-Qaeda in Lebanon, in various branches and under different names. This goes against the attempts of some politicians and clerics to deny this. The latter consider such claims fabrications carried out by the intelligence services to undermine some Lebanese Sunni “mujahedeen” who are providing social services to Syrian refugees, or perhaps even supporting the revolution and fighting against the Assad regime, according to these politicians and clerics.