A security source said that Thursday’s explosion in Beirut may have been prepared in a hurry and may be linked to the attack on a Lebanese army checkpoint in Sidon on Dec. 15, 2013. 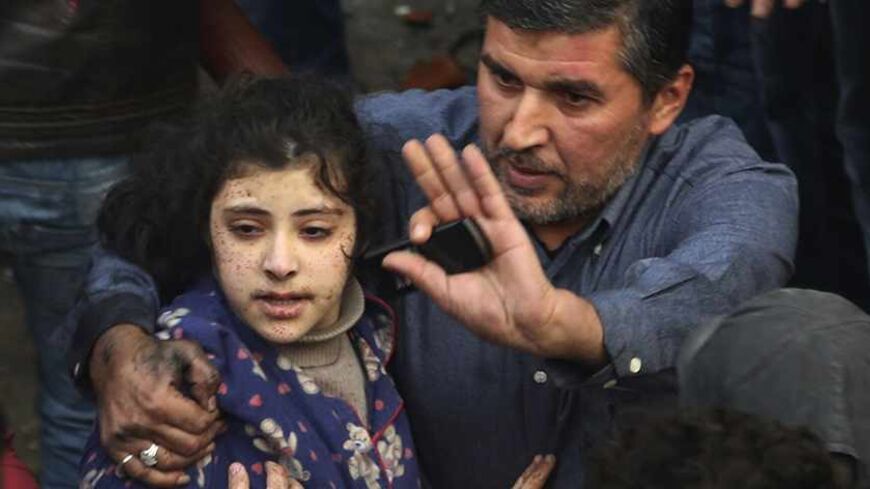 A man gestures as he holds a wounded girl at the site of an explosion in Beirut's southern suburbs, Jan. 2, 2014. - REUTERS/Issam Kobeisi

The source, who preferred to remain anonymous, explained that the reasons for this belief were as follows: First, the attack came about five days after Majid’s arrest and less than 48 hours after Saudi and US sources confirmed his arrest. Second, the explosion was likely caused by a relatively small bomb, not by a large car bomb. Third, the explosion happened on the edge of the southern suburbs, not in its heart, and at 400 meters (437 yards) from the Palestinian refugee camp of Burj el-Barajneh, which is adjacent to the capital, Beirut, and to the densely populated Shiite area targeted by the blast.

Those three factors, according to the security source, indicate that the party behind the explosion prepared the bomb quickly and that the car was booby-trapped in a hurry. There was not enough time for a large bomb to be prepared. More importantly, the urgency to commit the crime forced the car to be parked close to the place where it was likely prepared. That links the arrest of the Saudi terrorist, who hid for a while in the Ain al-Hilweh camp in southern Lebanon, with jihadist groups hiding in some Palestinian refugee camps in Lebanon, and with the fact that the explosion happened near one of these camps.

All these indicators suggest that Thursday’s explosion was a response by these groups to the arrest of the commander — or, in the language of terrorist groups, the emir — of the al-Qaeda-affiliated Abdullah Azzam Brigades, Majid, who is in a Beirut hospital.

The source revealed to Al-Monitor that preliminary information indicates that army intelligence was able to obtain accurate information about Majid’s movements (he is also known as "Abu Qatada, the Palestinian") after the suicide bombing that targeted a Lebanese army checkpoint at the entrance of Sidon on Dec. 15.

By pursuing some of those involved in the checkpoint attack, the army was able to arrest some jihadists who became an important source of information for army intelligence, which was then able to track Majid’s movements. Those efforts culminated in revealing the forged identity that Majid used to get treatment in a Beirut hospital for kidney failure. He was apparently arrested around a week and a half after the attack in Sidon.

But who was behind Thursday’s explosion, which came as a possible response to the arrest of that internationally wanted terrorist? The source told Al-Monitor that the message seems to be intended for more than one party: First, to Hezbollah, especially after unconfirmed information indicated that military intelligence had received information from a “friendly source” that contributed to the arrest of the Saudi terrorist. That explains why the explosion happened in a Shiite area. Second, to Iran, which, as soon as Majid was arrested, announced that it was interested in Majid’s arrest because of his organization’s involvement in the terrorist suicide bombing against Tehran’s embassy in Beirut on Nov. 19. It should be noted that several official Iranian statements stated that Tehran was directly interested in investigating Majid. Third, to the Lebanese government, because Majid’s terrorist organization has a long record of violent acts against Lebanon’s people and government. Fourth, to Washington, which is leading the global war on terror and knows more than others the danger posed by the al-Qaeda-affiliated Abdullah Azzam Brigades. Fifth, to Saudi Arabia, which apparently quickly requested that Majid be extradited to the kingdom, perhaps because he may be a “black box” containing serious information.

The man may have a treasure trove of secrets on terrorist financing and the movements of terrorists and their weapons in the region and the world. Some may not want that information to be revealed.

So who will open the alleged Saudi terrorist’s box of secrets? That question is worrisome to many. And that may explain why a message may have been sent that that box should not be opened — a message in the form of Thursday’s bombing in Beirut.