Majid bin Mohammad al-Majid, the emir of the Abdullah Azzam Brigades in the Levant, was arrested by the Lebanese army, and he is hospitalized. 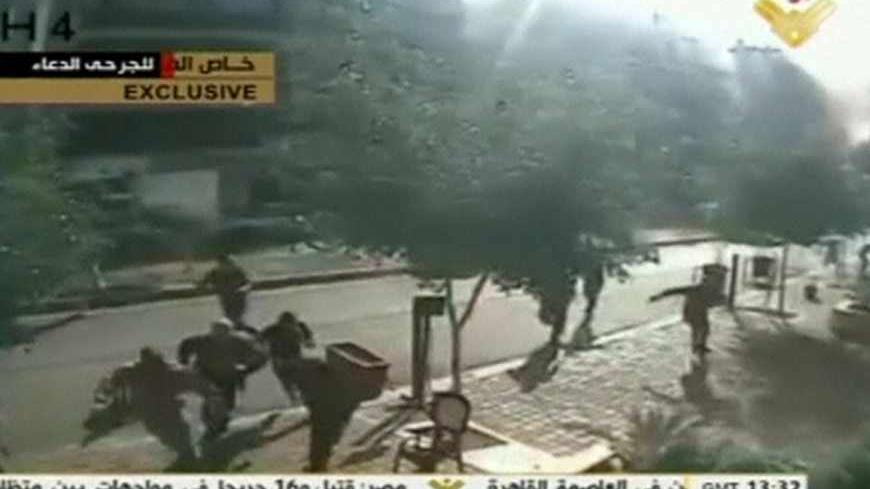 People run after the second blast rocked the Iranian Embassy compound in Beirut in this still image taken from a security camera near the embassy, Nov. 19, 2013. - REUTERS/Al Manar via Reuters TV

Majid bin Mohammad al-Majid, the emir of the Abdullah Azzam Brigades in the Levant, was undergoing kidney treatment at the Almakased hospital in Beirut, when he suddenly found himself face to face with the Lebanese army. A security source told Al-Monitor that the al-Qaeda-affiliated emir was arrested after Lebanese military intelligence received information that he was about to leave for an unknown destination.

“The decision was taken and the army arrested Majid without shooting a bullet,” said the security source, who spoke on condition of anonymity. He added, “The army knew that Majid left his hiding place in Sidon, 40 kilometers [25 miles] south of Beirut, on the evening of the attacks on the army two weeks ago [Dec. 15].” The source was citing the Sidon attacks — which left four attackers and one Lebanese soldier killed after a triple attack on checkpoints around the city — that Al-Monitor reported on in detail.

The Abdullah Azzam Brigades is on the US State Department's terror list — though Majid's name is not — and Majid is among the 85 most wanted terrorists in Saudi Arabia. He was appointed successor to Saleh al-Qarawi, who was arrested on June 9, 2012, after returning to Saudi Arabia from Pakistan, where he was reportedly wounded in a drone strike.

Shortly after being appointed, Majid posted an audio message addressing Lebanese Shiites in general and Hezbollah and the Amal movement in particular. Later, Majid was said to have moved to Syria, but sources in the Palestinian Ain al-Hilweh refugee camp in Lebanon — where he used to live — denied these claims, insisting that the only time Majid moved from the camp was in mid-December. The sources suggest that few candidates are available to replace him, including Tawfik Taha and Fatah al-Islam leader Osama Alshihabi, whose name was added to the US State Department's terror list on Dec. 18. Some expected the group might undergo changes that fit the new situation in the region. This might involve merging the group with one of the main al-Qaeda-affiliated factions in Syria under one leadership, while the Abdullah Azzam Brigades will continue to play the same role it currently plays but in a way that the head branch in Syria can build on in their fight with Hezbollah in particular.

For years, the Abdullah Azzam Brigades was known for launching Katyusha rockets on Israel and attacking the United Nations Interim Force in Lebanon (UNIFIL). On Nov. 19, the group claimed responsibility for the suicide attacks on the Iranian Embassy in Beirut, which killed more than 20. Since then, Lebanese security forces have focused on the group, especially since there are concerns they might launch further attacks.

The news of Majid's arrest came only a few days after Lebanese President Michel Suleiman announced on Dec. 29 that Saudi Arabia is donating $3 billion to the Lebanese army to purchase arms from France, making it the largest donation to the army ever. This raised questions in Beirut of whether Lebanon will hand Majid to Saudi Arabia, which was accused by Hezbollah Secretary-General Hassan Nasrallah in a Dec. 3 TV interview of being responsible for the attack on the Iranian Embassy. However, the group said in its statement of responsibility that the attack was prompted by the involvement of Iran and Hezbollah in the Syrian crisis.

What is obvious is that Majid's arrest will unveil the real role the Abdullah Azzam Brigades played for years, and whether they were part of the global jihad or serving a regional agenda that was aimed at shaking Lebanon's fragile security.