What next after death of al-Qaeda leader in Lebanon? 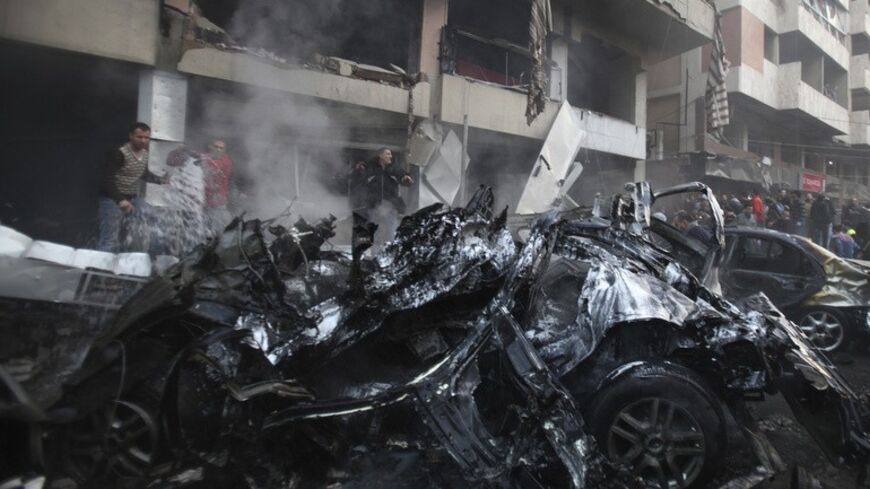 People attempt to extinguish a fire at the site of an explosion in Beirut's southern suburbs, Jan. 2, 2014. - REUTERS/Khalil Hassan

TEHRAN — A few days after his arrest, the chief of Lebanon's al-Qaeda branch was pronounced dead by the authorities. “His health condition deteriorated,” said a military source in Beirut, explaining that Majid al-Majid suffered from kidney failure. “He was treated at the hospital before his arrest, and later, after falling in the hands of the army, he was given appropriate care. But God’s will is above all wills.”

According to another source — an officer close to the investigation process — Majid wasn’t interrogated. “His health condition didn’t give the investigators the chance to ask him. He was in a dire situation, and the priority was to save his life,” said the source. Majid died early Saturday, Jan. 4, and what was believed to be a fortune of information and secrets was transformed into a sort of mirage. Many were awaiting his confessions, hoping that he would solve many of Lebanon's bloody riddles.

While details of Majid’s arrest were discussed in a previous piece by the author, the details of his death have been kept secret. Most Lebanese, despite their political differences, are treating the news with skepticism. Some believe that Majid — the man who heads the Lebanese branch of the most dangerous group in the world — was killed so that his secrets, which could harm many people, died with him. This is the point of view on the street and on social media sites like Facebook and Twitter, which have been used to convey a unified message that they don’t buy the news, and that the Lebanese government is responsible for his life and death.

Before Majid’s death, several countries expressed interest in interrogating him, including Iran. One security source said the United States also sent a request. Saudi Arabia called upon the Lebanese authorities to hand him over, as he was one of the kingdom's 85 most wanted men.

An Iranian source told Al-Monitor that the death of Majid under such circumstances is surprising and shocking. “Iran is studying the situation carefully. The man was the leader of the terror group that bombed the Iranian embassy in Beirut. Iran wants to know who’s behind him. There’s something unclear happening,” said the source. On Nov. 19, 2013, two suicide bombers attacked the Iranian Embassy in Beirut, killing 23 people, including an Iranian diplomat. Hezbollah accused Saudi Arabia of being behind the attack, while Iran blamed Israel. Later, the Abdullah Azzam Brigades took responsibility for the attack, saying it was in response to Hezbollah’s and Iran’s meddling in Syria.

The Abdullah Azzam Brigades’ attack on the Iranian embassy was the group's first attack on a government or civilian target in Beirut. For years, the brigades attacked both United Nations forces and Israeli settlements, as well as a few scattered attacks outside Lebanon. The US State Department labeled the brigades a terrorist group, and some of its leaders were on the terror list, except for Majid, who is thought to have assumed power in June 2009.

As the emir of the Abdullah Azzam Brigades in Lebanon, Majid knew everything about the group’s activities, including funding, financial transactions, arms-smuggling routes into Lebanon, sleeper cells and links to al-Qaeda-affiliated groups fighting in Syria. Moreover, his prominent role meant uncovering the truth about many security breaches that left Lebanon's two main political coalitions, March 8 and March 14, stuck in a war of words.

What now, after Majid’s death? The answer to the question was heard on Jan. 2, 2014, when a car bomb ripped through the heart of Beirut's southern suburbs — Hezbollah’s stronghold — killing at least five people and wounding 75. The Islamic State of Iraq and al-Sham (ISIS) claimed responsibility for the attack, according to SITE Intel. The attack hints that the decision to turn Lebanon into a land of jihad won’t be affected by the arrest or death of anyone, and that the Abdullah Azzam Brigades might soon merge with ISIS and become their branch in Lebanon. But a Lebanese security source told Al-Monitor there are indications that the Abdullah Azzam Brigades and Lebanese Sunni cleric Ahmad al-Assir might join forces: “One of the two suicide bombers at the Iranian embassy was an Assir supporter. The other four who were killed in Sidon during the attacks on the Lebanese army were also Assir supporters. It seems a Lebanese al-Qaeda-affiliated group is on the way.”