'We should have died'

An exclusive report from the scene of yesterday's bombing in Beirut. 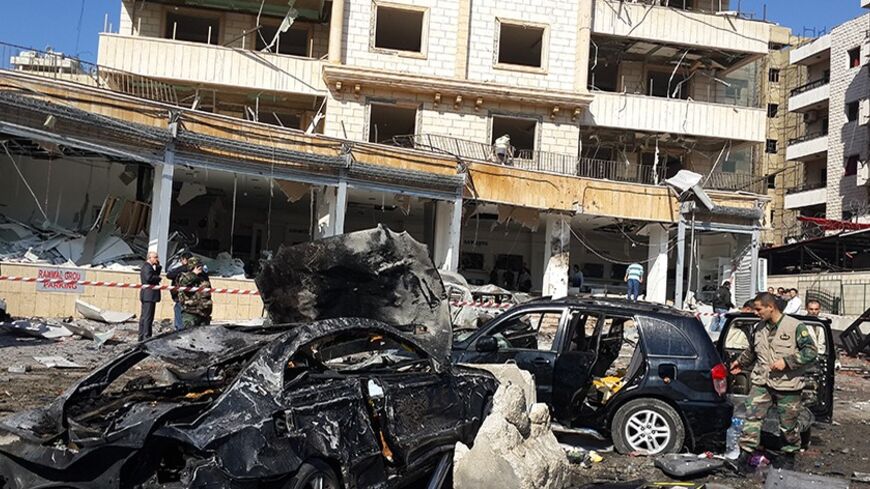 BEIRUT — Nothing but death all around the place. Chunks of human flesh can be seen everywhere — a hand, a leg, half a body. Dozens of people are wounded, some covered with blood and shaking in shock after the twin suicide bombing that struck the entrance of the Iranian Cultural Center in southern Beirut on Feb. 19, killing at least five, along with the two suicide bombers.

"We should have died, my wife and myself. We should have died," said an eyewitness who was only a few meters from where the suicide bomber detonated himself. "I saw him getting beneath the building's gate. He was trying to get in with his car. Suddenly, everything was black. I couldn't see anything. Another three seconds and another explosion took place. I don't remember anything else."

A security source in Beirut told Al-Monitor that the plan was similar to that of the Nov. 19, 2013 twin attack on the Iranian embassy in Beirut. "The first attacker was to open a hole in the security measures near the Iranian Cultural Center, while the second suicide bomber was to drive into the building and detonate the car," said the source. The other car can be seen some 50 meters away from where it should have exploded; it didn't arrive. The source believes a technical problem led to the early detonation of the car. "This rid the area of a real massacre," he said.

The second car exploded in front of an orphanage during the children's lunch time, leaving dozens of them injured and all of them traumatized. Families and teachers rushed the children to ambulances and safer areas, while rooms and halls of the Dar al-Aytam al-Islamiyah orphanage were direly affected by the explosion.

The security source revealed to Al-Monitor that both suicide bombers were followers of Sheikh Ahmad al-Assir. "They are members of the same cell that attacked the Iranian embassy three months ago. All these young men are followers of Assir. This proves that Assir and the Abdullah Azzam Brigades, which claimed responsibility for the attack, are working hand in hand, and it's very possible that Assir himself became one of the brigades' main commanders."

The Abdullah Azzam Brigades posted a video claiming responsibility for the attacks and vowing to continue attacking Iranian and Hezbollah interests until the latter withdraws from Syria, and the Lebanese government releases Islamist prisoners.

The bomb came just three days after the formation of the new Lebanese cabinet, wherein the interior and justice minister positions were given to the Future Movement. Speaking to journalists near the blast scene, Nouhad Machnouk, Lebanon's new interior minister, said he will take stringent measures along Lebanon’s porous border with Syria to protect against the infiltration of car bombs, adding that stolen cars from Lebanon are being rigged in Syria and then sent back to Lebanon.

Machnouk urged Lebanese political officials to cooperate with security forces to end what he called the “the dens of death” in the Bekaa Valley.