The Nov. 12 suicide bombing in Beirut failed to sow discord among Lebanese political parties and actually seemed to bring them closer temporarily, but their disagreements run too deep to allow for sustained cooperation. 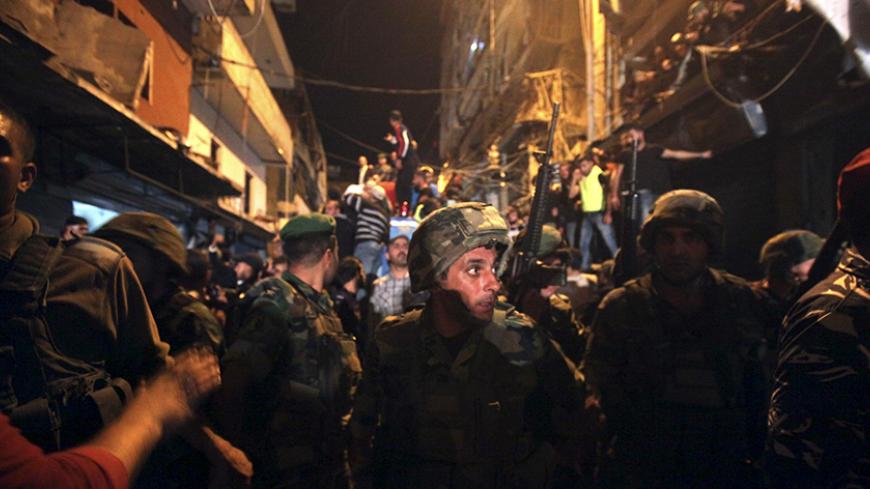 As the world was learning of the deadly terrorist attack Nov. 12 in Beirut, it was stunned by another attack the next day in Paris. The Nov. 12 explosions in Lebanon claimed dozens of lives. The following day, the bloody Paris events made the headlines.

Though the suburban Beirut explosions in Burj al-Barajneh lost the media spotlight to the Paris shootings — as well as to field developments in Syria and reactions to Turkey's downing of a Russian plane — the attacks in Lebanon were significant.

As the state security systems that were put in place by Lebanese Prime Minister Tammam Salam’s government in February 2014 are weakening, political divisions are deepening and constitutional institutions remain in a state of paralysis.

Following the Burj al-Barajneh explosions, Hezbollah immediately called for appeasement, while security authorities were able to arrest the perpetrators in record time, dismantle their networks and thwart terrorist operations that were being planned.

Could this successful cooperation be enough to ensure the stability of the small country and protect it from the wave of terrorism that has once again emerged?

On July 9, 2013, a huge explosion shook the Bir al-Abed district. A second bombing took place in Ruwais less than 40 days later, on Aug. 15, 2013. Both areas are located in the southern suburbs of Beirut.

As if to target Hezbollah and its supporting countries again, namely Iran, another wave of bombings swept across this region. The Iranian embassy in the Bir Hassan area in the Jnah district was targeted Nov. 19, 2013, by a suicide bombing, and al-Qaeda’s Abdullah Azzam Brigades claimed responsibility for the attack.

That attack was followed by two more bombings. The first targeted the Haret Hreik district on Jan. 2, 2014, while the second took place near the Shatila roundabout on June 23, 2014. Groups linked to the Syrian revolution claimed responsibility for these terrorist operations in response to Hezbollah’s intervention in the Syrian war and its support for Bashar al-Assad’s regime.

This all shows that the Burj al-Barajneh bombing was part of a series of terrorist operations. That series had been largely curtailed when Salam reached a settlement between the March 14 and March 8 political parties to put an end to a government vacuum that had lasted 10 months and nine days.

The most important thing about the settlement is that moderate Sunni figures filled security positions, namely the Ministries of Interior (Nouhad Machnouk) and Justice (Ashraf Rifi). Back then, in February 2014, Lebanese parties including Hezbollah felt that openness toward moderate Sunnis was the most appropriate option to ease the sectarian conflict being exploited by extremist organizations.

Meanwhile, a bilateral dialogue between Hezbollah and the Future Movement took place December 2014 under the auspices of Parliament Speaker Nabih Berri, as the two parties were concerned over the creeping extremist terrorism. Apart from this fear, however, the two parties found many issues to disagree on, and the issues were not limited to Hezbollah's weapons and its involvement in the Syrian war. Their deep disagreements brought dialogue to a halt, and government action was disrupted as the dispute between Saudi Arabia and Iran — the main regional sponsors of the Future Movement and Hezbollah, respectively — escalated in the Syrian and Yemeni arenas.

However, with the most recent calamity to plague Burj el-Barajneh and strike pain in the hearts of the Lebanese people, the appeasement discourse resurfaced. It showed that Lebanon’s security forces enjoy a high degree of readiness and a great level of coordination.

Interestingly, two days after this latest explosion, Hezbollah Secretary-General Sayyed Hassan Nasrallah made a televised speech in which he praised the work of the security forces, and the information branch particularly, “for its intense efforts and professional work.” This branch had recently faced a wave of criticism and suspicion from Hezbollah, its allies and their supporting media outlets for its affiliation with the Future Movement.

But two days after the blast, the information branch dismantled the network of the Burj el-Barajneh suicide bombers and carried out raids in Tripoli’s Qubbah ​​district. On Nov. 17, the branch also foiled terrorist plans that were underway. By Nov. 25, military judge Saqr Saqr charged 26 people with belonging to the Islamic State and being involved in the bombing.

With his speech, Nasrallah did not escalate tensions with the March 14 team or Saudi Arabia, as he had done in a previous speech. He even warned against division and said that the aim behind the bombing was to “sow strife in Lebanon."

Remarkably, he also called for all parties “to take advantage of the positive climate, solidarity and togetherness prevailing in Lebanon."

"This climate should be preserved and built upon,” he said, reiterating his call for “a comprehensive political settlement on various levels within the existing frameworks and based on the Taif agreement.” That agreement was completed in 1989 under the auspices of Saudi Arabia.

The Future Movement might agree with this outlook, in part. Antoine Andraos, deputy head of the Future Movement, said in an interview with Al-Monitor that the goal behind this bombing was to “sow discord between the Lebanese and start a conflict between Sunnis and Shiites.”

“Who is behind these bombings? Who is seeking sedition?” Andraos asked.

The answer to those questions remains in the hands of the judiciary. But it is important to note that the Burj el-Barajneh attack failed to incite the Lebanese parties to exchange charges or launch accusations against Arab countries for supporting the Syrian opposition — namely, the extremist groups responsible for the previous attacks in Beirut’s southern suburb. On the contrary, the attack resulted in a call for a political settlement.

However, the question arises as to whether this common feeling of danger by itself can lead to a settlement that restores constitutional life and ends the presidential vacuum.

No such settlement is in sight. The disagreement is so deep that it leaves no room for any reconciliation. Meanwhile, the Lebanese parties continue to serve as an extension for regional forces battling in the Levant, and those observing the complexities of the Syrian scene know full well that no breakthrough is on the horizon.