Will Beirut bombing spur Lebanon into finding a new president?

The attacks in Beirut have opened a window for consensus, and it is likely that presidential hopefuls Michel Aoun and Samir Geagea will stand aside to make room for a third, less divisive candidate. 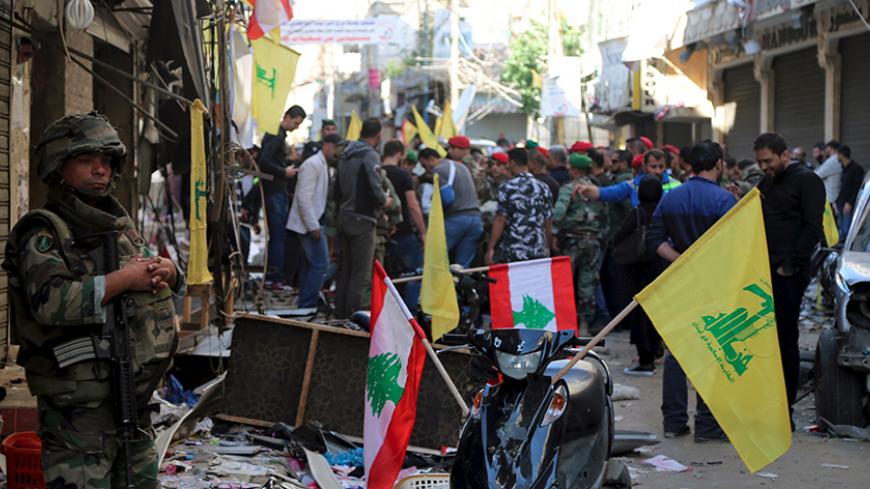 A Lebanese soldier secures the area as Lebanese and Hezbollah flags are erected at the site of the two explosions in a southern suburb of the Lebanese capital, Beirut, Nov. 13, 2015. - REUTERS/Aziz Taher

The last day Lebanon had a president was May 24, 2014. For a year and half, the country known for its sectarian-driven politics has gone not only without a president, but with a resigned, caretaker government, and a parliament that has twice extended its own term. The first time they did so was in May 2013, when the elections were postponed from June to November 2014. Lebanon’s parliament members voted again on Nov. 5, 2014, in favor of extending their mandate for another two years.

Several challenges tripped up the country’s ruling elite and left it unable to make decisions. Even when dozens of military and internal security personnel were abducted by al-Qaeda-affiliated Jabhat al-Nusra and the Islamic State (IS), no firm action was taken, nor was there when garbage flooded the streets.

It was only when thousands of Lebanese took to the streets over the garbage crisis under the umbrella “You Stink” that there was a move toward consensus on a way to calm the protests.

This and other activist groups gained momentum in the Lebanese street and gained influence among the youth. It was the first time that a nonpolitical movement was able to unite thousands of Lebanese from different sects and political affiliations. It didn’t take long for the protests to take a violent turn, and several activists were arrested. In response, the protesters changed direction and called for political reform and a new electoral law.

The war in Syria, the regional strife between Iran and Saudi Arabia, and the internal differences over the presidential elections, the next government and the electoral law combined to fuel the agitation in Lebanon after it became clear that despite the ongoing dialogue between Iranian-backed Hezbollah and Saudi-affiliated Future Movement, there was nothing positive on the horizon. The more Hezbollah verbally attacks Saudi Arabia, the more the Future Movement and Iran attack each other and the further Iranian-Saudi relations deteriorate, the closer Lebanon drew to the edge of the abyss.

Hezbollah’s Secretary-General Hassan Nasrallah spoke on Nov. 11, calling for a “comprehensive political settlement” on the presidential elections, the new government and the electoral law.

Then came the Nov. 12 twin suicide bombings in Beirut’s Shiite-dominated southern suburb of Burj el-Barajneh that killed 43 people and injured more than 200.

At that moment, the sounds of the explosions and the grieving voices of the families seemed to overtake the noise of politics. The country was in shock, and so seemed to be the political factions. Statements of condemnation filled the air while the funerals were held. Some positive messages came from mediators who, according to a high-profile Lebanese politician who spoke to Al-Monitor on condition of anonymity, “agreed on calming down the tension to rid the country of additional chaos that might give IS and its likes a fertile environment to grow in.”

Lebanese political rivals started a new national dialogue amid the garbage crisis to try to solve these issues, including the long disputed electoral law that has been a matter of debate and discussion since the end of the Lebanese civil war. After the assassination of former Lebanese Prime Minister Rafik Hariri in 2005, there were calls to introduce a new electoral law to replace the 1960 law, according to which the last election in 2009 was conducted. The differences are mainly over whether the election should happen in a proportional representation or a winner-take-all system.

On Nov. 14, two days after the explosion, Nasrallah gave another speech. Condemning the attacks in Beirut and Paris, he hailed the efforts of the Lebanese security forces, mainly the Information Branch, which is known for being very close to the Future Movement. Nasrallah praised “the achievement of the security forces, especially the Information Branch, in following up closely with the resistance security, in an extensive and professional manner.” He added, “For the upcoming days, we must continue to work closely together, as we have done previously in the face of car bombings,” concluding, “The international community is busy and we are able to face our problems and find solutions if there is a will and seriousness.”

The ISF’s Information Branch succeeded in dismantling the network behind the Nov. 12 bombing, according to Lebanese Interior Minister Nouhad Machnouk, who said, “There are seven Syrians who have been arrested, aside from the two suicide bombers. There are two Lebanese who have been detained, one of them a [would-be] suicide bomber and the other a trafficker who smuggled them across the border from Syria.”

Machnouk, who is also a parliament member representing the Future Movement, added, “It is clear that there is a major decision to destabilize Lebanon.” He called on politicians to come together and look for solutions to the presidential vacuum, noting, “Lebanon is not on the international map, but Yemen and Syria are. We must realize this fact and act accordingly.”

Reading into both Nasrallah and Machnouk’s stances, it is clear that the two sides have already reached some common ground. In the meantime, however, no one is running Lebanon.

Now that there is a chance for a consensus, it is very likely that Aoun and Geagea will stand aside and a new candidate will step in, for either's victory would mean a win for one side over the other, and this won’t work for a settlement. Besides, Hezbollah and the March 8 Coalition won’t accept Geagea as president, given his stance on Hezbollah's presence on both the Israeli and the Syrian fronts.

On the other side, the Future Movement and March 14 Coalition wouldn’t be happy with Aoun as a president, for that would make Aoun the main Christian leader in the country and give March 8 a chance at a double share in any future government.

Many Lebanese see a consensus candidate as a miracle worker able to put the country back on the right track, despite the limited powers of the Lebanese presidency. The Lebanese president is the guarantor of the application of the constitution and the commander-in-chief of the armed forces. Yet he can’t choose a prime minister without consulting with the parliament speaker and other members, nor accept the resignation of ministers without the consent of the prime minister.

Still, his presence is important for the government's workings, as he is the one who signs decrees and transfers them from the Cabinet to the parliament, not to mention the symbol of the country’s unity.