The Dec. 4 assassination of a leading Hezbollah figure in Beirut occurred when the organization was in a state of heightened vigilance. 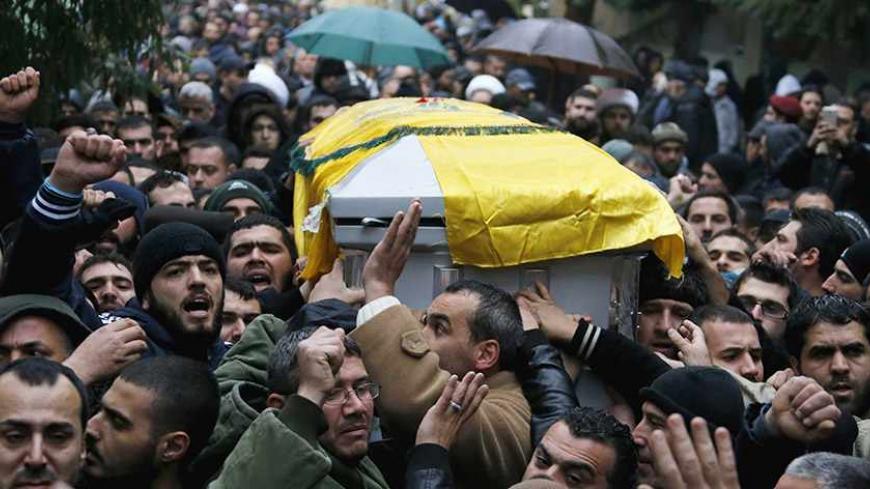 A correspondent in Beirut
December 5, 2013

BEIRUT — Two separate and unknown factions claiming to be affiliated with jihadist movements issued statements claiming responsibility for the assassination of Hassan al-Laqis, a leader in Hezbollah’s Islamic resistance, barely 24 hours after gunmen attacked him around midnight on Dec. 4 in Beirut’s southern suburb. The factions, as they called themselves on Twitter, are the Brigade of Free Sunnis in Baalbek and the Brigade of Islamic Nation Partisans. Both identities are viewed with a measure of suspicion in Beirut. At first glance, the Brigade of Free Sunnis in Baalbek appears to have wanted to spark a sectarian clash between Sunnis and Shiites in Baalbek, which is home to adherents from both communities, reminiscent of the violence that erupted last summer between Hezbollah supporters and one of the city’s Sunni families.

For its part, Hezbollah quickly blamed Israel, which uncharacteristically issued a statement a few hours later through its Foreign Ministry denying any involvement in the killing. Such a denial is precedent-setting in Israel’s handling of these types of events. Israeli governments have typically maintained their silence, neither confirming nor denying involvement in such operations. Its response to Laqis' assassination has raised speculation in Beirut about the reasons that might be behind Israel forsaking its traditional approach. Some sources suggested to Al-Monitor that Israel wanted responsibility for the ongoing security-related incidents that have plagued Lebanon in recent months to remain firmly focused on Hezbollah and its Sunni Islamist antagonists, whom the party suspects are receiving support from Saudi intelligence and its chief, Bandar bin Sultan.

Laqis’ assassination is the latest security incident following a series of bombings across Lebanon, apparently in conjunction with the escalating political conflict that has been raging between Hezbollah, Salafist Islamist movements and Saudi Arabia involving their respective positions vis-à-vis the Syrian crisis. Two weeks ago, on Nov. 19, two suicide bombers from the al-Qaeda-affiliated Abdullah Azzam Brigades targeted targeted the Iranian Embassy in Beirut. The attack was preceded by two car bombings in July and August in Hezbollah’s stronghold in Beirut’s southern suburb and speculation that they are part of ongoing retaliatory responses against Hezbollah’s involvement in the Syrian war alongside the Syrian regime.

Despite the fact that Laqis’ assassination came at a peak of tensions and anxiety surrounding additional terrorist bombings rocking Lebanon, the method used was a departure from previous attacks, which had mimicked the mode of operations prevailing in Iraq, that is, explosives-laden cars (as was the case in Tripoli on Aug. 23 and the southern suburbs) and suicide bombers (as used against the Iranian Embassy). In contrast, the Laqis hit was reminiscent of past assassinations carried out by Israeli special forces units against leaders of the Palestinian resistance movement during their presence in Lebanon in the 1970s and 1980s.

Security services are also unsure about the identity of the perpetrators. While the incident is thought to be attributable to the confrontation between Sunni Islamists and Hezbollah over Syria, its implementation is completely different from the methods by which jihadist Islamists operate. This opens the door for speculation that a third party might have entered the fray to stoke the flames of the confrontation raging between Hezbollah and Islamist Salafist movements, thus raising its intensity and diversifying the conflict.

Regardless of the perpetrators’ identity, Laqis’ assassination represents an unprecedented security breach in Hezbollah’s security. The operation necessitated a great deal of audacity and was executed by a commando unit that successfully carried out its mission before quietly retreating from an area considered an impregnable security stronghold for Hezbollah. Its timing was also suggestive, as it did not occur at a time when Hezbollah had its guard down, but at a time of extraordinary vigilance.

The most important question in the aftermath of this operation is whether a crack has begun to appear in Hezbollah’s defensive security fortress as a result of the attrition it is suffering in the Syrian war.