Nasrallah, Assad ties stronger than ever

Hassan Nasrallah's defense of Hezbollah’s role in the Syrian conflict sheds light on the nature of his relationship with Syrian President Bashar al-Assad’s regime. 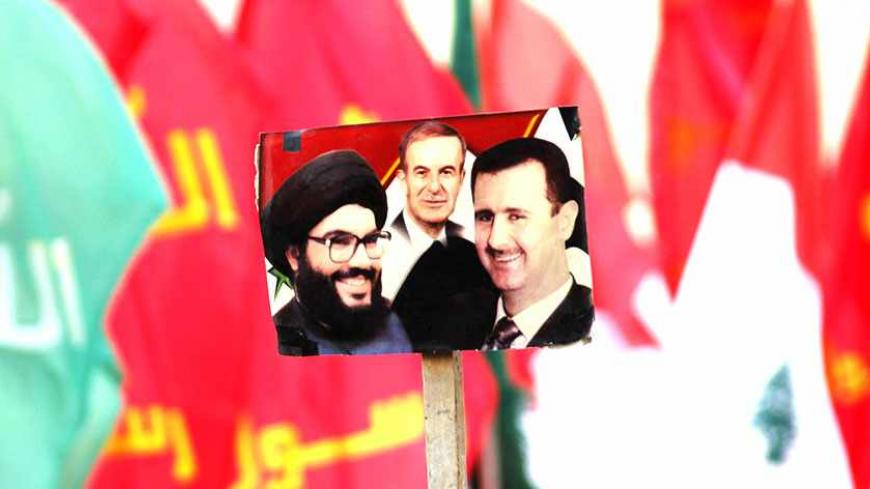 While Hezbollah Secretary-General Hassan Nasrallah was taking part in a televised interview on Dec. 3, a special security unit was carrying out the assassination of Hassan Laqis, one of the most prominent leaders in the Party of God. The timing suggests that the perpetrators wanted to refute the message Nasrallah intended to deliver during his interview; in particular, his assertions that the party's militants are fighting in Syria and on its border with Lebanon to prevent extremists from pouring into Lebanon. Many have also suggested that the perpetrators purposely timed the operation to coincide with Nasrallah's television appearance to leave no doubt about the link between the two events.

During the interview, Nasrallah stressed that his party is engaged in a pre-emptive war in Syria to prevent Lebanon from turning into another Iraq. He said that the porous border between Syria and Iraq was allowing extremists to move back and forth between the two countries, leading to a terrifying increase in car bomb attacks in Iraq. He added that Hezbollah fighters had prevented extremists from controlling Lebanon's border areas, thus protecting the country from the carnage Iraqis are experiencing.

Political assessments of Laqis’ assassination suggest that Nasrallah's talk of a pre-emptive war to prevent radical Islamist groups from getting into Lebanon is untrue and unfounded. The assassination of Laqis is proof in itself that Hezbollah has failed to protect Lebanon by engaging in the Syrian war. The party could not even protect one of its most prominent leaders, who was gunned down in the heart of Hezbollah’s stronghold in Beirut's southern suburbs.

In light of the connection made between Nasrallah's speech and Laqis' death, one could argue that the core of the dispute lies in Nasrallah's assertions that he is waging a defensive war in Syria, while his opponents contend that he is involved in an immoral war whose only goal is to protect the Syrian regime of President Bashar al-Assad. Thus, more violent attacks by radical Islamist groups should be expected against Hezbollah targets in Lebanon as long as the party continues its involvement in the Syrian war.

On the other hand, however, one should heed another significant detail. In his interview, Nasrallah acknowledged that the party's intervention in the war had been a "gradual involvement," given Hezbollah's geographical proximity and numbers. This suggests an acknowledgment that the party was somehow "dragged" into the conflict. Regardless, Nasrallah remains convinced that the decision to fight was the right one for two reasons.

First, the conflict allowed Hezbollah to confront its "extremist enemies" at the time and place of its choosing. Second, the war against extremists serves as a cover for the party to protect the Assad government, as Nasrallah is well-aware that the survival of the regime will allow his organization to continue breathing at a strategic level. If the regime were to fall, Hezbollah would be geographically and politically isolated.

In this context, when analyzing Nasrallah's position, one should consider that Assad has forged a strong relationship of trust with him, unlike Nasrallah's relations with Assad's father, the late Syrian President Hafez al-Assad. It was apparent to all that Assad senior had steady and astute strategic and political senses. The way he dealt with matters, even those things closest to his heart, did not involve emotion or sentiment. He always put Syria at center stage. Decisions made in Damascus had to take into consideration the best interests of the state, playing the cards necessary to uphold the political status of the capital, regionally and internationally.

Although it is true that Hafez al-Assad provided significant support to Hezbollah, it is also the case that he viewed the party through the lens of a relationship between a dominant state and an allied affiliate. The son does not have the same view of the party as his father, especially in regard to his relationship with Nasrallah. Several things indicate this.

First and foremost, Assad broke with his father's tradition of not meeting with Nasrallah, whether in public or behind closed doors. Hafez preserved this tradition because he assessed that any meeting with Nasrallah would allow the West to confirm its assumptions about Syria's close relations with the Islamic resistance. In war and in peace, Hafez wanted to maintain the image of Syria as only supporting the resistance in its significant role in the conflict with Israel.

In 2006 during the Second Lebanon War (between Hezbollah-Israel), Assad provided Hezbollah with anti-tank missiles, which changed the equation on the ground. It is highly unlikely that Hafez would have taken such a step, because he was keen not to cross certain red lines in his relations with the West.

The bottom line is that Nasrallah seems to see the current Syrian president as God's gift to the resistance. For Assad, a man young in age and political experience, Nasrallah's victories against Israel between 2000 and 2006 appeal to his youthful pride.

Today, with the Syrian crisis and Nasrallah's blind support of the regime, the relationship between Assad and Nasrallah has become much closer and stronger on a human and political level. Both have tested the loyalty of the other. Indeed, Assad crossed international red lines and provided Nasrallah with game-changing weapons in 2006, while the Hezbollah leader has dispatched fighters to support Assad's regime in its time of war.