Iraq's children are the victims of widespread poverty, political dysfunction and sectarian violence. 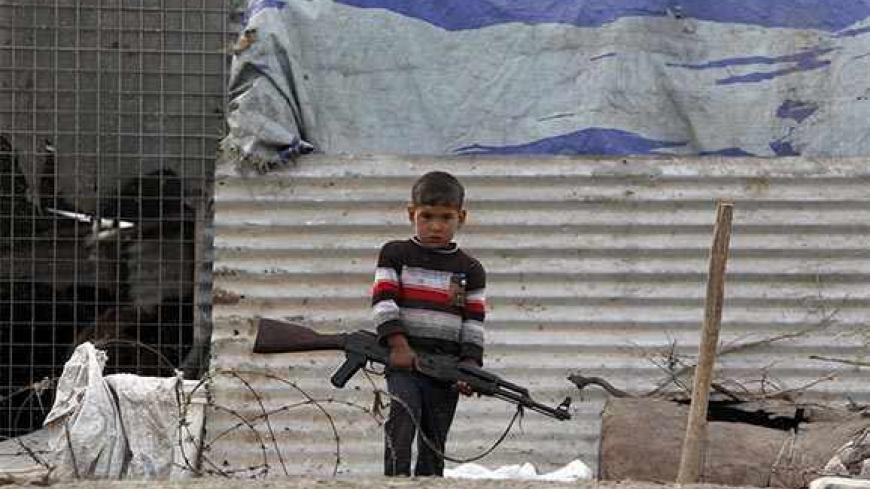 “He asks about his mother and his father and says that he wants to go to school. He still has not learned that his parents are gone, which would inevitably cause him an unhealable open wound.” This is how a grandfather described the situation of his grandson who is in the hospital after having lost his immediate family except for his younger sister in one of the blasts that rocked Baghdad in October 2013.

After more than 10 years of continuous terrorism in Iraq, it is nearly impossible to count the number of children with a similar story. A search on YouTube reveals hundreds of videos of children who have lost their loved ones, screaming in pain and crying out in bitterness as a result of the misery they are living in a country where childhood is desecrated. Terrorist groups in Iraq have not excluded children, as numerous attacks have targeted places where children are likely to be present. This was the case in the attack that targeted an elementary school in one of the villages in northwestern Iraq on Oct. 6. This attack claimed the lives of more than a dozen children, while 44 were injured by the blast caused by two car bombs.

Child victims are not restricted to those killed in bombings or those who have lost their parents; there are other types of threats facing the children of Iraq. They are the primary target of criminal gangs that kidnap children to obtain a ransom from their parents. These children are often killed when their parents are unable to provide the required amounts or due to the kidnappers’ fear of being caught by the police. This is in addition to the increased cases of child rape in Iraq, where in most cases victims are killed after enduring brutal sexual violation. What is even more disturbing is that the child victims in some cases of rape and murder are around the age of five.

In addition to this, there are an increasing number of homeless children in Iraq. According to statistics, one out of every eight Iraqi children is displaced. They are usually exploited and sent to beg in the streets or to work under harsh conditions and sometimes even used as prostitutes. They are often exposed to physical or sexual abuse, and cases have been reported where they have been exploited to carry out terrorist acts. When children involved in terrorist acts are arrested, Iraqi law does not take into consideration their special situation. They are punished  with sentences similar to those passed on adults, which often entail many years of imprisonment.

On another note, high rates of child labor in Iraq have been registered and some studies have shown that there are nearly 100,000 children in the Iraqi workforce. Moreover, 83% of Iraqi children have worked for their families on a permanent basis, without receiving any wage. Children usually work under dire and harmful conditions such as in garbage collection, brick and steel factories and farming. However, Article 29.b.3 of the Iraqi Constitution specifies that “economic exploitation of children shall be completely prohibited. The state shall take the necessary measures to protect them.” Yet, state institutions are not efficiently combating this phenomenon for many reasons, including the preoccupation by the government with issues of maintaining security and fighting terrorism. The emergence of widespread child labor in Iraq is furthermore an issue of utmost difficulty to deal with. In many cases, children are the breadwinners for their younger siblings and have no one else to rely on.

The rate of Iraqi children subject to domestic violence is very high. A report issued by the Ministry of Labor and Social Affairs revealed that five out of six Iraqi children are exposed to domestic violence across the country. Moreover, the Iraqi Supreme Judicial Council examined the draft law on protection from domestic violence. The examination revealed numerous loopholes and defects in Iraqi laws related to the protection of children from violence. This is in addition to the difficulty of applying existing laws under the tribal structure that prevails over the majority of Iraqi society.

In addition to the lack of legislation and the Iraqi government’s inability to protect children, attempts by some religious parties that participate in the government have added to the miserable situation of children in Iraq. In the latest developments on this issue, the Iraqi Ministry of Justice submitted a draft personal status law based on some religious opinions, by virtue of which it is legally permitted to marry 9-year-old girls and 15-year-old boys. Moreover, according to this law, parents may marry off their girls under the age of 9 and their boys under the age of 15.

Researchers believe that the rising phenomenon of violence against children in its various forms will lead to several problems within Iraqi society. These include the emergence of distorted generations unable to assume a positive role in their community, continuously increasing levels of illiteracy and ignorance and growing rates of crime, violence and extremism within the community.

In light of these circumstances, the Iraqi government, having signed the international Convention on the Rights of the Child, must take serious and comprehensive measures to combat this phenomenon in its various forms. The most important measures that should be taken are implementing the law on compulsory education to all children, limiting attempts to legislate religious laws contrary to the interests of childhood, legislating strict laws aimed at holding households, employers and other groups associated with violence against children accountable, boosting the role of civil society to help the government protect children exposed to violence, as well as performing other procedures followed in civilized countries.