A robust information campaign to undermine al-Qaeda in Syria would help to mitigate, although not eliminate, the dangers of the civil war. 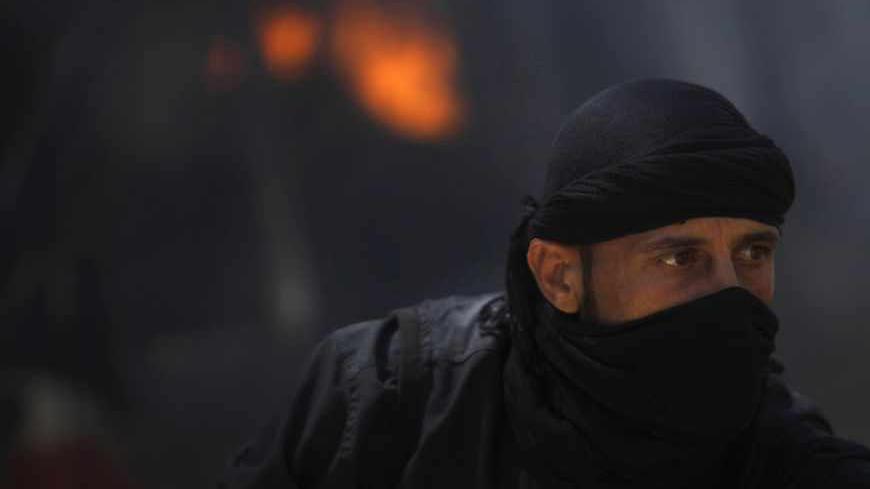 A fighter from the Islamist Syrian rebel group Jabhat al-Nusra is seen in front of a burning vehicle, caused by what activists said were missiles fired by a Syrian air force fighter jet from forces loyal to Syria's President Bashar al-Assad, at their base in Raqqa province, eastern Syria, May 12, 2013. - REUTERS/Hamid Khatib

US President Barack Obama has made a compelling case that Syrian President Bashar al-Assad’s regime has used nerve agents to kill hundreds of Syrians. A decision to use military force against the Assad regime is now rightly being debated in Congress. The United States wants to find some way to strike Assad that does not benefit the most dangerous elements of the Syrian opposition — the al-Qaeda franchises that have become increasingly important in the Syrian civil war. One way is to better use information warfare against the al-Qaeda menace.

The intelligence case presented by Obama demonstrates clearly that the Syrian regime used the nerve agent sarin in August. The Centre d’Etudes et de Recherches Scientifiques, the agency that created Syria's chemical warfare arsenal and reports to Assad, has been directly implicated in the attack.

Obama argues that the United States should use military force to respond to the chemical attack, but must avoid being sucked into the civil war that has raged since 2011. He makes a compelling case that a large-scale intervention in Syria would bog down the United States in another Middle Eastern quagmire, as happened in Iraq, and that Washington's ability to positively influence the violent sectarian struggle is severely limited. Therefore, he promises there will be no American boots on the ground in Syria.

Regardless, any military intervention that attacks Assad forces and degrades their capabilities will inevitably influence the balance of power in the civil war. The more the regime is weakened, the more the opposition gains. Indeed, critics of President Obama who want greater involvement in the civil war argue for a large-scale attack precisely to assist the opposition.

Since the opposition includes a strong and growing al-Qaeda component, such an approach could mean inadvertently helping that organization. A stronger al-Qaeda in Syria — especially one with the possibility of gaining control over some of that country's chemical arsenal should Assad be weakened — is clearly not an American interest. Whatever policy Congress endorses, it should include a robust effort to disrupt, dismantle and defeat al-Qaeda in Syria before it becomes an even greater threat to US interests.

Al-Qaeda actually has two major factions in Syria. The al-Nusra Front, or Jabhat al-Nusra, was formed in early 2012 with the assistance of al-Qaeda’s Iraqi franchise. The group initially played down its  al-Qaeda connection, but now openly trumpets its loyalty to al-Qaeda's leader, the Egyptian Ayman Zawahiri, currently hiding out in Pakistan. Sunnis from across the Arab world have been streaming to al-Nusra, with scores already martyred in the Syrian conflict.

Al-Qaeda in Iraq (AQI) is likewise directly active in Syria. Its leader, Abu Bakr al-Baghdadi, also known as Abu D’ua, masterminded the July attacks on two Iraqi prisons that sprung hundreds of al-Qaeda members and sympathizers. He had in April announced that AQI, branching out, would henceforth be known as the Islamic State of Iraq and al-Sham. (Al-Sham refers to what is today Syria, Lebanon, Jordan and Israel.)

Baghdadi also proclaimed his assumption of the leadership of al-Qaeda across the Fertile Crescent, pointing out that in 2004 Osama bin Laden had appointed his predecessor, AQI founder Abu Musab al-Zarqawi, commander of the area. In August, the State Department revealed that Baghdadi had transferred his base of operations to Syria, certainly making it harder for Iraqi security forces to pinpoint his whereabouts. The United States is offering a $10 million reward for information resulting in his capture or death.

Mohammad al-Golani, a Syrian who worked with Zarqawi in Iraq and now leads the al-Nusra Front , claims to be independent of Baghdadi, instead reporting directly to al-Zawahiri. Nonetheless, on the battlefield, the two al-Qaeda affiliates are cooperating in the fight to bring down Assad.

The United States and its allies have tried to strengthen the more moderate elements of the opposition, but with only limited success. Meanwhile, al-Qaeda has formidable assets, including its base in Iraq, foreign volunteers eager to conduct suicide missions and a ruthlessly simple ideology that depicts the Assad regime as nonbelievers and apostates because they are Alawites backed by Shiite Iran. Al-Qaeda thrives on sectarian animosity, so it seeks to turn the civil war into a sectarian conflict pitting Sunnis against Alawites and Christians.

One way to mitigate the danger of inadvertently helping al-Qaeda in Syria would be to deploy a more aggressive information campaign to expose it for what it is and what it wants. Al-Qaeda in Syria seeks to portray itself as a combination of freedom fighters and Islamic holy warriors. In fact, it is a bunch of thugs and murderers. Zarqawi, the figure from whom both factions draw inspiration, was a petty Jordanian criminal who turned to violent jihadism in jail and then embarked on a murderous campaign against Iraqi Shiites, killing thousands of Muslims.

The 2006 campaign in Iraq to bring Zarqawi to justice or kill him used information warfare to expose him as a murderer and to turn his supporters and sympathizers against his carnage. The intelligence community, for example, published intercepted messages between Zarqawi and Zawahiri that exposed serious internal differences within al-Qaeda and strong criticism of Zarqawi’s violent excesses by the top leadership of the group in Pakistan.

The United States and its partners should do more to expose al-Qaeda’s factions in Syria as the terrorists they are. A campaign providing more information about the groups, and especially their leaders, would damage their credibility. Who are al-Baghdadi and Golani really? What are their real names and backgrounds? What are their connections to Zawahiri and Zarqawi? Who is calling the shots in al-Qaeda’s war in Syria? The more information brought to light about these figures, the less they are likely to be seen as freedom fighters or holy warriors.

The United States' Arab allies, especially Jordan, which has an excellent intelligence service, could play a significant role in such a campaign. So too can Washington's European partners with expertise in the area. The Turks, Saudis and Qataris, who are arming the opposition, should be included in the effort.

There is, of course, a downside. The Russians will argue that the United States is just exposing the Syrian opposition for what it really is — an al-Qaeda-dominated movement. Since 2011 Moscow has been parroting the Assad regime’s line that the opposition has always just been a bunch of terrorists. In fact, however, the uprising against Assad began without any help from al-Qaeda, which was surprised by the start of the Arab Awakening and slow to get on the bandwagon against Assad. It was only when the regime resorted to brutal, massive violence that al-Qaeda became a player. In that sense, Assad — having created a self-fulfilling prophecy — is the real grandfather of al-Qaeda in Syria.

There are no good options in Syria for Washington and its allies. Any military intervention is certain to have unintended negative consequences. Americans are right to worry that the country will be dragged into another Iraq-like, expensive and ultimately futile quagmire.

There is no simple answer to the difficult challenges Syria’s civil war presents, and there is no way to hermetically separate attacking Assad for his criminal use of chemical weapons from the larger drama of the civil war. A more robust information campaign to undermine al-Qaeda in Syria would help to mitigate, but not eliminate, the dangers of the civil war. It should become part of the strategy Congress endorses, with or without military action.