Meir Javedanfar writes that Iran, Hezbollah and Israel share a common and deadly enemy in Jabhat al-Nusra and radical Salafist groups, whose influence is growing. 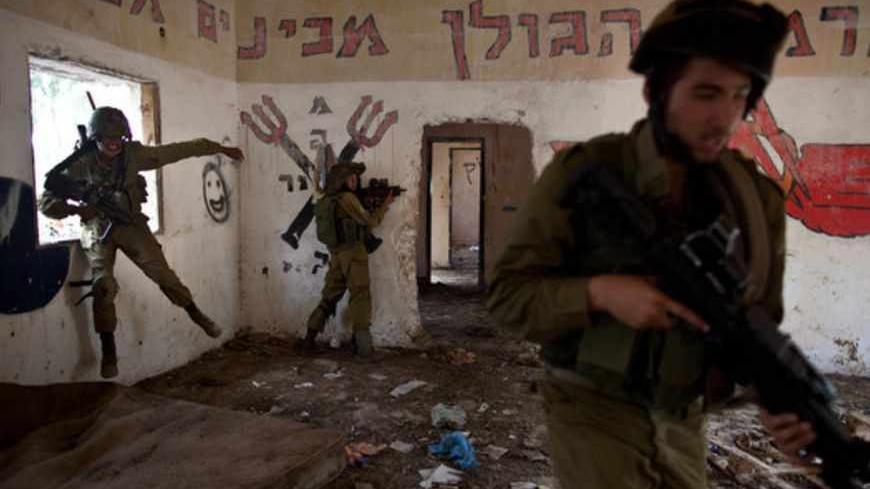 Israeli soldiers of the Golani brigade take part in an exercise near the border with Syria on May 6, 2013, at the Israeli-annexed Golan Heights. - Uriel Sinai/Getty Images

Israel and Iran's ally Hezbollah will soon miss the old days of fighting each other.

The reason: Fundamentalist al-Qaeda-affiliated movements who hate both Jews and Shiites with a passion are emerging in Syria. These include groups such as Jabhat al-Nusra, which has openly and publicly pledged allegiance to al-Qaeda commander Ayman Al Zawahri.

Such groups are growing in numbers. According to an article in the Small Wars Journal quoting the UN High Commissioner for Human Rights report for December 2012, “Newly formed opposition groups are more likely to affiliate and attach themselves to Islamist factions such as Jabhat al-Nusra than to the FSA [Free Syrian Army] or other less radical opposition groups.”

Hezbollah is already facing such groups in Syria, causing it to lose four to five fighters a day. Once Assad falls or even before, extremist al-Qaeda-affiliated groups are very likely to increase the ferociousness of their attacks against Shiites and Alawites living in Syria. Bosnia-style massacres or even larger ones can not be ruled out. Such groups could also start attacking Hezbollah-controlled points on Lebanon's border with Syria. There is also a significant chance that they will try to permeate Lebanon in order to attack its Shiite citizens using suicide bombers — a well known method used by al-Qaeda against Shiites in Iraq for many years.

Meanwhile, we in Israel could expect hit-and-run machine-gun and mortar attacks and even Katyusha launches against Israeli border posts and cities by such groups. Efforts to penetrate Israel's border could increase significantly.

And if such groups get their hands on chemical weapons in Syria, they would have little to no scruples about launching them against Israeli or Shiite and Alawite targets in Lebanon or Syria.

Making it particularly difficult for Hezbollah and the Israel Defense Forces to fight these groups, they are fanatical and have no central authority. This means that the concept of military deterrence is unlikely to work with them, as there is no single commanding authority that can be attacked and forced to cease their military operations.

This is in direct contrast to the Hezbollah vs Israel conflict, in which both sides have a structured military hierarchy. Furthermore, political considerations impact the decision-making process as those commanding the armed forces are answerable to their political leaders, meaning the concept of deterrence works with both parties, and has done so at different times. Jihadist al-Qaeda forces are answerable to no one, nor do they have any political ambitions or considerations.

Both Iran-allied Hezbollah and Israel share a border with a sectarian war which some predict to be more ferocious than Iraq, with spillover effect predicted into neighboring countries.

Due to their small size, targeting small pockets of Jihadist units requires precise intelligence, thus making intelligence sharing key in the war against them.

This is why the governments of Iran and Israel must consider the option of talking to each other, be it overtly or covertly.

Making such a decision will not be easy for either side. In Israel, the Iranian government's denial of the Holocaust and calls for Israel's destruction have created many enemies. At the same time, in Iran, the regime's anti-Israel rhetoric forms much of its character. It has invested much in its anti-Israel policies and rhetoric both at home and abroad since the start of the revolution.

However, the severity of the upcoming situation in Syria means that Iran and Israel have a common enemy that will pose a severe threat to their allies and citizens. Although Iran does not share a border with Syria, it can not allow its Shiite ally Hezbollah and Syria's Allawites to be run over by al-Qaeda affiliated organizations, or it would lose what remains of its influence in the region. At the same time, Israel does not want to see a repeat of a civil war on its border, as was the case in Lebanon in the 1970s. The anarchy of such conflicts create the perfect environment for terrorist organizations to launch attacks against Israeli cities.

The cost of not talking to each other could be much higher than the cost of communicating and even cooperating against the common enemy emerging in Syria.

Political differences aside, the fact remains that Iran, its Shiite allies and Israel have a number of stark strategic similarities and common interests. Being minority non-Sunnis in an Arab Sunni-majority Middle East is the most striking similarity. Iran witnessed the direct costs of being such a minority during its war against Iraq, while Israel has been grappling with this problem for decades. The two sides will face this common problem again in Syria.

When it has served their interest, Iran and Israel have talked and cooperated before. The Iran-Contra Affair, in which Iran bought weapons from Israel, is just one example.

The Syrian crisis is creating an opportunity for both sides to talk and cooperate again. This is one crisis that should not be wasted. Not trying would be the worst option.

Meir Javedanfar is an Iranian-Israeli Middle East analyst. He teaches contemporary Iranian politics at the Interdisciplinary Center in Herzliya and tweets as @meirja.