The US, Russia — and Iran — resurrect diplomacy on Syria; Iran and Israel should consider talking about Syria; Palestinian Islamic Jihad. 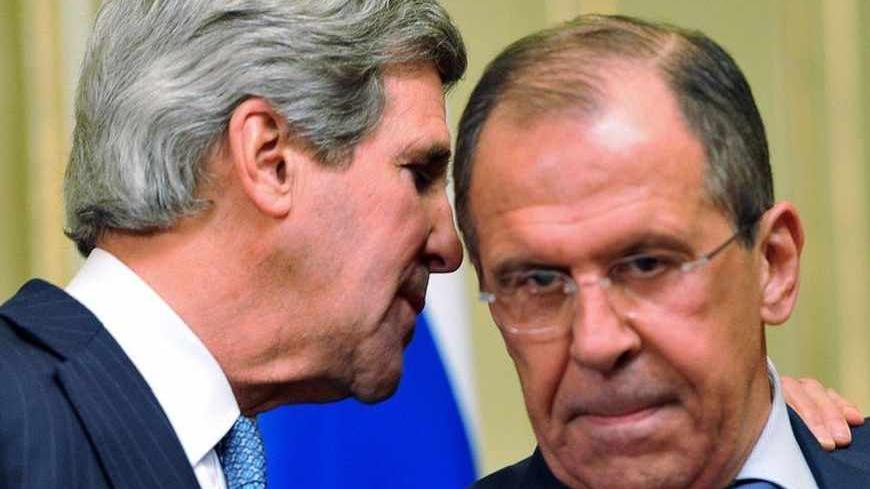 US Secretary of State John Kerry whispers to Russian Foreign Minister Sergey Lavrov during a joint news conference after their meeting in Moscow, May 7, 2013. Russia and the United States agreed to try to arrange an international conference this month on ending the civil war in Syria. - REUTERS/Mladen Antonov/Pool

The prospects for a political solution in Syria showed a pulse this week, with a flurry of meetings by US, Russian, Iranian and regional diplomats that could lead to long overdue direct negotiations between Syria and the opposition.

This is a welcome reprieve, as diplomacy seemed to have taken a holiday the past few weeks with attention focused on the unresolved question of whether Syria used chemical weapons and therefore crossed a US “red line,” which would be a “game changer,” and the focus in Washington on what “more” the United States can do to provide armed support for the rebels, enforce a no-fly zone or other military options.

As this column has pointed out, chemical weapons' use will only be proven by UN inspections (which the Syrian government should allow immediately), and limited military options such as those being discussed will only serve to accelerate the partition and collapse of Syria, prolong the fighting and killing, and increase refugee flows to Syria’s neighbors.

More promising than military options, and a respite from critics of US President Barack Obama for showing some prudence about US military options in Syria, is the announcement by US Secretary of State John Kerry and Russian Foreign Minister Sergey Lavrov in Moscow on May 7 that they are working to convene an international conference on Syria, a follow up to the Final Communique of the Action Group for Syria from June 2012.

Also on May 7, Iranian Foreign Minister Ali Akbar Salehi said in Amman: “We have called on the [Syrian] opposition to negotiate with the government and form a transitional government and determine their own future.”

Salehi traveled from Amman to Damascus to meet with Syrian President Bashar al-Assad, while Jordanian Foreign Minister Nasser Judeh traveled to Rome to meet with Kerry.

As Fyodor Lukyanov wrote last week for Al-Monitor, Kerry’s meetings in Moscow seemed a step forward in the US-Russia re-set, including on Syria.

Lukyanov observed that Russia has not budged in its own approach to Syria, and that the United States and Russia differ at this point only on the sequence of events, meaning the role of Assad. Russia is sticking to its line that Syria’s sovereignty is a first order principle and outside powers cannot dictate who should lead.

Lukyanov observed: “First Assad leaves, then the process of establishing a new political regime in Syria begins, or the other way around. Moscow supports the second version, and Washington the first.”

On May 9, two days after his meetings in Moscow, Kerry said at a news conference in Rome with Judeh: “President Assad will not be a component of that transitional government.”

Assad’s role will be, but should not be, a sticking point to bringing the parties together. The Geneva communique makes no mention of Assad and urges both sides to begin negotiations. It's doubtful the Syrian president will be showing up in person to this conference, so best to begin a diplomatic work-around and get on with it. It would be unrealistic to assume whoever shows up from Damascus will not have Assad’s endorsement. To believe that there will be a cease-fire, let alone a discussion on a transition, without Assad’s blessing is a fantasy. And to think that Assad will grant that blessing absent Iran’s backing is a further illusion.

Iran and Israel should talk about Syria

Meir Javedanfar made the case this week that Israel and Iran should be talking about Syria, either overtly or covertly, as they share common interests and common enemies in the rise of Salafi groups in Syria and throughout the region.

This column has discussed the new strategic landscape in the region which necessitates the recognition that the missing piece for a regional settlement is some type of understanding between Israel and Iran, as Javedanfar advocates.

“The severity of the upcoming situation in Syria,” Javedanfar writes, “means that Iran and Israel have a common enemy that will pose a severe threat to their allies and citizens. Although Iran does not share a border with Syria, it can not allow its Shiite ally Hezbollah and Syria's Alewites to be run over by al-Qaeda affiliated organizations, or it would lose what remains of its influence in the region. At the same time, Israel does not want to see a repeat of a civil war on its border, as was the case in Lebanon in the 1970s. The anarchy of such conflicts create the perfect environment for terrorist organizations to launch attacks against Israeli cities.

"The cost of not talking to each other could be much higher than the cost of communicating and even cooperating against the common enemy emerging in Syria.

"Political differences aside, the fact remains that Iran, its Shiite allies and Israel have a number of stark strategic similarities and common interests. Being minority non-Sunnis in an Arab Sunni-majority Middle East is the most striking similarity. Iran witnessed the direct costs of being such a minority during its war against Iraq, while Israel has been grappling with this problem for decades. The two sides will face this common problem again in Syria.”

Asmaa Al-Ghoul’s three-part series from Gaza on Palestinian Islamic Jihad (PIJ), including interviews with PIJ officials, reveals uncommon reporting, analysis and access. Al-Ghoul’s series is another example of the unusual and exceptional coverage that we have come to expect from her and the Palestine Pulse.