Do the US, Iran Agree on Red Line For Syrian Chemical Weapons?

The US and Israel escalate the war in Syria; Russia, Iran, Hezbollah, Khaled Meshaal; and Al-Monitor launches Iran Pulse. 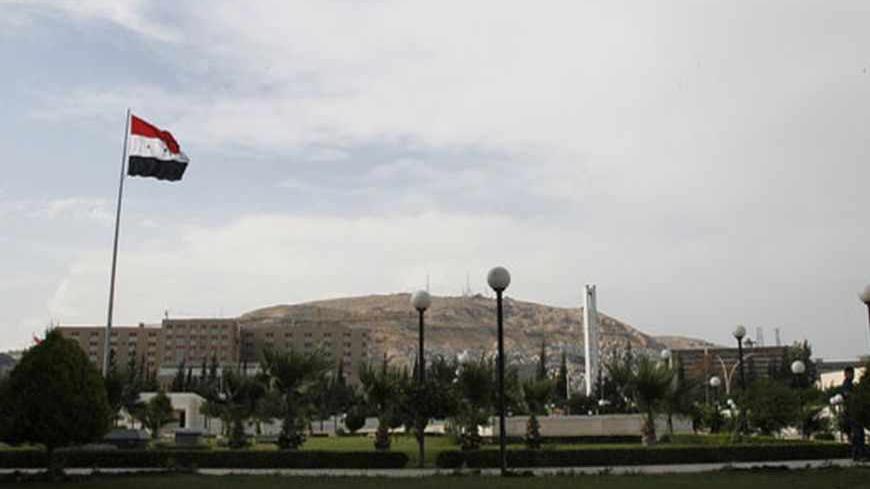 A view shows part of Mount Qassioun and part of Damascus city, in this photo taken from the Syrian cabinet building, May 5, 2013. - REUTERS/Khaled al-Hariri

It was less than three weeks ago [April 17], when Hagel and Chairman of the Joint Chiefs of Staff Gen. Martin Dempsey testified to the Senate Armed Services Committee that US President Barack Obama had not asked for military options in Syria, with Dempsey adding that he had rethought his recommendation last year to arm the Syrian rebels because he was no longer sure he “could clearly identify the right people” within the opposition to supply arms.

The US' turnaround and the Israeli attack, which has been in the works since Obama’s visit to Israel last month, according to Ben Caspit, follow a US intelligence assessment made public on April 25, based on evidence from Great Britain, France and Israel, and made by US intelligence agencies with “varying degrees of confidence” of “small scale” chemical weapons use, based upon “physiological samples” where “the chain of custody is not clear.”

There were also four key events which took place on April 30: the meeting of the Arab League delegation with US Secretary of State John Kerry about a revived Arab Peace Initiative, a fiery speech by Hezbollah leader Hassan Nasrallah, an Israeli attack on Gaza and Iran’s statement that chemical weapons use is a red line in Syria.

As the United States and United Nations proceed with their investigations into the allegations of chemical weapons use, Washington, its Arab allies and Israel are now looking to increase military pressure on Syrian President Bashar al-Assad, so that Assad will agree to a political solution that includes his stepping aside.

Such an approach will be difficult, as this column has warned, absent an even greater intensification of military force to topple the Syrian government, which would have its own consequences, or negotiating with Iran, Assad’s closest ally. Until then, the war will continue to take its toll on Syria and the region. If there was ever a doubt before, and there should not have been, Syria is no longer just a battle of “the opposition” against the “Assad regime.” Those days are long gone. Syria is now a full scale Middle East War, with sectarian overtones and direct Israeli engagement, with the United States and Israel taking the side of Qatar, Saudi Arabia and Turkey (read Sunni) to topple Assad, and break or set back the Iran-Syria-Hezbollah (read Shiite) axis.

Lavrov: "Oil on the Fire"

Kerry will travel to Moscow this week for discussions on Syria.

Fyodor Lukyanov wrote for Al-Monitor that there is now the possibility of a "dramatic divergence" between the United States and Russia.

On May 3, Russian Foreign Minister Sergey Lavrov compared armed support for the Syrian rebels to pouring “oil on the fire,” called for direct talks between the Syrian government and the opposition, claimed that the chemical weapons matter is being politicized and urged the UN investigation to commence.

Simply put, it does not appear that Moscow is budging from its position that it will not endorse any finding of chemical weapons use absent a UN investigation, will reject calls for negotiations that do not include the Syrian government, and will oppose arms to Syria’s rebels, likely thwarting any UN Security Council sanction for intervention in Syria.

Kerry might finally consider taking up Iran’s offer from June 2012 to discuss Syria.

This column recommended last week that chemical weapons use could be another opening for a US-Iran dialogue on a political solution in Syria.

On April 30, Iranian Foreign Minister Ali Akbar Salehi said that chemical weapons use in Syria would be a "red line" for Iran, using Obama’s own language, while suggesting Syrian rebel forces should be investigated and adding “Iran has consistently opposed the use of weapons of mass destruction, as well as chemical weapons by any country, and has sent a letter to the UN Secretary-General Ban Ki-moon in this respect.”

Interestingly, Salehi will travel to Jordan for consultations on Syria this week. King Abdullah II of Jordan met with Obama in Washington on April 26.

On April 30, Hezbollah leader Nasrallah said that “Syria has real friends in the region, and the world will not let Syria fall into the hands of America, Israel or takfiri [radical islamist] groups."

Nasrallah added, "The battle is long, although we have never called for combat … you cannot topple the regime militarily, and the facts on the ground prove that, although you have only the Syrian army and the pro-regime popular forces fighting until now … No Iranian forces have entered Syria at the moment. If this is the situation so far, how would things be in the future should resistance forces and other nations intervene?"

As Ali Hashem wrote for Al-Monitor, “It was as if Nasrallah was warning the opposition and its regional and international backers that the war is no longer between Syrian President Bashar al-Assad and the rebels, but a regional war fought in Syria.”

There was much fanfare in Washington this week when Qatar Prime Minister and Foreign Minister Hamad bin Jassem al-Thani led an Arab League delegation reviving the Arab Peace Initiative of 2002, with the prospect of land swaps around the 1967 borders as a teaser for Israel to finally embrace the initiative.

The Peace Initiative had until now been one of those missed opportunities in the Arab-Israeli peacemaking. Unlike the first time, now the initiative has the weight of the United States behind it. On April 30, Kerry quoted Israeli Justice Minister Tzipi Livni as saying, “It sends a message to the Israeli public that this is not just about us and the Palestinians.”

It is worth noting that on the same day Kerry was meeting with the Arab League delegation, Israeli planes bombed Gaza in response to rocket fire in the first cross border action by Israel since the November 2012 truce, as reported by Mohammed Suliman for Al-Monitor.

Akiva Eldar writes for Al-Monitor that Israeli Prime Minister Benjamin Netanyahu is unlikely to embrace the initiative, as he has been unwilling to concede the Palestinian right to self-determination. Eldar further observes that the initiative is part of a new US regional alignment to counter the Iraq-Syria-Hezbollah axis: “The Obama administration believes that a diplomatic breakthrough on the Israeli-Palestinian front, on the basis of the Arab Initiative, could supply the glue for a new regional alliance. This approach enables Israel to enjoy immediate defense dividends, even before it is forced to make a single territorial compromise. Israel will be able to arrive at a two-state solution based on a broad consensus among all the Arab states regarding core issues. But time is not on Israel's side. The Arab League delegates hinted to their interlocutors in Washington that if diplomatic progress is not achieved within six months, the Arab League will withdraw its initiative. This will seal the tiny remaining crack in the window of opportunity for a peace agreement.”

The news of the Washington talks, combined with the bombing, fell flat in the West Bank and Gaza, as Dalia Hatuqa reported for Al-Monitor, with Palestinian Authority officials saying that the Arab League proposal was nothing new, Hamas and the Popular Front for the Liberation of Palestine criticizing it and ordinary Palestinians expressing little hope that it will make much of a difference.

Meshaal: US Peace Efforts “Will Fail”

Khaled Meshaal, the recently re-elected head of the Hamas Political Bureau, said in an exclusive interview with Adnan Abu Amer for Al-Monitor, that “Kerry did not have a serious project or vision toward the Arab-Israeli conflict. We in Hamas don't place our hopes or bets on the White House or any international capital.”

Meshaal referred to the Israeli government as a “government of settlers,” adding that Kerry “avoided any confrontation with the government and put forward ideas of economic peace and investment projects in the West Bank, without addressing the real crux of the conflict, which is the occupation. This choice was a mistake on the part of the US administration, and therefore they will fail in these endeavors as they have failed in the past.”

Al-Monitor is pleased to announce the launch of the Iran Pulse, featuring original reporting and analysis from and about Iran.