Davutoglu Cautiously 'Not Pessimistic' On Syria 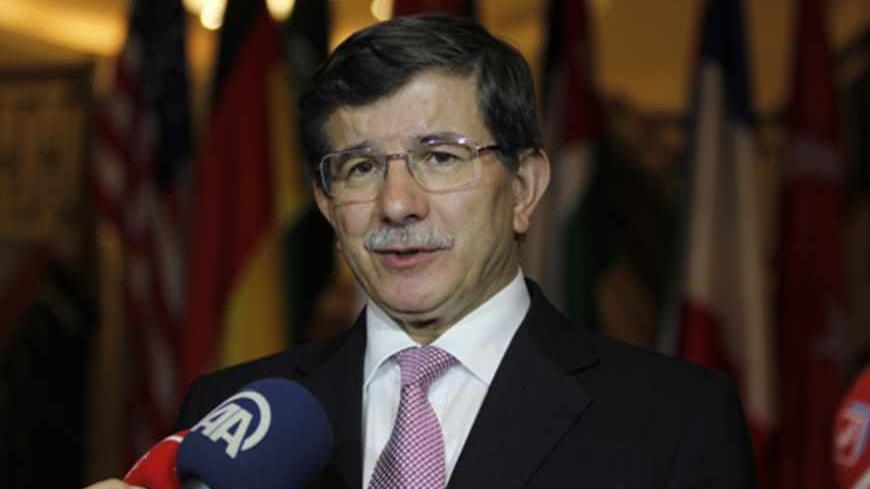 Turkish Foreign Minister Ahmet Davutoglu speaks to the media after the Friends of Syria alliance meeting in Amman, May 22, 2013. - REUTERS/Muhammad Hamed

Listening to Foreign Minister Ahmet Davutoglu in a hall of a five-star hotel in Istanbul, I was thinking how diplomacy is in a way a dance of words, and differences of opinions on how that dance should be choreographed affects the fate of millions of people and could cost thousands of lives.

Following the increasing pace and intensity of criticisms directed against Turkey’s Syria policy following the car bombs in the border town of Reyhanli on May 11 and Prime Minister Recep Tayyip Erdogan’s Washington visit and meetings with US President Barack Obama on May 16, Davutoglu did something he had been neglecting for some time. He invited about 20 columnists and opinion leaders to the Conrad Hotel in Istanbul and spoke to them for a full three hours on Turkey’s Syria policy — step by step, phase by phase. As we were leaving the hall, I said to an adviser of the minister that I was expecting to be called to breakfast the next morning to continue discussing Syria.

Davutoglu’s bottom line was that Turkey had never pursued a Syrian policy that put the military option first. To the contrary, it had always given priority to the diplomatic option, so much so that its policy in 2011 had defended Syrian President Bashar al-Assad to the extent of being perceived as appeasement. In 2012, when Turkey began calling for Assad’s departure, it was still promoting the idea of Assad supervising the transition phase.

This is not what Turkey advocates now. Ankara does not want Assad to preside over the transition period. Davutoglu thinks that "for a man responsible for shedding the blood of 100,000 people to continue ruling is not ethically and politically possible even in a transition period." Moreover, he does not think this is a realistic option because the Syrian opposition which has to have a part in the transition will not accept it.

The foreign minister in his mostly off-the-record mixture of chats and briefings to elaborate on unfairness of the criticism of Turkey’s Syria policy also shared some information on the forthcoming Geneva II conference [planned for mid-June] that is expected to search for a non-military option of a compromise settlement. Although he said they will try hard to get results from Geneva II, he did not want to promise success because that will not be easy as long as Russia’s basic attitude to the Syrian regime does not change. The divergent interpretation of Geneva I by the parties on the Russian side of the equation has prevented reaching a concrete result for the past year.

What was the origin of divergence of interpretations of Geneva I?

On the third page of the five-page final communique, the Action Group for Syria adopted under subtitle II, "Clear Steps in the Transition,” the following:

Davutoglu said Russia based its objection on the phrase that "it could include members of the present government,’’ though the opposition is also mentioned in the same sentence. When one reads the next phrase: “shall be formed on the basis of mutual consent,” it is obvious that the opposition could not be expected to accept Assad. In any case, the opposition had already made its rejection known and any transitional governing body that will exercise full executive power has to be without Assad.

Logical. But on the road to Geneva II this ambiguity in the final communique of Geneva I is not resolved. We do not yet know who will participate in the Geneva II conference, and what will be the logistics and choreography of this joint US-Russia product — that is somewhat reminiscent of the Cold War era.

Constructive ambiguity is an essential tool of diplomacy but Geneva I could hardly qualify as one. Perhaps it is better to call it “stumbling ambiguity.’’

If you ask what makes Ahmet Davutoglu enthusiastic on the road to Geneva II, the foreign minister has alluded to two important developments in Turkish diplomacy in May. In this framework he assesses the visit of Erdogan and himself to Washington as a “synchronization between Turkey and the United States."

The second important development was the accord reached on Syria by 11 core countries before the Geneva II meeting on the initiative of Davutoglu and US Secretary of State John Kerry. On May 22, the Joint Statement on the Participating Countries in the Amman Ministerial Meeting on Syria was issued. The introductory paragraph reveals the new constellation of Western, Arab and regional actors prior to Geneva II:

“The Prime Minister and Minister of Foreign Affairs of Qatar and the Foreign Ministers of Egypt, France, Germany, Italy, Saudi Arabia, Turkey, UAE, UK, USA, and Jordan came together … to deliberate on the developments in Syria and to reemphasize their support to find a political solution to the crisis in Syria. The representatives from the leadership of the Syrian National Coalition of the Revolutionary and Opposition Forces also attended part of the meeting."

The vital paragraph of the Amman Joint Statement Davutoglu distributed personally one by one to everyone invited to his Istanbul briefing read:

"The Ministers identified as the corner stone of a political solution the formation of a transitional governing body through mutual consent, within a defined and agreed upon timeframe, to assume full executive authority, including all powers of the Presidency in addition to control over the armed forces and the security and intelligence apparatuses, for an agreed upon and defined timeframe for the transitional period."

For Davutoglu, Washington was the synchronization of Turkey-US relations while Amman was the "consolidation” of a joint position of 11 countries.

If you ask synchronization and consolidation of what, the answer is easy: For transition in Syria without Assad.

Would post-Geneva II bring a solution for Syria as simple as the response to the two questions above? Let's cross our fingers and remain cautiously optimistic.

That was the overall line of Davutoglu’s long conversation with us on Syria.