Sadr Wants Talabani to Step Down 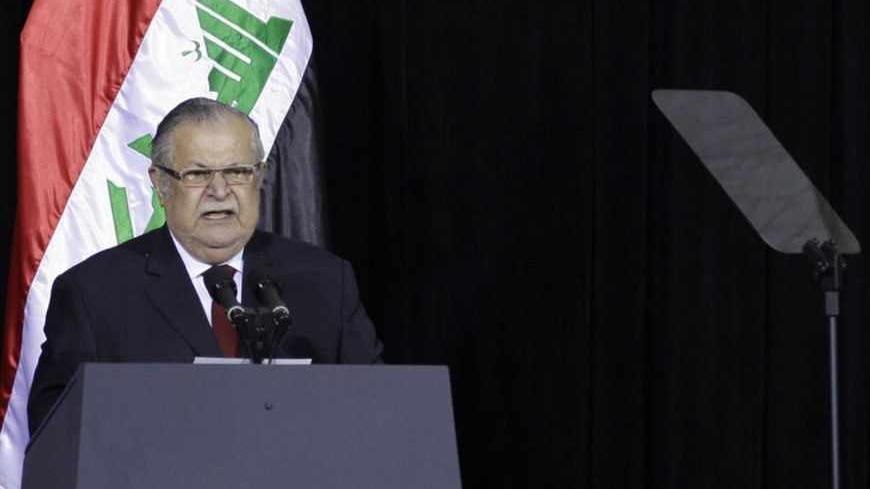 Iraqi President Jalal Talabani (L) speaks in Baghdad during one of several planned ceremonies to mark the end of the US military presence in Iraq, Dec. 1, 2011. - REUTERS/Khalid Mohammed/Pool

The May 17 publication of four photos of Iraqi President Jalal Talabani created an atmosphere of joy and celebration among supporters of the Patriotic Union of Kurdistan (PUK), especially in the Talabani stronghold of Sulaymaniyah. The images are the first to be released in the five months since Talabani's transfer to Germany on Dec. 20, 2012, for medical treatment following a stroke.

Amid the positive outpouring of emotion, the photos' release raised questions among observers about their timing and about statements made by Kirkuk Governor Najmaldin Karim, who is also Talabani's doctor, and the German physicians treating the president.

As the photos of Talabani at a Berlin clinic were being broadcast via PUK-affiliated satellite channels, including KurdSat and Gali Kurdistan, residents of Sulaymaniyah and Kurdish towns hoisted photos of Talabani and PUK flags, fired guns into the air and gathered in front of PUK offices. Massoud Barzani, president of the Kurdistan Regional Government and leader of the Democratic Party of Kurdistan, expressed his joy at the publication of the photos, posting on Facebook, "I am very pleased with the news of the improving health of Mam Jalal, the president of the Republic of Iraq. I ask God Almighty to completely cure the president, and hope that he can return to us in full health as soon as possible." Talabani has been undergoing treatment for over three months.

In the photos, Talabani is sitting in the garden of the clinic surrounded by his medical team and advisers. A short video was also broadcast featuring Dr. Karim and Talabani's German doctors, with Karim asserting that the president is in good health compared with five months ago and continues to improve day by day. The president does not appear in the video. Karim, a member of the PUK politbureau, is the only official authorized to make statement's about Talabani's health.

On May 10, a week before the publication of the photos, Qubad Talabany, KRG Minister for Coordination & Follow Up, tweeted that his father, Mam Jalal, "continues to make good progress!"

Some political observers are skeptical of the photographs, in which Talabani appears seated in only one position. They stress that the photos were released after the prosecutor general of the Iraqi Council of Representatives issued a statement, on May 13, calling on the head of the council to take legal action pursuant to the provisions of Article 72.II.c of the Iraqi constitution in the event of a vacancy in the office of the president. The request is also based on provisions of Article 1 of amended Public Prosecution Law no. 159 of 1979.

Shiite leader Muqtada al-Sadr supported this request and said in a statement, "It is necessary to take the necessary steps to appoint a new president of the republic to replace President Jalal Talabani." Sadr also thanked the public prosecutor and asked him to "be independent."

But the Legal Committee in parliament responded via Kurdish MP Khaled Shawani, deeming this request illegal and saying "Article 72 of the constitution talks about the vacancy in the post of president of the republic, not an absence. Vice President [Khodair al-Khozaei] has assumed the responsibilities of the presidency." He continued, "Parliament is not obliged to implement this request."

Article 64 of the constitution defines the role of the president as follows: "The President of the Republic is the Head of the State and a symbol of the unity of the country and represents the sovereignty of the country. He safeguards the commitment to the Constitution and the preservation of Iraq's independence, sovereignty, unity, the security of its territories in accordance with the provisions of the Constitution."

The Kurdish writer Massoud Abdul Khaliq, also a political analyst and official with the Standard Institute, an independent Kurdish media organization, believes that the published photos do not reflect a reinforcement of the hopes of the party's leadership that Talabani will be able to perform in his position as he did in the past at the local, regional and international levels.

In an interview with Al-Monitor, Abdul Khaliq observed, "The photos give us some hope that Talabani is doing well. However, they are still photos that make us think that he will not be able to return to political work." He stressed, "I think that these photos came as a result of pressures experienced by the leadership of his party, especially after Iraqi prosecutors called for filling the void left by the president."