As Iraqi President Jalal Talabani continues to undergo treatment in Berlin, Iraqi leaders are indecisive on how to proceed in his absence, writes Ali Abel Sadah. 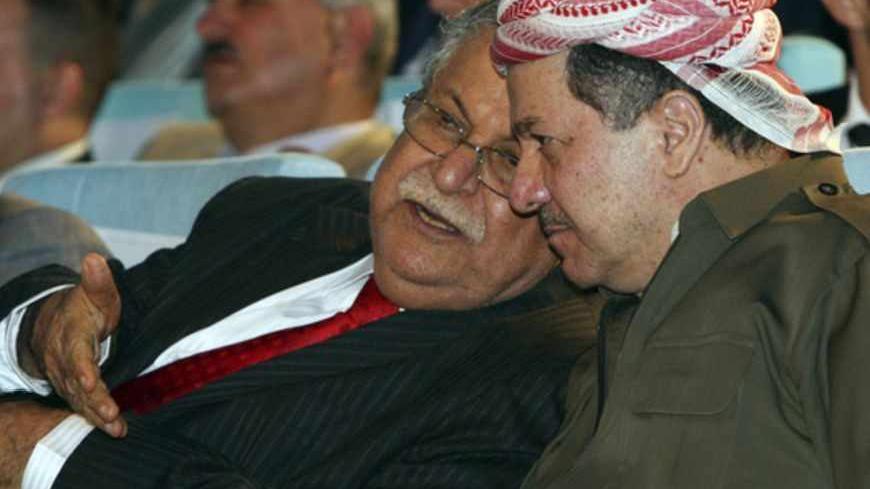 Five months have passed and Iraq is still without a head of state. The president [Jalal Talabani], who is ill and has been undergoing treatment in the German capital of Berlin, is turning out to be quite the mystery in Iraqi politics at present.

The sole source entitled to speak about his health condition is Najmeddine Karim, the Kurdish governor of the city of Kirkuk and head of the medical team supervising the health of Talabani, who is also a leading Kurdish politician. Yet, Karim does not utter a word that might let the public know what is going on in the treatment room in Berlin. He is simply using a few tactful terms such as “the president is getting better" and "the president has started to become aware of what’s going on around him, and is talking to some of his friends.”

On Nov. 18, 2012, Talabani had a health emergency and was transported to the hospital following the intensive efforts that he made ​​to bring about reconciliation in the country. A medical team supervising his health said that he is unable to speak or walk. There had been conflicting reports on his health before he was moved to Berlin. There, the detailed records of the president’s illness have disappeared, and there has not been much news on his health.

Al-Monitor contacted Kurdish political leaders, some of whom are close to the president's family. Their statements did not differ from what Dr. Karim said. In the search for more information, there was a video showing Turkish Prime Minister Recep Tayyip Erdogan shaking hands with Qubad Talabani, the president’s son, in a meeting with representatives of the Kurdistan Regional Government. [In the video] Erdogan asked: “How is your father?” Qubad Talabani answered with a brief sentence in Kurdish: “My father is in a very good condition.”

The most recent meeting of the Kurdish parties did not even touch on the president’s health condition. Since March, Kurdish political movements, Kurdish ministers and members of parliament in the federal government have taken the initiative to hold intensive meetings to take a position regarding the political crisis. It was strange that Talabani’s issue and its repercussions were not included in these discussions.

In an interview with Al-Monitor, a political source familiar with these meetings and who spoke on condition of anonymity said: “The Kurdish parties did not discuss President Talabani’s return to the country or developments regarding his health condition ... Thus far, party leaders have not made any future arrangements for his return.”

When Al-Monitor tried to press further regarding the future of the presidency in Iraq, the source, who preferred to remain anonymous, had reservations about providing an answer. He stated, “Karim is the only one entitled to speak … I have nothing else to say.”

In the [northern] city of Sulaimaniyah, the birthplace and political stronghold of Talabani, Al-Monitor spoke to Kurdish journalists and politicians about the presidential conundrum. No one knows anything, except for some who said that the president did not attend the Kurdish Nowruz celebration this year, which is a national holiday marking the Kurdish New Year and is celebrated on March 21. This means that things are bad.

This ambiguous situation and tense media atmosphere have allowed unconfirmed reports of Talabani’s condition to emerge in local Iraqi press. Earlier in April, a press report circulated stating that Talabani's health had significantly deteriorated. The news was quickly denied, but not by Dr. Karim — “the only person entitled to speak.” A statement by the Iraqi embassy in Berlin was distributed to the media on April 2, saying that “there has been an increasingly steady improvement in the president’s health, and everyone is looking forward to his return to the country, as soon as the physicians and his health allow him to do so.”

Nearly four months ago, no one dared to give any information on the development of the president’s health condition and any contacts with his medical team in Germany were confidential.

Iraq remains without a president. Despite the symbolic nature of his position, Talabani represented an element of balance in the political equation, given his personal characteristics. They enabled him to manage political tensions and sponsor dialogue between opponents, among whom it was hard to find a common language during these pivotal years in Iraq.

Although it is constitutionally impossible to continue with a vacant presidential seat, the Iraqi political blocs have been avoiding to talk about an alternative.

In such a situation, the Iraqi Constitution stipulates that, “if the position of the president of the republic becomes vacant for any reason, a new president shall be elected to complete the remaining period of the president’s term.”

Iraqi political blocs seem to be satisfied with the presidential absence. This is probably for two reasons. The first is that they do not have time to think of an alternative president of the republic. In fact, the crisis of the Sunni protests against the government of Iraqi Prime Minister Nouri al-Maliki reached its peak in February and early March with frequent talk that the situation could turn into a civil war. Thus, there was no time to think about the president, although his presence had at times represented an occasion to prevent the explosion of different crises.

The second reason is for fear of Talabani’s party political circles — the Patriotic Union of Kurdistan (PUK) — in case it actually decides to look for an alternative to the ill president.

Since the absence of Talabani, the Kurdish and Iraqi public have noticed Iraqi Kurdistan President Massoud Barzani’s interest in the party of his historical peer. He said on a previous occasion that he “would be the father of all supporters of the PUK.” This angered senior political leaders close to the president, and signs of a new dispute between the Kurdish poles has begun to emerge.

In general, Iraqi politicians would rather not face the problem of a vacant presidency. Their fear of being unable to contain the differences is what likely makes them resort to silence.