Is Barzani Assuming Talabani's Role As Mediator in Iraq?

Kurdistan Region President Massoud Barzani has taken up the roles of both broker and mediator in Iraqi politics given Iraqi President Jalal Talabani's absence, in the midst of a tense situation in the country, writes Abdel Hamid Zebari. 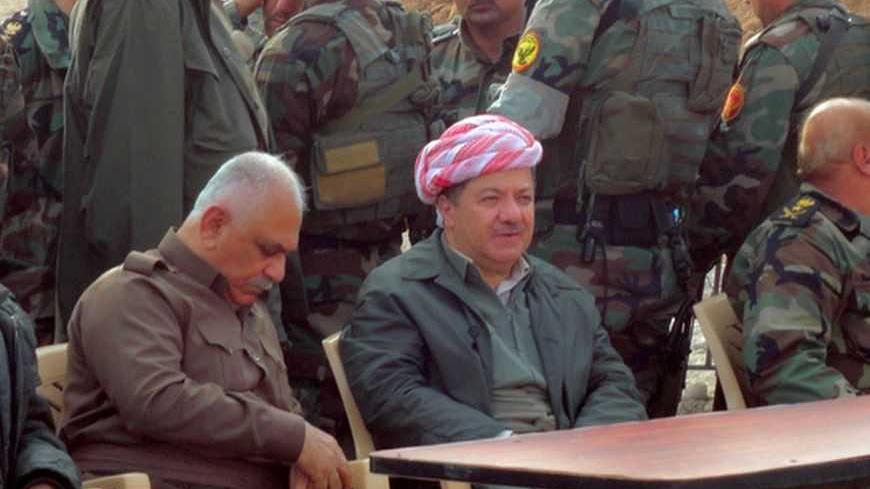 Despite lingering and tense disputes with Iraqi Prime Minister Nouri Al-Maliki over the Iraqi budget and the oil law, Kurdistan Region President Masoud Barzani is increasingly perceived as taking up the mantle of mediator while Iraqi President Jalal Talabani remains outside Iraq because of health issues.

Following Barzani's return from his European tour at the end of last week, a series of meetings has been held in the region between Kurdish factions under Barzani’s supervision and Iraqi parties who have visited him in the last few days.

Barzani's European tour lasted for more than a week, during which he participated in the World Economic Forum in Davos, Switzerland and visited Germany and Northern Ireland.

Upon his return, he oversaw the meeting between the political offices of his party and the Patriotic Union of Kurdistan, headed by Iraqi President Jalal Talabani. He then welcomed a delegation from the Sadrist Movement and another from the American Embassy in Baghdad. Some sources also indicated that he welcomed a delegation from the national coalition, of which al-Maliki is a member. Barzani ended his week by overseeing a meeting for Kurdish parties.

All the meetings and reunions were centered on the current Iraqi political crisis, the protests in the Sunni regions and how to pull the country out of the general political problems from which it suffers.

The data collected by the Iraqi Kurdistan Region presidency show that Barzani is playing a key role in the political process in the country, especially with the absence of Talabani from the political scene due to health complications.

All the information issued by the region’s presidency regarding these meetings indicates that Barzani promised to keep up the efforts to calm the situation and join all the parties together to reach a unanimous agreement to end the tensions in the country. Consequently, Iraq would move into a new phase through persistent steps to build the main sectors in the country and banish all concerns and worries.

Barzani has played an important role in resolving political crises in the country's past. Following the 2010 elections, the Erbil agreement was signed and led to the formation of the current Iraqi government, which had been delayed for more than 10 months at the time.

Iraq witnessed a major political crisis after the 2010 elections, when Maliki’s national coalition list, winning 89 parliamentary seats, and Iyad Alawi’s Iraqiyya list, which obtained 91 seats, were both fighting for the right to form the government.

The Iraqi constitution stipulates that the parliamentary majority should form the government. However, the growing conflict between Baghdad and Erbil has caused tension between Barzani and Maliki. Several issues and unsettled problems are disputed between both men, including Article 140 of the constitution, which deals with Kirkuk and the disputed regions; the privileges of the current government in Kurdistan region; the oil contracts signed by the region’s government with foreign companies, which are unrecognized by the Iraqi government and the Kurdish Peshmerga’s budget. Ever since, Talabani has had to play the role of peacemaker.

Talabani's latest health complications have not helped him to lead the national dialogue, for which he had lately been preparing, especially after Maliki brought the Tigris Operations Command to Kirkuk and was faced with Kurdish military mobilization.

Adnan al-Mufti, a prominent leader in Talabani’s party and the former president of the Iraqi Kurdistan Region, believes that Talabani’s absence has affected the Iraqi political scene, and that the political parties cannot search for solutions in his absence.

Mufti told Al-Monitor, “I think that Talabani’s absence from the political scene has affected the country, not because of his role as president, but due to his character and history. He is a person respected by everyone, and his absence creates a gap and leads to a crisis. If he were present, he would have joined everyone together and led them on the right path."

He added, "With Talabani’s absence, the political forces must take the initiative to shield the Iraqi people from subsequent harm.”

Kurdish political analyst Basharat Zangana agreed with this and said, “The absence of President Talabani has left a huge void in the political process.”

Zangana believes that “Barzani can play a key role in drawing the different viewpoints closer, and the political action in the region is headed in the same direction.”