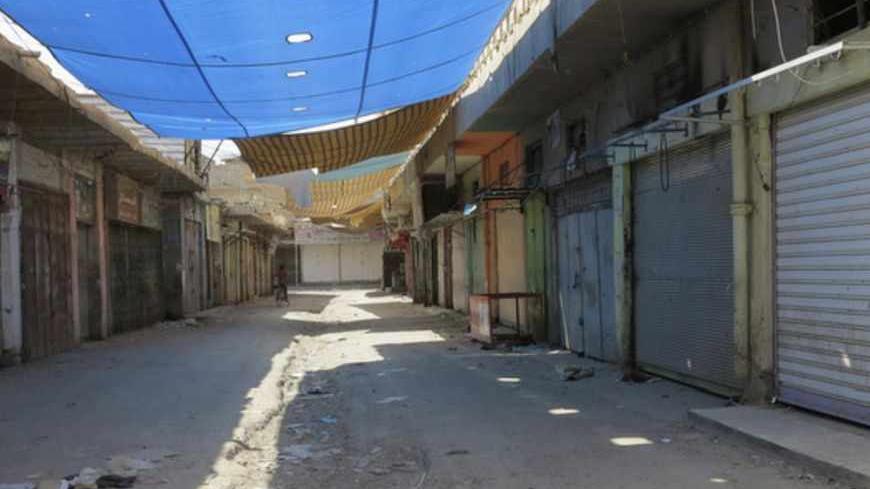 The residents of Anbar in the west and Ninevah in the northwest — the major strongholds of Sunnis in Iraq — have been practicing civil disobedience since midnight Sunday, April 21, to protest Shiite Prime Minister Nouri al-Maliki's describing them as “insurgents.” The preachers from mosques in the Sunni areas of the Iraqi capital Baghdad and in Diyala province have called on residents to fast from dawn until dusk throughout the duration of the civil disobedience.

Al-Monitor’s reporter noted that Ramadi, the capital of Anbar, was a ghostly city during the early hours of the morning. Not a passerby was seen in the streets, shops were all closed and only key officials reported to governmental institutions. Eyewitnesses have confirmed that in the city of Mosul, the capital of Ninevah, the daily activity of residents nearly ceased, while the markets and shops were closed.

Iyad al-Nayif, the spokesman for what is known as “the coordinating councils for the popular movement in Anbar” said to Al-Monitor that “95% of public and private assets were frozen in Ramadi, Fallujah, Hit, Hadith and al-Qaim in Anbar province as part of the civil disobedience that started on Monday.”

"The employees of the governmental health institutions are the only ones who were asked by the organizers of the civil disobedience to go to work,” he added.

Nayif believes that “the use of the word ‘insurgents’ by Maliki has sabotaged the pacification efforts of many parties. The organizers of the civil disobedience decided to carry on with the action for one more day. Yet it could be further prolonged; no one knows anything for sure.”

Maliki said last week during an electoral speech in Nasiriyah that “the government has asked the protesters and their leaders to come to a concord on the basis of the constitution and national unity, yet they are raising sectarian slogans and threatening with force.

“We have been patient with them because they are brothers to us. They have to know, however, that if push comes to shove and wisdom stops paying off with these insurgents, we will adopt different measures and the Iraqi people will soon have a say,” said Maliki, asking his political partners not to “stand by the side of these criminals who are threatening the political process.”

Bayan al-Bakri, a member of an intellectual group in Anbar — one of the groups gathered in the sit-in — said that this “one-day civil obedience could be followed by a broader action should the government insist on ignoring the demands of protesters.” He continued, “The sit-in was not planned as a reaction to the word 'insurgents' Maliki used to describe us. Yet Maliki’s statements have expedited the execution.”

Speaking to Al-Monitor, Bakri added that “the message the protesters wished to send through this sit-in was to contradict the belief that the protests represent a minority of Anbar’s residents.” Bakri believes that the response of the residents to the civil disobedience is the clearest reply, saying, “They have to know that we have the final word in Anbar, not the provincial council or the government,” he added.

Bakri noted that “the state employees did not fear the official threat; they boycotted their institutions even though they risked not getting paid.”

The cabinet warned the state employees Saturday in Anbar not to respond to the civil disobedience.

“We thought that the government would cancel the decision to postpone elections in Anbar. The city kept its preparations up two days prior to the elections. Maliki did not listen. The provincial council lost its legitimacy on April 20, 2013, the date that was set for elections. That’s why it does not represent us anymore,” Bakri explained.

In mid-March, the Iraqi government decided to postpone the provincial elections in the provinces of Anbar and Ninevah for six months, under the pretext of an unstable security situation.

Sarmad al-Taki, an Iraqi writer and journalist, believes that the “civil disobedience in Anbar has blown a hole in the plan of Maliki to drag protesters into violence.”

Taki told Al-Monitor that “Anbar is protesting in a modern way, despite being a rural, tribal environment. This is an action that would become a model followed in different Shiite regions of Iraq. Maliki ordered, few days ago, the military forces to engulf the protest squares and cut off food and water, which is a very dangerous sign. Maliki seems to be trying to test the power of the military in quelling protests that he might be facing in Shiite regions as a result of his improper policies.”

Taki continues, “I came back from Anbar few days ago, after spending 72 hours in the protest square. I made certain there that the chances of a civil war were slim unless external interventions take place or the government acts impetuously. I visited a photograph exhibition where I read quotations from the era of the Arab renaissance. I talked to young people and discovered that they were virtual friends with me on Facebook and Twitter. They are modern, multilingual youth who speak rationally.”

Taki believes that “these are the politicians of the future; they are the safety net that keep the country away from violence.”

The Maliki givernment has been facing protests for months in many Sunni provinces and area. The protesters are demanding and end to violations against detainees, the release of innocents, the annulment of the counter-terrorism law, the enacting of an amnesty law, a change to the political process, an end to marginalization and balance within state institutions.