Iran's Man in Iraq and Syria

Iranian Quds Forces leader Qasem Soleimani, who played a central role in post-2003 Iraq, has taken a different slant in his approach to the Syrian conflict, writes Mushreq Abbas. 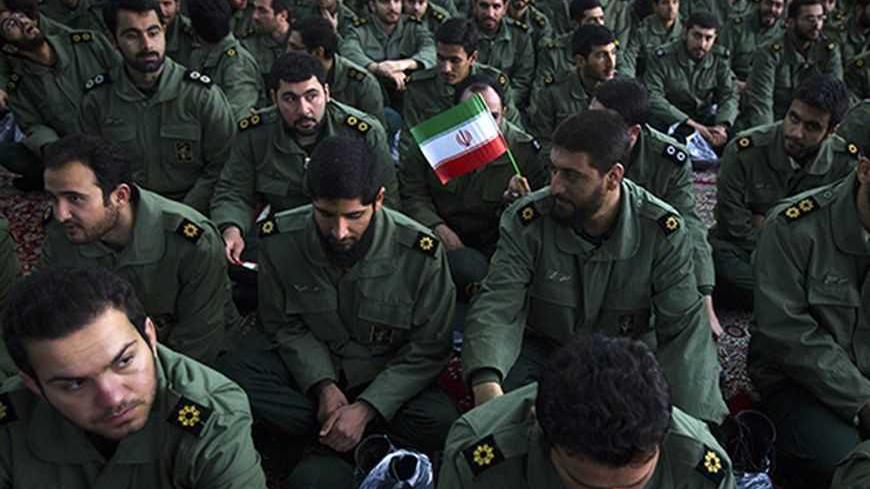 Members of the revolutionary guard attend the anniversary ceremony of Iran's Islamic Revolution at the Khomeini shrine in the Behesht Zahra cemetery, south of Tehran, February 1, 2012. - REUTERS/Raheb Homavandi

It came as no surprise when Riad Hijab, the former Syrian prime minister who defected from the Assad regime, revealed in February that Qasem Soleimani, commander of the Quds Force — a division of the Iranian Revolutionary Guard — was managing the conflict in Syria in favor of the regime, particularly given that as far as the Syrian crisis is concerned, Iran has had the most obvious stance.

Nevertheless, calling attention to Soleimani, who has made headlines in the media and within international intelligence circles following the role he played in Iraq throughout the last decade, on a basic level seeks to imply an Iranian military and intelligence role in Syria.

However, Soleimani’s performance seems drastically different from what was seen in Iraq during the past ten years, even though deciding on Soleimani to fulfill this task emanates from two unshakable facts:

First, Soleimani has succeeded in preserving Iranian interests in Iraq over the last decade.

Second, the Syrian and Iraqi crises are inevitably intertwined; therefore, the same Iranian figure must manage the conflicts in both countries.

Last September, Maj. Gen. Mohamed Ali Jafari, commander of the Iranian Revolutionary Guard, admitted that members of the Quds Force were serving in Syria and Lebanon as “consultants.”

Pro-Iran Iraqis discuss the consulting role Iran had played in Syria until last October, when Soleimani directly took charge of the 70,000 best Syrian fighters, in addition to 2,500 from Hezbollah and 800 Iraqis, most of whom have lived in Syria since the 1980s.

The Free Syrian Army, however, denies these claims and, according to its statements and speeches, believes that thousands of Iranian fighters, in addition to many coming from Iraq and Lebanon, are fighting in Syria.

Post-2003 Iraq radically differs from today’s Syria. Thus, Soleimani’s extensive experience in the former has not paid off in the latter.

Soleimani’s first successful mission, following the American invasion of Iraq, was to simultaneously open communication with Sunni political and tribal groups on the one hand, and with Kurdish and Shiite groups on the other.

The strategy Iran had adopted in Iraq is starkly different from that currently followed in Syria:

The balance in both countries is different. Therefore,  Soleimani’s mission must adapt. Informed sources have declared that Soleimani tried to open the channels of communication with the Syrian opposition in order to reach a settlement that protects the Iranian interests in post-Assad Syria.

Speaking of the equation, a prominent Iraqi official, who met with Soleimani months ago, said that “the mission of Soleimani in Syria is complicated. It is not limited to protecting the regime from collapsing, rather it also has to preserve Iranian interests in Lebanon and Syria should the regime fall.”

“Iran has clearly understood the developments in Sunni Iraq since 2011 and that calls for the establishment of a Sunni region are nothing but a message sent from regional powers supporting the Syrian opposition, such as Turkey, Saudi Arabia and Qatar. This underlines the readiness to flare up the Iraqi front in the face of the upcoming challenges,” he added.

These regional skirmishes have left their mark on Syria and Iraq. On the one hand, Soleimani is struggling to maintain his country’s ability to negotiate Syria’s future by helping the Syrian regime stand its ground. On the other hand, Iraqi Sunni figures are fighting to make the Sunni region a reality, altering the course of the conflict in the region and undermining the depth of the Iranian strategy in Iraq, Syria, Lebanon and Palestine.

Soleimani is paving the way for a period of negotiations in Syria that might not be very different from the indirect negotiations revealed in the book The Endgame: The Inside Story of the Struggle for Iraq, from George W. Bush to Barack Obama by Michael R. Gordon and retired General Bernard E. Trainor.

The book describes General David Petraeus's recognition of Soleimani’s influential role. Writing on the exchange of information between the two Generals, the authors note that "Petraeus responded to the messages through the intermediaries that brought them.”

The book also quotes American officials saying that General Soleimani "was  familiar to every senior Iraqi politician and official" and was responsible for, "the training and equipping of Shiite militias."

Although Tehran has held several conferences in Iran under the slogan of “dialogue” to try to draw the visions of internal and external Syrian opposition parties closer, it did not succeed in convincing the main armed forces in Syria, especially the Free Syrian Army and the active political forces like the National Coalition and the National Council, to look to Iran as part of the solution to the crisis.

What’s more is that these forces refused Tehran’s other alternative that consists of Iraq being a mediator in the dialogue. The Syrian opposition forces backed by the regional and international parties in favor of changing the regime have always seen Iraq as the backyard of Iranian politics, although Iraq has constantly reiterated its impartiality vis-à-vis the crisis. The country never wanted to get dragged into the Syrian turmoil. It launched several initiatives and called on the Syrian opposition to visit Baghdad, to little avail.

As a result, Soleimani’s success in Iraq was a temporary field matter that lasted for a certain period of time. Baghdad’s inability to play the role of mediator in the Syrian crisis or in Iraq’s nuclear case is not considered a success for the Iranian strategy in Iraq.

Moreover, Iraq’s inability to establish a strong and stable regime that is far from the threats of division and influence of foreign crises might result from Soleimani’s efforts in the country between 2003 and 2008, as stated in Gordon’s book. In fact, the strategic calculations do not consider it a far-fetched goal. It seems that Iran changed its mind about the “weak disputed Iraq,” when it pressured Kurdish, Shiite and Sunni forces to support current Iraqi Prime Minister Nouri al-Maliki as a strong ruler, who is capable of setting the stage for regionally and internationally recognized stable rule.

Soleimani won the battle in Iraq, but the divided country is no longer capable of effectively helping Iran in its regional and international conflicts.

Yet, Soleimani has different cards to play in Syria. The loopholes in the Iraqi crisis are not present in the Syrian one, and Soleimani cannot find allies to take the lead and switch roles — a strategy that Bashar Assad’s regime was successfully implementing in Iraq.

On Feb. 16, a prominent cleric in Iran, Mahdi Taeb, stated, “If we lose Syria, we will not be able to keep Tehran, But, if we lose Ahvaz, Khuzestan, we will get it back as long as we have Syria.”

This vision, non-strategic as it is, might justify the risk that Iran took in Syria, in addition to Soleimani’s efforts. Iran’s failure in Syria will bring about a failure in Iraq specifically, since Iraq now is incapable of fulfilling the Syrian role of 2003-2011. Consequently, it cannot offer much to the Iranian strategy in the region.

Therefore, Soleimani’s success in Syria is closely linked to his success in Iraq in the coming period. Will he support an Iraq that is more united and apathetic about the foreign crises? Will he support the division of Iraq in return for a regional settlement? Will he involve Iran in a possible civil war on the Iraqi territories that expands to Syria and around the region? Or, will he prefer a Syrian settlement with results that do not involve Iraq?