As Sunni demonstrations and sectarian tensions throughout Iraq continue to escalate, al-Qaeda is focusing all its efforts on taking advantage of Sunni vulnerabilities, writes Mushreq Abbas. 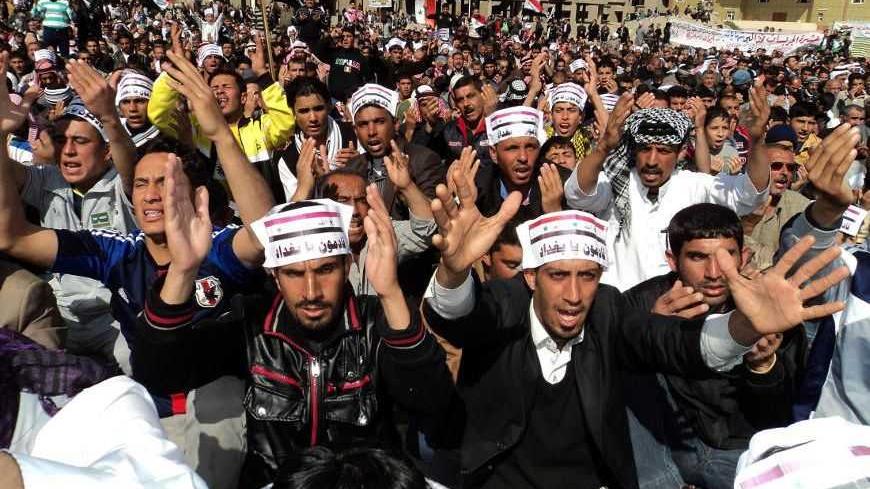 Al-Qaeda is one or two steps ahead of Iraqi security efforts. This is a reality to which even security personnel will admit. The fact is, Iraqi security is gradually starting to abandon its traditional approach to limit the dangers posed by the organization, its expansion and extensive planning capabilities.

But Iraq's timid confession of its inability to read al-Qaeda’s thought process and predict its next move and goals has yet to develop into a clear and studied vision that goes beyond beefing up its military presence in the streets, carrying out arbitrary arrests and relying on an unprofessional intelligence body.

The "secret formula" given by former US president George W. Bush in late 2006 to undermine al-Qaeda relied on two key elements. The first was to attract local Sunnis opposed to al-Qaeda, including militant groups that had taken up arms against the US military in the past. The second involved establishing an expansive system of information sources in areas where the organization is expected to be found.

The “Bush plan” even included striking at Shiite militias spread throughout southern Iraq at the time. This did not involve setting up counter-militias similar to the al-Sahwa organization, but rather was to be accomplished through the use of Shiite-dominated Iraqi military forces. US forces realized at the time the difficulties of striking a sectarian and ethnic balance within these groups.

Nearly six years later and after the Iraqi government abandoned the "Bush Plan" — through abandoning the al-Sahwa militia and the US army's information network, which included about 100,000 information sources — we come to understand why Baghdad was hit by 14 car bombs in one day last week, on Feb. 17, despite security forces having closed all entrances into the city only a few days earlier.

Remarkably, the recent bombings in Baghdad were all carried out without al-Qaeda resorting to suicide bombers. The truth is, suicide bombers are used when it is not possible to strike at a target without explosives. Al-Qaeda uses suicide bombers to target government institutions, prisons or security headquarters — as was the case in mid-January of this year in Kirkuk. It uses remotely triggered bombs, however, when targeting markets or gatherings without a significant security presence.

This observation is crucial in understanding the way al-Qaeda thinks, and thus in predicting its future objectives. On one hand, when al-Qaeda chooses easy targets such as markets and places full of workers or students, this reveals the political and media objectives of proving its relevance and presence. On the other, the organization is stoking the flames of sectarian tensions currently plaguing the country in order to re-establish the conditions that allowed the outbreak of the civil war in 2006.

Tracking al-Qaeda attacks grants specialists insight into the organization’s leaders thinking throughout each of the following five periods:

The first period (2003-2004) involved calls to resist the US occupation and raise patriotic slogans. Al-Qaeda attacks during this time were focused on this objective. The organization ramped up its presence in western and northern Iraq and Baghdad to garner the largest following possible. This is what is referred to as "empowerment" in Salafist literature.

During the second period (2005-2006), the organization moved to exerting its control on the ground after having secured a large number of Arabs willing to carry out suicide attacks. The battle of Fallujah (2005) helped to promote its image as a defender of Iraq's Sunnis. Since that time, it has begun to carry out major offensives against Shiite targets, paving the way for the attack on Al-Askari Mosque (a sacred Shiite shrine) in Samarra and the outbreak of the civil war.

The third period (2007-2008) is considered the most dangerous stage of the group’s operations. The group moved from traditional tactics (bombings, rockets, confrontations, occupation of land and declaring the Islamic State of Iraq) to more complex maneuvers necessitated by the new conditions under the Bush plan. This was after Iraqi Sunnis turned against the group, expelling al-Qaeda from its most important strongholds in Anbar.

At this period, al-Qaeda decided to implement secret operations and a pyramid structure, and to develop sleeper cells in Shiite cities, away from security pressure. It was on these grounds that generations were brought up to deal with the new security conditions, and to adapt to the breakdown of the armed operation in favor of an increased presence of the Iraqi security forces working in tandem with the US to interpret the group’s intentions.

The fourth period (2009-2010) required al-Qaeda to carry out multiple major operations simultaneously, to target prominent figures of the state and its institutions and to pave the way for controlling these institutions if the US forces withdrew. To this end, local women, children, men and even the mentally handicapped were used as suicide bombers. During this time, the group shifted toward assassinations using silenced weapons on targets that were known in advance.

The fifth period (2011-2012) was a real test of the group’s strategy of planting sleeper cells in the Shiite areas. For the first time, al-Qaeda suicide bombers targeted military institutions and Shiite pilgrims in southern Iraq. This suggests that the group was moving its operations to new areas that Iraqi security forces would not be able to predict.

Until the Sunni protests erupted late last year, Iraq’s approach to combating al-Qaeda focused on military and security strategy. Arrests, the blockade of cities, restrictions on people’s lives and the militarization of society by deploying hundreds of thousands of militants in the streets are the only resources available to the state to confront a group that is constantly developing its mechanisms, movements and methods of infiltration, and constantly adapts to new security conditions.

The clearest flaw to the state's strategy, however, was not promoting moderation in the Sunni circles as a weapon in the war. It did not care much about confronting al-Qaeda with reconciliation, tolerance and resolution of social and political crises. It was not concerned with economically developing areas in which the group might emerge. Nor did it protect and support traditional enemies of the group, such as tribal leaders, clerics and former leaders of armed groups in the Sunni areas.

In the absence of a legitimate Iraqi justice system — alongside the increasing complaints by Iraqi Sunnis of being marginalized and humiliated — the eruption of demonstrations has been a very dangerous event, and al-Qaeda will exploit the Sunni turmoil to its advantage.

It is hard to believe that the group, whose ideology is founded on the belief that Shiites are "infidels" and that killing them is permissible, will maintain a neutral stance toward these demonstrations. They represent a golden opportunity for al-Qaeda to regain militants, clerics and tribesmen lost under the Bush plan.

Striking at popular Shiite targets is not a new part of al-Qaeda’s mission, but it will be its main priority for the coming period. The group will work to promote itself as the defender of Sunnis and will go to great lengths to make demonstrations devolve into armed confrontation and a new civil war. It will certainly support the various calls for the separation of Iraqi Sunnis in line with the dynamics of the Syrian revolution, which al-Qaeda regards as a Sunni war.

The Iraqi government has allowed demonstrators to gradually raise their voices without working seriously to address the reasons the protests broke out in the first place. The government hopes to utilize sectarian rhetoric — employed by some of those participating in the demonstrations — to strengthen the government’s position among Shiites.

Yet this policy is extremely dangerous, as it deals recklessly with the very real and disastrous possibility of allowing al-Qaeda to regain favor among the Sunnis that it had previously lost.

The good news is that enmity toward al-Qaeda is still high in Sunni areas, and the demonstrations’ rhetoric condemns al-Qaeda’s actions in general, while focusing on national unity and the desire for coexistence between all segments of Iraqi society. The bad news, however, is that the Iraqi authorities, which could not previously understand al-Qaeda as well as they should, failed to win the support of Arab Sunnis at the right moment. For these reasons, it seems the authorities are examining how to address social, legal and political imbalances in order to prevent al-Qaeda from hijacking the Sunni areas once again.