Jihadists in Syria Can Be Found On the Internet

Jihadists fighting in the Syrian conflict may be hard to meet, but they maintain an increasing online presence, writes Aaron Zelin, a research fellow at the Washington Institute. The numbers of cyber warriors are growing among the opposition. 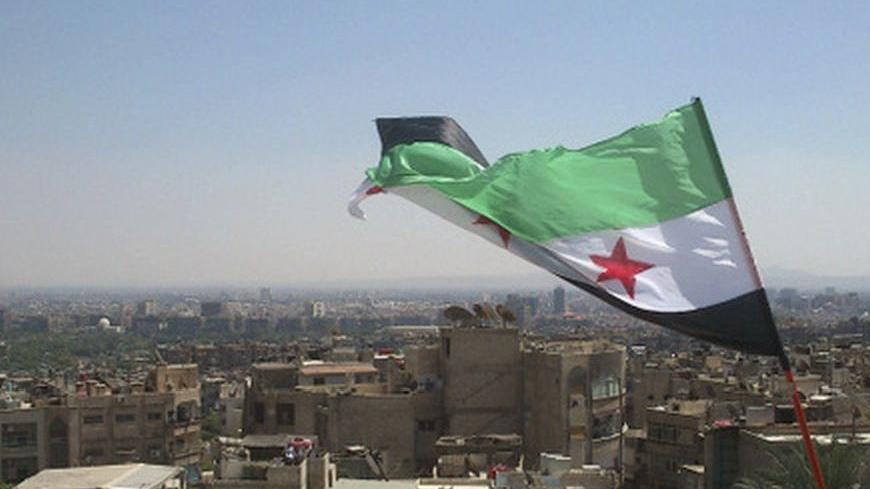 An opposition flag is seen over neighborhood Ruknuddin in Damascus on Aug. 5, 2012. - REUTERS/Shaam News Network/Handout
October 19, 2012

Unlike other actors in the current Syrian conflict, gaining access to Jihadists is fraught with security concerns on all sides.

Broadly, a “Jihadist” is a Sunni Muslim pan-Islamist who subscribes to a worldview that taking part in a violent, military holy war, or Jihad, in the name of Islam is the best means for bringing about the end to "apostate" regimes. The Jihadists then aim to replace these governments with ones that administer Islamic Shariah law based on their interpretation. While Jihadists have been most associated with al-Qaeda over the past decade, not all Jihadists are al-Qaeda and not all Jihadists agree with its global focus even if there is some ideological overlap.

For journalists and researchers, there is hesitation about coming into contact with Jihadists, due to the potential of kidnap or even execution. For Jihadists, concerns over operational security and the potential for infiltration and espionage has loomed large when meeting unknown outsiders.

But there is another way to understand them, and gain access to the Jihadist mindset, conversations and ideology: the Internet. Jihadists provide extensive information about themselves in online forums, on websites and social media platforms — information that can be used to better understand their ideological debates as well as the activities they are conducting on the ground.

The Syrian case is no different. The changes in focus and messaging over time helps one better understand how Jihadists entered the conflict and how far they have come in the past 19 months.

When the uprising in Syria first broke out in March 2011, like in other countries that saw outbreaks of peaceful protests in the region, Jihadists, most specifically al-Qaeda, were flatfooted in their response. Al-Qaeda in Pakistan did not even put out a country-specific statement or video on Syria until February 2012. Other Jihadist scholars who are not associated with al-Qaeda as well as organizations such as Fatah al-Islam and the Abdullah Azzam Brigades, both Lebanese-based organizations, did provide commentary, though. In the beginning many gave shout-outs to “proud Syria” for shaking off the yoke of fear from the Assad regime.

Later in the spring, grassroots Jihadists began asking Jihadist scholars for fatwas on the permissibility of joining the protest movement. The Mauritanian Shaykh Abu al-Mundhir al-Shinqiti, who is the most influential Jihadist scholar that is not imprisoned or dead, argued that it was acceptable to join the protests, but cautioned that Jihadists should not join in nationalist or secular chants, but rather "Sharia’ah-compliant" ones like “Allahu Akbar.” Al-Shinqiti also noted that it was OK to engage in violent protest if provoked by the regime.

As the protest movement in Syria began to be supplemented by the creation of the Free Syrian Army (FSA), which originated as a loose network of brigades and battalions of defecting soldiers from the Assad military, Jihadists started mulling whether they should join the armed fight, too. One started to see calls by ideologues such as Dr. Akram Hijazi, a Jordanian jihadi blogger, Abu Mariyya al-Shami, an online jihadi essayist, and the Abdullah Azzam Brigades to prepare for war against the regime.

There was also a sharp debate between al-Shinqiti and Shaykh Abu Basir al-Tartusi, an exiled Syrian in London who returned to Syria to join the rebellion, on whether it was legitimate to join the FSA. Al-Tartusi came down on the side of "yes," while al-Shinqiti disagreed, arguing that the FSA followed a “democratic method,” which is contrary to his interpretation of the Shariah. At this juncture, in the fall and early winter of 2011, the presence of Jihadists in Syria was still not visible.

There were two key signs that Jihadists began to penetrate the rebellion in January and February of this year. First, on Jan. 24, al-Manarah al-Bayda’ Media announced the creation of a new Jihadist organization in Syria called Jabhat al-Nusrah (The Victory Front), which is led by Abu Muhammad al-Jawlani (al-Golani). A few weeks later, on Feb. 17, a member of the Shamukh al-Islam forum, the premiere Jihadist forum, posted a thread noting the death of a Kuwaiti. This was the first sign that foreign fighters started trickling into the conflict. It should be noted, though, that not all foreign fighters involved in the conflict are Jihadists.

At first, some postulated that Jabhat al-Nusrah (JN) was a false flag operation due to Assad’s past as having manipulated Jihadists during the Iraq war and later the Lebanese Fatah al-Islam. This was not the case in this instance, though, because well respected Jihadist ideologues, starting in March, like al-Shinqiti, Shaykh Abu Sa'd al-‘Amili, a prominent online essayist, Shaykh Abu Muhammad al-Tahawi, a prominent Jordanian Salafi, and Shaykh Abu al-Zahra' al-Zubaydi, a popular Lebanese Jihadist, promoted JN as "the" Jihadist group to join or help finance.

In the late spring, the activity level of JN attacks began to pick up. Since JN was established, it has reported conducting more than 220 attacks including suicide bombings, improvised explosive devices, assassinations, summary executions, raiding buildings, and attacking checkpoints. The majority of the attacks have occurred in the past three months, though. All of their attacks have focused on hitting the regime and its allies and not civilians. This would suggest that they have learned the lessons of Iraq.

Another lesson is JN’s focus on the Syrian nature of the group. All but one (a Moroccan) of the "martyrdom wills" they have produced has showcased Syrians. This differs from Iraq, where a large portion of the fighters associated with Abu Mus’ab al-Zarqawi, original leader of al-Qaeda in Iraq, were non-Iraqi. While this centrality of Syrians is the case on the official level, forum notices of new "martyrdoms" have highlighted foreigners that have fought with JN. It is likely that most of JN’s fighters are Syrian.

The late spring was also the time where more foreign fighters started to join the fight. The majority are from the countries surrounding Syria: Lebanon, Jordan and Iraq. There is also a smaller contingent from Libya and Tunisia. A number of Westerners have also decided to join up. Based on estimates from a wide range of sources in multiple languages (for example: Der Spiegel, The Daily Star, El Pais, al-Quds al-Arabi, and a Jihadist blog, among more than a hundred other sources), there are currently 1,100-2,700 foreign fighters in Syria. It is likely that the true figure is closer to the lower end. Foreign fighters include: "tourists" or individuals riding the wave of the Arab uprisings, "tribal" individuals that have cross-border familial ties, and "Jihadists." There is no figure about what percentage each category makes up amongst the foreign fighters. There are allegedly upward of 100,000 soldiers affiliated with the Free Syrian Army, illustrating that foreign fighters make up a very small portion of the entire fighting force.

What to Look For Going Forward

There are signs that JN has begun to consolidate its capabilities. The speed of releases from the time of attack to posting online has gotten a lot quicker in recent weeks. Previously it would take at least a week or two between an attack occurring and a statement being produced. Now it takes as little as less than 12 hours. This could illustrate that there is a lot more coordination and command and control between the military and media committees.

It should be pointed out, though, that JN is still at the margins of the rebellion and recent events suggest that individuals associated with the FSA believe the Jihadists have tarnished their cause. Intra-rebel fighting between the mainstream opposition and the Jihadists is likely to pick up once the Assad regime falls. The longer the conflict goes on, though, the prospect of further radicalization, sectarianization and foreign fighters flowing into Syria will accelerate. This will likely complicate the post-Assad transition.

There are four questions that could provide more insights into the future trajectory of JN and the other Jihadists if they are answered: 1) Will JN or al-Qaeda in Pakistan mention one another? This still has yet to happen. 2) Will al-Qaeda in Iraq announce itself in an official capacity in Syria? Only members in individual capacities have joined thus far. 3) Will Jihadists attempt to provide governance or social services? Will they follow the model of al-Qaeda in the Arabian Peninsula in southern Yemen? 4) Will Jihadists only focus on Syria post-Assad, help out their Lebanese brothers in their fight against Hezbullah, or turn their weapons toward their ultimate prize: Israel.

At the very least, following pronouncements from groups and ideologues on Jihadist forums, websites, and social media platforms will help provide a window into an otherwise murky world. The past 19 months have shown us that while Jihadists were slow to grasp the monumental shifts in Syria and the region generally, they have since adjusted and looked for avenues to exploit the changing contexts to their advantage.

Aaron Y. Zelin is the Richard Borow Fellow at the Washington Institute for Near East Policy where his research focuses on how Jihadist groups are adjusting to the new political environment in the era of Arab uprisings and Salafi politics in countries transitioning to democracy. He also independently maintains Jihadology.net, a clearinghouse for Jihadist primary source material. Follow him on Twitter @azelin.