Avigdor Liberman has resigned immediately from his post as foreign minister — a plan which, writes Ben Caspit, may return him to the head of a new Israeli government in March 2013. 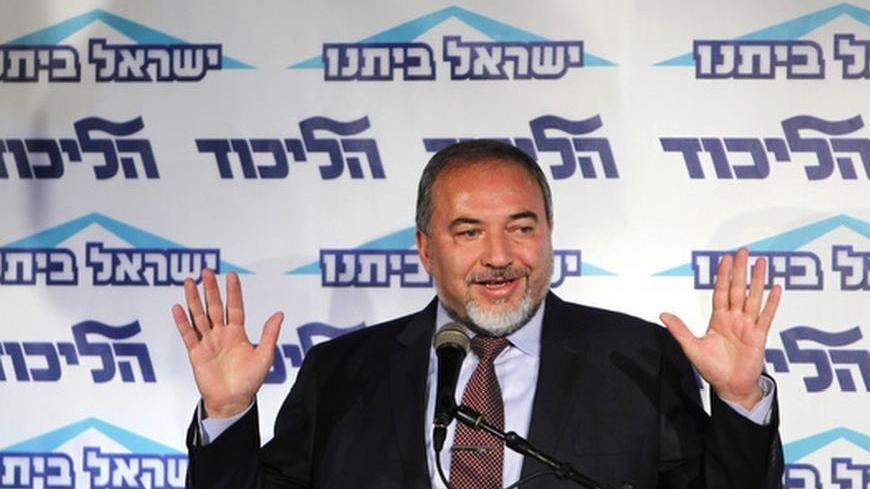 Israeli Foreign Minister Avigdor Lieberman gestures as he speaks at a conference for young members of his Yisrael Beiteinu party in Tel Aviv December 13, 2012. - REUTERS/Amir Cohen

Avigdor Liberman's decision to resign immediately from his post as foreign minister is the outcome of a basic risk-management policy.

On Friday morning, Liberman convened his top-notch lawyers to receive a learned and up-to-date assessment, which consisted of two parts. The first one contended with the chances of his conviction in the ambassador affair. The second one addressed the chances of the petition filed against him with the Supreme Court with the demand that he resign from the government upon arraignment.

This is what Liberman's lawyers told him: If you're going to trial, you'll be acquitted. Not 90%, not 99%, but 100%. Headed by attorneys Jacob Weinroth and Giora Aderet, the legal team gave Liberman a convincing presentation to the effect that there was no danger whatsoever that he would be convicted. Incidentally, even in the event of conviction, they were utterly convinced that the punishment would be light and without "moral turpitude" allowing him therefore to return summarily to the political arena.

As for the Supreme Court, which was petitioned by the Meretz movement, the attorneys had a different assessment. In this case, anything's possible. All options are on the table; it's a tossup. Some legal opinions maintained that Liberman could keep his job. Other assessments — as well as a few precedent rulings (such as the cases of Minister Arieh Deri and Deputy Minister Rafael Pinhasi, who were forced to resign upon arraignment) — contended that the Supreme Court might force the minister to resign.

Liberman is a decision-making machine. He listens, he learns, he makes a decision. Unlike his partner, Prime Minister Benjamin Netanyahu, Liberman will never put off something for the next day if he can make a decision right away. Rather than being a follower and pressured, he likes to lead, call the shots and control the agenda. He realized that going to trial is a victory in the pocket, but that digging in at the Ministry of Foreign Affairs could mean humiliation. The last thing he needed was for the Supreme Court to force him to retire three weeks before the general election, allowing the centrist-left parties, chief among them his much-hated rival Labor Party chairman Shelly Yachimovich, to shoot more arrows at him. There's nothing Liberman hates more than being driven out, losing his grip over a situation or being held hostage. Upon learning that assessment, he realized instantly what he needed to do: resign immediately. And he did.

By doing so, he was able to kill two birds with one stone. Chiefly, he demonstrated reverence toward the judiciary. Lo and behold, all of a sudden Avigdor Liberman was the defender of the rule of law. He promised he would resign and he did, despite being convinced of his innocence. It could be regarded as the turning over of a new leaf with the rule of law or perhaps some kind of a Libermanesque reward to the judiciary, which, at the end of the day, dropped the real case, leaving only this negligible afterthought.

He was also ahead of the Attorney General, Yehuda Weinstein, who — according to some assessments — would have instructed Prime Minister Netanyahu to dismiss Liberman had he not recused himself. On Friday morning, Weinstein was still vacillating. Similarly to the case with the Supreme Court, no one had control over the outcome, and the chances were even. Liberman didn't want to be held hostage by either the Supreme Court or Weinstein. The intelligence he gathered in last few days suggested, with reasonable probability, that the State Attorney's office would let him conduct a speedy trial, lasting for no more than a few weeks. Once acquitted, or alternatively, allowed to hatch out a lenient plea bargain without "moral turpitude," he would be able to immediately go back to the next government, well before it is formed. And that's what he intends to do.

If Liberman's plan pans out, the Israeli foreign minister will be rebooted in the next few weeks and cleared of the affairs that have shrouded his career from day one, allowing him for the first time in his political life to stand in front of the mirror as a free man no longer under a cloud. Save for a few weeks in the middle of 1996, when he was appointed the bureau chief of the Prime Minister's Office, Liberman has not been familiar with such a situation, having never experienced it. Go figure what this bizarre feeling could prompt to him to do.

But a word of caution is called for: With all due respect to the educated legal assessments and Liberman's high-priced and seasoned attorneys, when you embark on a legal adventure, you never know how you will fare in the end. Israel is a country chock-full of surprises. You never know which judge you will be assigned, what the witnesses will say, what evidence will be pulled out of sleeves and what the next day will bring.

So for the time being, and unless otherwise proven, Liberman is a politician with a caveat, a future finance minister who comes with a warning label. If in the next few weeks he is able to pass this test with flying colors, and if the judiciary meets him halfway to expedite the proceedings, and unless earth-shattering surprises crop up, a new government in Israel will be formed in March 2013, with Avigdor Liberman possibly playing first violin or even being the Konzertmeister.

His current plan is to be appointed finance minister, not foreign or defense minister. He wants to tackle Israel's housing crisis head-on, while also seizing the portfolios of the ministries of the Interior and Housing (which will be dished out to his party members or maybe even to himself). But first and foremost, he needs to burnish his credentials. Either way, had Avigdor Liberman been asked whether he would buy the package that the attorney general had prepared for him (closing the main case and serving an indictment in the ambassador affair), he would have grabbed it with both hands.

It would have been a bargain.

Ben Caspit is a senior columnist and political analyst for Israeli papers. He has a daily radio show and regular tv shows on politics and Israel.