The Trial of Avigdor Lieberman

The outcome of the trial of former Israeli Foreign Minister Avigdor Lieberman might shake not only Israeli politics but the stability of the whole region. 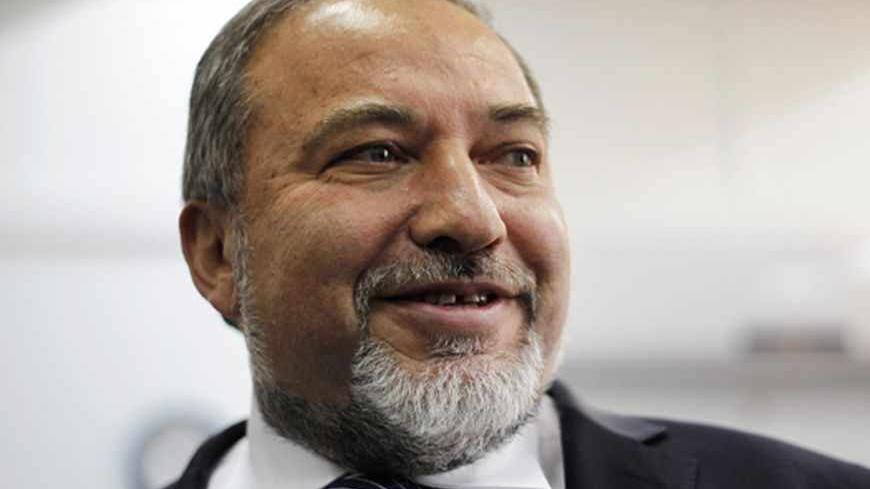 Avigdor Lieberman, former Israeli foreign minister, looks on in the courtroom before the opening hearing of his trial at Jerusalem's magistrate court, Feb. 17, 2013. - REUTERS/Ariel Schalit

It would be hard to find more fickle, erratic and unpredictable politics than Israel’s. But even by its own standards, Israeli politics, as reflected in the former Foreign Minister Avigdor Lieberman case, breaks new records of bizarreness befitting a tawdry Latin American telenovela. Yet this affair, however preposterous, carries many implications that could affect the Middle East in general and Israel in particular. And this is where it stops being funny.

Former and possibly future Foreign Minister Avigdor Lieberman appeared Wednesday [May 29] before three judges in the Jerusalem Magistrate Court and took the witness stand. Testifying for seven hours, he did not lose his composure, making jokes and sporting good humor. He did what he does so well. His testimony will continue at the court’s next session after which the “defense will rest.” Then, the judges will retire to their chambers and later this summer seal Lieberman’s fate and possibly that of his party, Yisrael Beitenu. They may even seal the fate of the succession battle in the post-[Prime Minister Benjamin] Netanyahu Likud party, and possibly the diplomatic process and the ever-so-high chances of conflagration in the Middle East. There’s Lieberman for you. He has his finger in every pie.

Let’s start at the beginning. For some 20 years, Israeli law enforcement agencies and the state prosecution have had Lieberman in their crosshairs. The new immigrant’s heavy accent, manicured beard and terrifying looks did not go well with the police and the State Attorney’s Office. Investigations were launched and closed; cases cropped up and faded away. In the end, the police, and subsequently the state attorney, zeroed in on an international mega-million shekel kickback affair that spawned many tentacles until it became a sizzling hot potato that was placed on the desk of Attorney General Yehuda Weinstein. This is where our story takes a dramatic and bizarre turn. Vacillating, consulting, deliberating, regretting, coming back to his senses and taking endless time, Weinstein finally made a call and closed the case, and that was that.

Instead, he submitted an indictment against Lieberman on some small, minuscule even, affair, which is entirely surreal and could be regarded as a tragic comedy of errors, redolent (or not) of B-class crooks. This is the story about the Israeli ambassador to Belarus, Zeev Ben-Aryeh, who also hails from the former Soviet Union and is closely associated with Lieberman. The two meet in Minsk, the capital of Belarus. Lieberman is not the foreign minister at this time, only the chairman of the party. Ben-Aryeh hands him an envelope with details about a request from the Israeli State Attorney’s Office to Belarus law enforcement agencies regarding the investigation into the Lieberman case. From this point on, the versions diverge. Lieberman relates that he sneaked a quick look at the note, and realizing what it was, he tore it to pieces, threw it down the toilet and flushed. He totally ignored the incident, and a few years later, as foreign minister, he helped to promote Ben-Aryeh to another position as a Foreign Ministry ambassador. The state attorney, on the other hand, thinks there’s much more to it than meets the eye. This is an ambassador who gives Lieberman confidential information from a pending investigation with the hope of getting something in return, which is what happens a few years later, when he is appointed to another position.

The parties agree on almost all the details. The linchpin of the controversy is whether Lieberman instructed the members of the Foreign Ministry’s appointment committee to appoint Ben-Aryeh or whether he was indifferent. It is over this minor question — namely the appointment of a minor ambassador in some godforsaken place — that Lieberman’s career will either sink or soar. It is the answer to this question that people throughout most of the Middle East are waiting for with bated breath and on tenterhooks. Netanyahu, who needs Lieberman but is also afraid of him, is waiting. Also waiting are all the “princes” of the Likud party (Minister of Internal Affairs Gideon Saar, Minister of Water and Energy Silvan Shalom, Defense Minister Moshe Ya'alon, etc.). They know that if Lieberman is acquitted, he will become the new Dreyfus overnight, immeasurably increasing his chances of taking over the post-Bibi {Netanyahu] Likud party. The Israeli political establishment, one of whose brightest beacons for many years was Lieberman, is waiting. The inner defense cabinet — where Lieberman’s vote could decide major strategic issues (Lieberman has traditionally been a hard-liner, supporting a strike in Iran and more strikes against Syria) — is waiting as well. Syria, Lebanon, Iran, Egypt, Jordan, the Gulf countries, the United States and Europe are all waiting too. Almost all those who are waiting — be it across the ocean or across the border — are hoping that Lieberman will cease to exist as a political entity. Although some of them might say some surprising and completely different things behind closed doors.

Now on to the personal drama. During the investigation and the trial, most of the members of the Foreign Ministry’s appointment committee, who voted on the appointment of said ambassador, took the stand. Almost all of them sided with Lieberman’s version to the effect that he did not interfere in the process. Many of them, it should be emphasized, still work at the ministry, and it is no coincidence that Lieberman forced Netanyahu to save this position for him. When you are poised to become the “next foreign minister,” people are naturally cautious.

The prosecution lost most of its anchors among the committee members, except for one — Lieberman’s industrious former deputy, Danny Ayalon. This is where the saga, which is reminiscent of the classic movie “High Noon,” started to unfold. Ayalon was brought into politics by Lieberman who also anointed him as his deputy foreign minister. At the end of last year, prior to the elections, Lieberman abruptly told Ayalon that he had been excluded from the Yisrael Beitenu party Knesset slate. Ayalon was given the boot in one Liebermanesque fell swoop. Shortly thereafter, it turned out that Lieberman was being arraigned in the case of the ambassador, and that Danny Ayalon was a material figure. In this regard, Lieberman has only himself to blame. What was so urgent about getting rid of Ayalon, he must be wondering at this time. Now the former deputy is seeking revenge. Even though before being drummed out he fully supported Lieberman and never said a word about the ambassador affair, it is after his impeachment that he became the paragon of the pursuit of justice, finding himself as the prosecution’s key witness against his former boss.

The two have been exchanging blows for the past several weeks, on and off the witness stand. When Ayalon concluded his testimony against Lieberman, Lieberman was asked by reporters whether he would agree to shake his hand, Lieberman interjected to the microphones that Ayalon could forget about that. I don't shake hands with liars. What’s left is for the judges to decide whom they believe, Ayalon or Lieberman. The former minister or the impeached deputy. It’s one man’s word against that of another. Surrounded by a battery of some of Israel’s highest-priced attorneys, Lieberman sports stoic equanimity and composure. But don’t be confused. Those well-acquainted with him know that even if al-Qaeda militants were to drag him by his beard to the scaffold, he would still keep his cool and remain collected. His fate is hanging by a thread, and he knows that full well.

There are a couple of possible scenarios. An acquittal — and he becomes the new Dreyfus, although the attorney general said from the start that he would appeal and go all the way with this case. A minor conviction, without moral turpitude or a three-month (or more) prison term, and he will have to resign from this Knesset but be eligible to return to politics after the next elections, which is exactly what happened with Knesset member Tzachi Hanegbi. If this were the case, Lieberman would feel an urge to shorten the life of the incumbent government as quickly as possible so that he could join the next one. If he is convicted of a felony that carries moral turpitude and is given a three-month (or more) prison term, his political career will be finished, and he will be kindly embraced by the business world and the oligarchs. In private talks, Lieberman has said that any conviction, however minor, will result in his immediate resignation and departure from politics. He has run out of patience. Those who know him know that patience isn’t his strongest suit. If they don’t want me — he’ll say — I don’t need any favors. My life can be much better off without politics. And what about politics itself? Will it be better off without Lieberman? This remains to be answered.