Liberman Waits for Chance To Collect on Political Debts

The man behind Prime Minister Benjamin Netanyahu's electoral victory is none other than former Foreign Minister Avigdor Liberman, and he will not let the premier forget it, writes Ben Caspit. 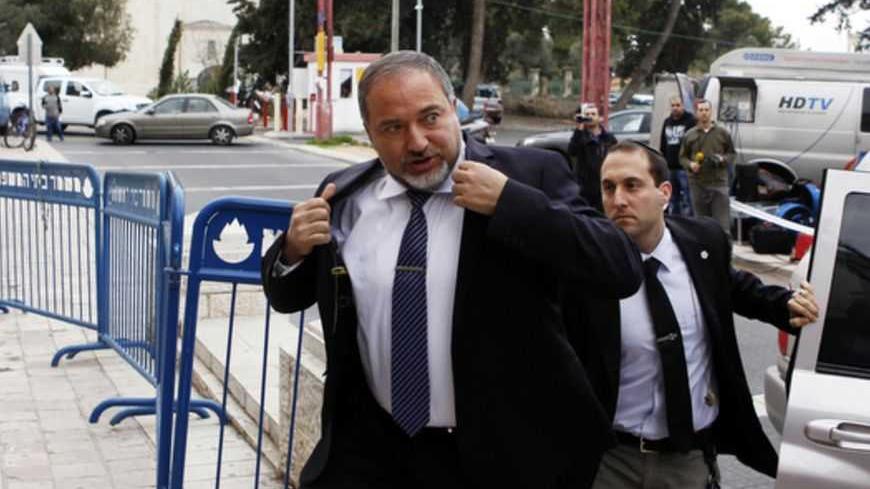 Israel's former foreign minister Avigdor Liberman is on hold. The man considered until recently the most powerful figure on the Israeli political map and the biggest threat to the hegemony of Israeli Prime Minister Benjamin Netanyahu is currently awaiting criminal trial on charges explosive enough to put the lid on his political career. And yet, given his current situation, Liberman has never been in a better position. Considering that for the time being, he is barred from serving as a government minister (although, pending a verdict in his case, he can keep his office as Knesset member), Liberman still wields vast political power. What’s more, he has lost none of his influence on Netanyahu, or his impact on the government and the decision-making process. Be that as it may, Liberman's future is uncertain and at the mercy of the judges. His present, in contrast, is by far more relaxed and promising and puts him at an advantageous starting point in the race for leadership.

Liberman has mastered the art of power wielding. He is an expert at situation evaluations, whatever the circumstances, and a real pro in maximizing the potential of leverage. Thus, already prior to the recent parliamentary election, he realized that on the legal level, he was hanging by a thread and was smart enough to opt for an alliance with Netanyahu. As a matter of fact, Liberman handed the premiership to Netanyahu on a silver platter. Had it not been for the union between the ruling Likud and Yisrael Beiteinu, Bibi (Netanyahu) would have no doubt lost the election. This is now clear to all and sundry. Just before the union between the Likud and Yisrael Beiteinu was announced, the polls anticipated only about 24 mandates for Netanyahu. Labor Party leader Shelly Yachimovich was already sure at the time of landing 21 to 22 mandates. The momentum was working against Bibi and in favor of Shelly. The Israeli voters, who yearned to see Netanyahu replaced at the helm, would have elected Yachimovich to the premiership. Yachimovich was supposed to become the new “Tzipi Livni,” only better: Unlike Livni in 2009, Shelly Yachimovich would have succeeded in setting up a government.

However, at that point, Bibi and Liberman joined forces and straight away soared in the polls to 35 Knesset seats. And that was it, the game was over. It was clear by then that no party on the political map could touch that number. Yachimovich lost popularity almost immediately, falling sharply in the polls. Once she was no longer the sole option, the Israeli electorate started looking in other directions, wandering off to rival parties, to Yair Lapid‘s Yesh Atid, where it found a warm welcome. Lapid, the all-Israeli guy, the popular, genial, articulate and intelligent contender, did not drive away traditional Likud voters the way Livni did, nor did he turn off the bourgeois and the capitalists the way Yachimovich did. And the rest is history. Netanyahu was dealt a smashing blow by the voters and lost a quarter of his political power, but nonetheless, emerged with the upper hand in the race. He owes this to Liberman.

And Liberman is adept at debt collection. He, too, lost a quarter of his political power. Following the union with the Likud, Liberman’s Yisrael Beiteinu dropped from 15 mandates to a mere 11. It was the first time in his political career that Liberman found himself on the decline. And he had none but Bibi to thank for that. However, since the controlling shares of the entire business were in his hands, Liberman had seen to it that the waning electoral support would not affect him or his party. The 11 Knesset members of Yisrael Beiteinu hold more jobs in the incoming government than any other party. They have five ministerial portfolios (including the Foreign Affairs portfolio, which has been set aside for Liberman), the chairmanship of parliamentary committees and deputy positions. The fact that Yisrael Beiteinu has managed to maintain its political power while the Likud faces stagnation and even regression has stirred up unrest in Benjamin Netanyahu’s court. Anyway, Liberman ignores the agitation in the ally party. He knows when to close his eyes and turn his head.

As of now, Liberman chairs the Knesset Foreign Affairs and Defense Committee, the most prestigious and critical committee in the Israeli parliament, which is in charge of highly sensitive issues. In this role, he is privy to the innermost state secrets. And by virtue of his standing, he is a ruling partner to, and on par with, Benjamin Netanyahu.

Liberman is not a member of the cabinet, but he is holding the keys to the kitchenette, the Israeli diplomatic and security cabinet. What’s more, the prestigious Foreign Affairs portfolio is awaiting him. Meanwhile, Netanyahu is filling in for him. When it was suggested that other ministers — Silvan Shalom or Gilad Arden, for instance — take up the Foreign Affairs portfolio until Liberman is finished with his trial, Yvette (Liberman) was quick to respond.

"No way!" he asserted sharply, and that’s the way it was. No one would get near his Foreign Ministry seat as long as Liberman breathed.

In the framework of the coalition negotiations, Yair Lapid sought the Foreign Affairs portfolio for himself. Liberman reacted vehemently, so much so that Lapid realized right away that fighting for it would be a waste of time. And it is quite clear why Liberman was so insistent in this case: It was not the Foreign Affairs portfolio, but rather the trial he was facing. Before it was decided to press charges against him, Liberman had openly admitted that the office he coveted in the next Netanyahu government was that of finance minister, which he planned on boosting with the Housing and Interior portfolios. However, plans fell apart. The charges brought against him changed the situation strategically. The majority of witnesses for the prosecution in his trial are Foreign Ministry employees. It is thus essential that they know that Liberman is expected to be back in office once the trial is over. This, naturally, depends on him being exonerated from the charges of moral turpitude. No wonder, then, that Liberman has been firmly holding on to the Foreign Affairs portfolio.

What future scenarios may be expected? Well, to start with, a schedule has already been put in place. Lieberman's attorneys have reached an agreement with the State Attorney’s Office assuring Liberman a speedy trial. The time frame set for the trial is three months or so. This means that by summer, the trial will be over. That is, by July or at the latest, August 2013, Liberman will know whether his political career is over or restored to life.

If convicted and found guilty of moral turpitude, Liberman will most likely appeal the verdict. He will then be on hold while the case is in abeyance, pending the resolution of his appeal. If, on the other hand, he is acquitted or found guilty, while being exonerated from the charges of moral turpitude, he will resume office in the Ministry of Foreign Affairs without further ado. It will be the first time in his political career that no dark cloud of criminal suspicion hangs over his head. He will then be fresh and full of energy. He will challenge Netanyahu and strive to succeed him in the Likud leadership. Indeed, he will then be a major player in the battle for the future leadership of Israel.

And if Liberman is convicted and expelled from the political arena, what then? He will go for business. He will carry on his intensive activity on the Moscow-Tel Aviv line, which holds great potential for all kinds of ventures — in business, as well as in the realm of covert global power struggles. One way or another, Liberman is sure to enjoy himself, as he has always done.