Hundreds of supportive Shas party members are gathered outside the home of Interior Minister Aryeh Deri, calling to overturn the Supreme Court ruling that his prior convictions bar his appointment. 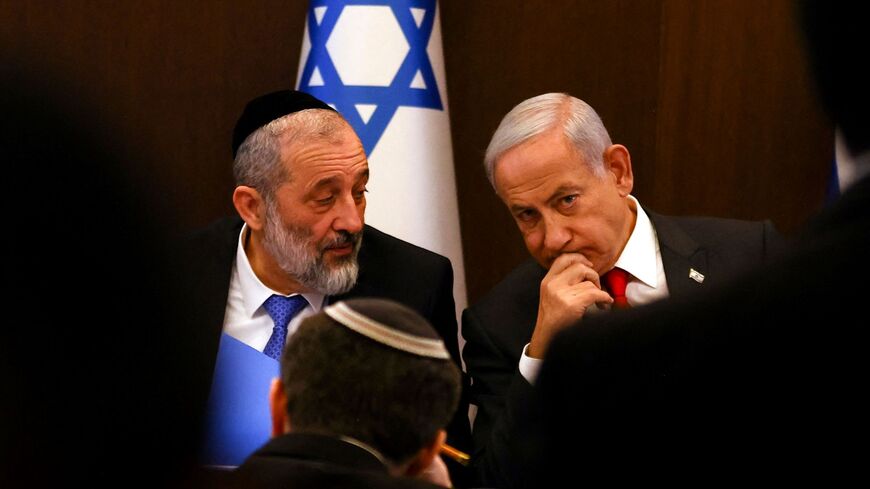 Hundreds are demonstrating on Wednesday night outside the Jerusalem home of Interior Minister Aryeh Deri, protesting a court ruling earlier in the day negating his appointment.

The Supreme Court ruled that the appointment of Deri as minister was “unreasonable in the extreme” due to his criminal convictions, especially the one for tax fraud in January 2022.

Will Aryeh Deri resign to avoid an Israeli political crisis?@owenalterman has the latest from Jerusalem, where PM Netanyahu and other coalition leaders are planning their next steps following the High Court's ruling on Aryeh Deri's ministerial roles#i24NEWSDesk | @benitalevin pic.twitter.com/fQAWXfPG0A

At the time, Deri resigned from the Knesset as part of a plea bargain. Since a trial was avoided, the court did not rule whether the offense was considered "moral turpitude," which would bar him from running for office for seven years. Still, after his appointment as minister, the Movement for Quality Government petitioned the court, arguing that his 2022 conviction, as well as an earlier conviction in 1999, made him unfit to be minister.

In its Wednesday ruling, the court said that as part of the 2022 plea deal, Deri gave the Jerusalem Magistrate’s Court the impression that he was retiring from political life. Deri, however, claimed that his party's electoral support at the November elections testified to the will of the people for him to become minister, despite his former convictions.

The Supreme Court's ruling seemingly aggravates the ongoing political crisis in Israel over the judicial reforms pushed by the Netanyahu government. Prime Minister Benjamin Netanyahu and his associates are seeking to transfer some responsibilities of the legal system to the Knesset, in a move considered by the liberal camp as undemocratic.

The ruling was met with furious reactions by coalition leaders. The ruling Likud party stated it will act "via any legal means available to us and without delay." Shortly after the ruling, Netanyahu visited Deri’s home. According to Likud spokesperson’ office, Netanyahu told Deri that "when my brother is in need, I reach out to him." Other coalition ministers also arrived. As this article is written, supporters are outside Deri’s home, chanting, "He is innocent.’’

Deri was one of the founding figures of the ultra-Orthodox Mizrahi Shas party in the 1980s, fighting against discrimination against Jews from Middle Eastern origins. His 1999 conviction carried a sentence of four years in prison. For his many supporters, his imprisonment was part of the persecution by the Ashkenazi elite against the Mizrahi community. After prison, Deri returned to lead Shas, and has become one of the most influential politicians in the country. He was responsible, to a great extent, to Prime Minister Benjamin Netanyahu successfully assembling a majority coalition after the Nov. 1 elections.

As such, Netanyahu knows that the future of his coalition depends on finding a legal solution that would keep Deri in his position. Several coalition members are now demanding to ignore the court ruling, but it is unclear whether Netanyahu has any maneuvering space. It is also not clear whether the planned judicial reform could offer Deri the possibility of keeping his portfolio.