Supporters of Shas leader Aryeh Deri are celebrating his appointment to once again head the Ministry of Interior, from which he was forced to resign in 1993. 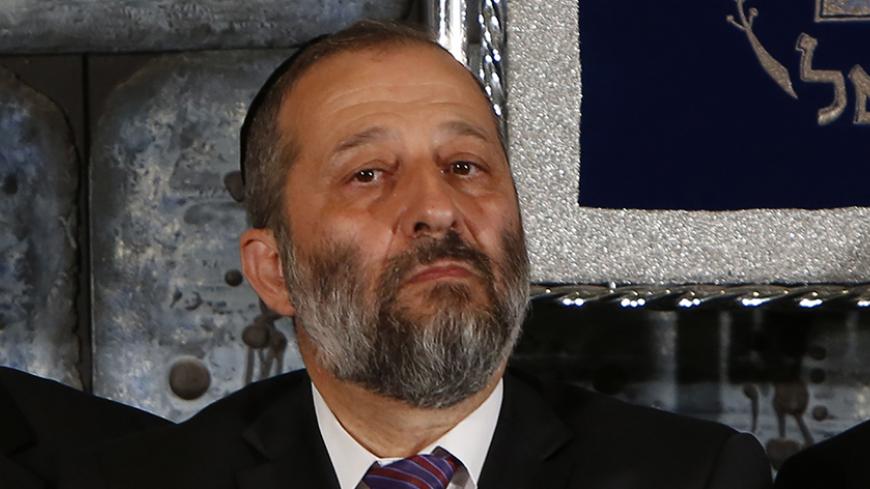 Israeli Minister of Economy Aryeh Deri looks on during the traditional photograph in honor of the swearing in of the 34th government of Israel, Jerusalem, May 19, 2015. - GALI TIBBON/AFP/Getty Images

On Jan. 10, the Israeli Cabinet approved the appointment of Aryeh Deri as minister of interior. Deri, chairman of the ultra-Orthodox Shas, which represents Mizrahi — Jews of Middle Eastern and North African origin — will also continue in his role as minister in charge of developing the periphery. Deri’s appointment follows Silvan Shalom's resignation as head of the Interior Ministry after the publication of testimony by women who claimed that he had sexually harassed them. Deri, who had been minister of economy before resigning that post Nov. 1, returns to head the Interior Ministry 22 years after he left the same post, in September 1993, under indictment for corruption. Deri was ultimately convicted of graft, fraud and breach of trust, and served close to three years in prison.

Deri’s return to the “scene of the crime,” as some media outlets have described the situation, has become a moment for joyous celebration among the ultra-Orthodox community that backs Shas and views his appointment as righting a historic wrong. At the same time, to organizations and others advocating clean government, Deri’s return to the Ministry of Interior represents a severe decline in public standards and ethics. The Movement for Quality Government in Israel has petitioned the Supreme Court to nullify the appointment, which had been green-lighted by Attorney General Yehuda Weinstein.

Deri and Shas supporters find immense symbolism in his return to the ministry where he began his meteoric political rise in government in 1988, when at the age of 29 he became (and remains) the youngest minister in the country’s history. Deri’s return is proof to his supporters that he has overcome all those who in their eyes allegedly tried to steer him away from his destiny.

“The public will never understand our joy,” former Shas spokesman Itzik Sudri told Al-Monitor. “As far as Aryeh Deri is concerned, this is truly a return to the scene of the crime, a crime of which he was the target. Aryeh Deri was thrown in jail not because he is Aryeh Deri. He was thrown in jail because of us, because he led the struggle of the Mizrahim. He became a threat to the Ashkenazi [Jews of European origin] establishment, and he paid a price. His return to the Ministry of Interior is a true victory, even beyond the symbolism.”

Sudri is convinced that Deri’s comeback will benefit the broader public, especially minorities, including Israel’s Arab citizens. “Deri was the first to talk about discrimination against Israeli Arabs. [Prime Minister] Yitzhak Shamir wanted to fire him for that. That’s why the Arab representatives in the Knesset have nothing but praise for this appointment. Deri’s return to the Ministry of Interior is a victory for anyone wishing to champion Israel’s disadvantaged populations.”

Among Shas backers, there’s almost a sense that the Messiah has arrived. “Deri’s return to the Interior Ministry provides a sense that Shas is returning to its glory days,” Asher Medina, Shas' Knesset faction secretary, told Al-Monitor. “This is certainly coming full circle. Very many people felt for years that he had been done an injustice, and for us this move symbolizes a final resurrection from that crisis that befell Shas.”

Shas voters and supporters are now awaiting the Supreme Court’s ruling on the petition against Deri’s appointment. “If the court blocks Deri from taking office, all hell will break loose. People will take to the streets,” Jerusalem resident and Shas supporter Itzik Bouhbut told Al-Monitor. “If that happens, Shas will double its strength in the next elections, and this move will prove that he is being persecuted for personal reasons. The legal elites are the ones who sent him to jail for trivialities, and now they are trying to prevent him from coming back to serve the public that elected him, even though his period of ‘disgrace’ is over and even after he served his sentence.” Following his conviction, Deri had been banned from holding public office for seven years.

Mordechai Kremnitzer of the Israel Democracy Institute believes that Deri does not belong in politics, in any position, in light of the offenses for which he was convicted and because he never expressed regret for his deeds. Kremnitzer told Al-Monitor, “Despite the public support for Shas, and its voters’ desire to see Aryeh Deri back in the Interior Ministry, this is still damaging to the rule of law and sends a troubling message to the legal and law enforcement systems in Israel.”

In the political arena, little opposition has been voiced against the appointment. Zionist Camp Knesset members Eitan Cabel and Mickey Rosenthal are among those who noisily opposed the appointment, but most other lawmakers have not been keen to publicly share their views on the subject.

“From my experience in the Knesset,” Rosenthal told Al-Monitor, “members of the Knesset prefer not to deal with these issues. Tomorrow someone will need something from Deri, so people say, ‘Why mess with him?’ But this does not make the whole thing kosher. This appointment is very problematic. Think what would happen if [former President] Moshe Katzav were appointed president after leaving jail.” Katz is currently doing time for a rape conviction.

Rosenthal remarked that Deri’s people had asked him to stop using the expression “return to the scene of the crime,” and he has obliged. “This is nothing personal against Deri,” he explained. “It’s a question of the kind of people you want to see in our politics.”

According to Shas' Medina, Deri has been surprised by the mildness of the public opposition to his appointment. He said, “The public has already accepted the fact that Deri was a Cabinet minister, and it sees nothing wrong in him being minister of the interior. One must remember that there is no connection between the offenses for which he was accused and the Ministry of Interior specifically.”

Medina reckons that the top court will reject the petition against Deri's appointment. “It’s not a legal matter,” he said. “It’s a public matter, and the public has expressed itself at the ballot box and chosen Deri. This is the epitome of democracy. Any [judicial] intervention in this case would be unusual and inappropriate.”

Shas is without doubt a unique party. The narrative that defines the party's identity, even compared to that of other ultra-Orthodox parties, is not ideological in its essence, but rather sectoral. This sectoral basis is, of course, overlaid with additional social and other ideas. Perhaps this is why Shas members attach such importance to the symbolism of Deri’s return to the Interior Ministry. Many in the party speak of the “pride” that Shas provides for Israelis of Eastern origin compared to the discrimination and humiliation they felt before its establishment in 1982. When a party’s central platform is to provide sectoral pride, one can assume its backers will not easily forgive a humiliation such as blocking the path of their leader to an important ministerial position.