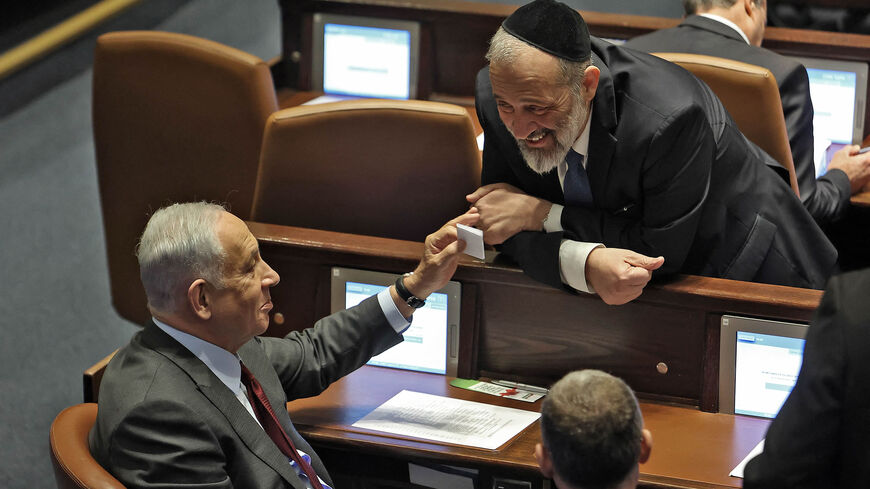 Israeli Prime Minister-designate Benjamin Netanyahu speaks with Knesset member Aryeh Deri of the Shas party during a session to elect the new speaker of the assembly at its Plenum Hall, Jerusalem, Dec. 13, 2022. - Gil Cohen-Magen/AFP via Getty Images

Her instruction followed a Supreme Court ruling the day before, disqualifying the appointment of Deri because of his prior convictions of fraud and breach of trust.

The ruling of the Supreme Court marks a major step up in the ongoing culture war pitting democratic and liberal Israel against a conservative, nationalistic and extremist Jewish state. Since the Nov. 1 elections that brought to power a coalition of radical right-wing parties to form Israel’s most extremist government in 75 years of independence, both sides have been preparing, training and rattling their swords. The High Court’s nearly unanimous decision (10 to 1) on Deri, one of the pillars of the new coalition, drew the official line in the sand of this unprecedented 21st century version of this confrontation.

According to the ruling, Netanyahu will have to fire Deri in the coming days or send the country into an immediate constitutional tailspin. He understands this, as does Deri, whose appointment the justices ruled “unreasonable in the extreme” due to his criminal convictions, especially the one for tax fraud a year ago.

One solution under discussion in order to placate Deri and make up for the humiliation he suffered at the hands of the High Court is to appoint him "alternate prime minister." This title was invented by Netanyahu’s short-lived 2020 power-sharing government with his political rival Benny Gantz, which allowed the prime minister to remain in office even as his corruption trial was getting underway, since Israeli case law does not oblige an indicted prime minister to resign. Deri, a highly skilled political operator hopes his appointment as an “alternate” would suffice to win court approval given that technically he would not be considered a member of government.

Among the other trial balloons being floated as Netanyahu mulls his options, are amending the quasi-constitutional Basic Law: The Government, and/or moving ahead with a controversial legal reform that abolishes the “reasonable grounds” legal standard on the basis of which Deri was disqualified.

In other words, the idea is to change the rules of the game in mid-play. However, even if the law were amended to abolish the reasonable grounds argument, the High Court may well rule that this does not apply retroactively.

The fate of these two longtime political partners is intertwined. Netanyahu needs Deri to help him push through laws allowing the suspension or annulment of his corruption indictments, while Deri is dependent on Netanyahu to clean the slate of his criminal past.

Netanyahu and Deri have teamed up with Justice Minister Yariv Levin, a longtime advocate of curbing the High Court’s authority, to advance reforms that Israeli liberals regard as nothing short of a coup d'etat and the assassination of democracy, intended to allow the two to outwit and destroy Israel’s legal system and judicial independence. The interests of all three coincide with those of their other coalition partners, the ultra-Orthodox United Torah Judaism party that seeks to neuter the top court’s rulings mandating military service by its followers, and of the extreme Religious Zionism and Jewish Power parties, which see the High Court of Justice as an obstacle to implementing their pro-settlement, anti-Palestinian policies in the occupied territories.

The High Court's shocking decision comes as the Knesset’s Constitution, Law and Justice Committee is racing ahead to prepare Levin’s reforms for approval. Borrowing an analogy from the world of sports, the ruling is akin to sending off a key player of one of the teams just seconds before the opening whistle of a decisive final match.

Deri is Netanyahu's most senior partner. Sometimes he seems even more senior than Netanyahu. Without Shas, not only is the legal revolution imperiled, so is the coalition’s future. Senior Shas officials have already warned that if Deri is not in the government, there will be no government. However, these threats were made before the High Court's decision. Deri is unlikely to pull his party out of the coalition even if he himself cannot serve in government.

In the meantime, the president of the Supreme Court, Chief Justice Esther Hayut is reportedly considering resigning if indeed the Knesset greenlights the Levin reforms. Such a move could prompt others among her colleagues to walk out, creating a crisis that the founding fathers of the state did not dare to imagine.

After an impressive demonstration by some 80,000 Israelis who came out in pouring rain last Saturday to protest the legal upheaval, another demonstration is planned for Saturday. This time, the weather forecast is siding with the protesters, and organizers hope more than 100,000 will attend. The police are gearing up, with 1,000 officers.

The key to Netanyahu’s political entanglement rests with Deri, who heads the second-largest party in the coalition (after the Likud). Netanyahu knows that Deri, who enjoys great popularity among Shas voters, can topple his government. Quite a few people have already suggested that Netanyahu tricked Deri, knowing his appointment would not pass the court’s scrutiny but going through the motions to ensure Shas support. The question is whether Deri will now try to blackmail Netanyahu, force him to appoint him as “alternate” prime minister or carry out another constitutional-legal maneuver to ensure his backing.

Netanyahu knew what he was doing when he rushed to Deri's home following the announcement of the High Court's decision. "When my brother is in need, I reach out to him," the prime minister told the hundreds of Deri fans camped outside. Deri is not the only one in distress. Netanyahu is, too. The plight of these two “brothers” unites them in the war declared on the rule of law in Israel. At the moment, no one seems able to stop them.