The new militant groups are expanding their activities against Israeli soldiers and settlers. 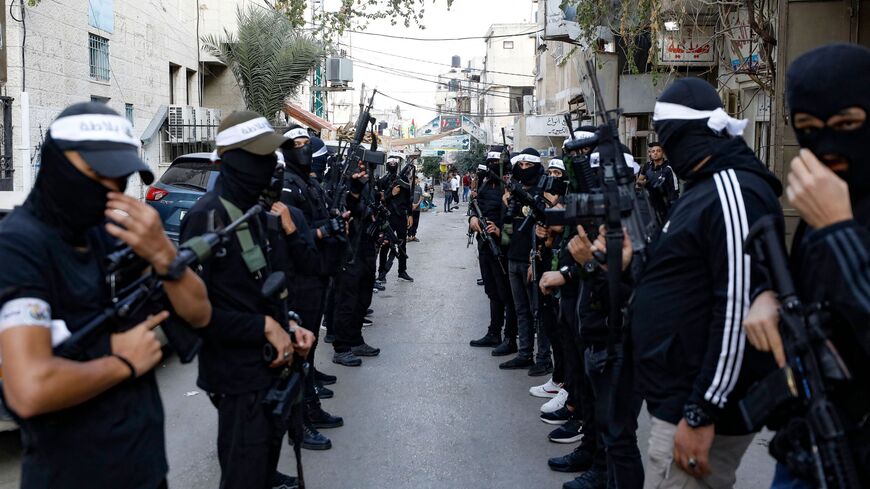 Palestinian gunmen from the Balata Brigade militant group rally in the refugee camp of Balata near the West Bank city of Nablus on Nov. 4, 2022. - ZAIN JAAFAR/AFP via Getty Images

RAMALLAH, West Bank — In the West Bank, several new militant groups have proclaimed readiness to fight Israel, including the Balata Brigade in the Balata refugee camp, one of the largest in the West Bank, and the Osh al-Dababir (Hornets Nest) Battalion in the Jenin camp.

On Nov. 9, the Balata Brigade clashed Israeli forces after Israeli settlers and right-wing parliamentarians entered Joseph’s Tomb in the city of Nablus.

Mahdi Hashash, a 16-year-old member of the brigade, was killed in the clashes.

“We clashed with the Israeli army from a very close range, opening fire and throwing explosive devices, causing losses among the army’s ranks,” read a statement by the Balata Brigade. “Resistance fighters from the Lion’s Den and Jenin Brigade also took part in the clashes.”

The Balata Brigade boasts dozens of fighters. Despite the distance, it maintains high coordination with other militant groups such as the Jenin Brigade, and the Lion’s Den, many of whose members showed up during Hashash’s funeral, sending the message that their group was still active despite Israel’s crackdown.

Most of the Balata Brigade’s members belong to the Fatah movement. Israel views the group with concern.

Israel is also concerned about Osh al-Dababir Battalion in the Jenin camp, which is mostly composed of Fatah members, as well as other groups such as the Jenin Brigade.

These groups are also attracting new fighters, which suggests that the shootings and other armed operations against Israeli soldiers and settlers will not stop, especially in the areas within the Green Line and the West Bank settlements, which means a long war of attrition for the Israeli army.

According to a Nov. 9 report by the Israeli Maariv newspaper, the Israeli security services are on high alert in the West Bank amid predictions that the recent resistance activity could continue.

The director of the Yabous Center for Consultations and Strategic Studies, Suleiman Bisharat, told Al-Monitor that the emergence of new armed groups in the West Bank, to which the Jenin and Lion’s Den groups contributed, is inspiring young men to fight.

Bisharat added that the armed groups are concentrated in the camps of Jenin and Balata and the Old City of Nablus.

“These areas witnessed the fiercest battles during Operation Defensive Shield in 2002. The spirit of these battles remains alive in these young men who will not hesitate to engage in military action when the opportunity presents itself,” he said.

Bisharat explained that these groups, namely the Jenin Brigade and the Lion’s Den, are popular not only locally but across the Arab world, helping them attract ever more fighters.

He said there is a chance that these groups are being quietly, indirectly supported by certain factions or parties. If this support becomes public knowledge, the news could lead to the armed cells' expansion, a possibility that worries Israel.

The possibility of escalation in the West Bank is very high, particularly after the Israeli elections and rise of the extreme right, which seeks to escalate Israeli raids into Al-Aqsa Mosque and tighten restrictions in Israeli prisons, two factors that would inflame the situation in the West Bank.