Palestinians clash with Israeli forces almost on a daily basis resulting in an increasing number of deaths. 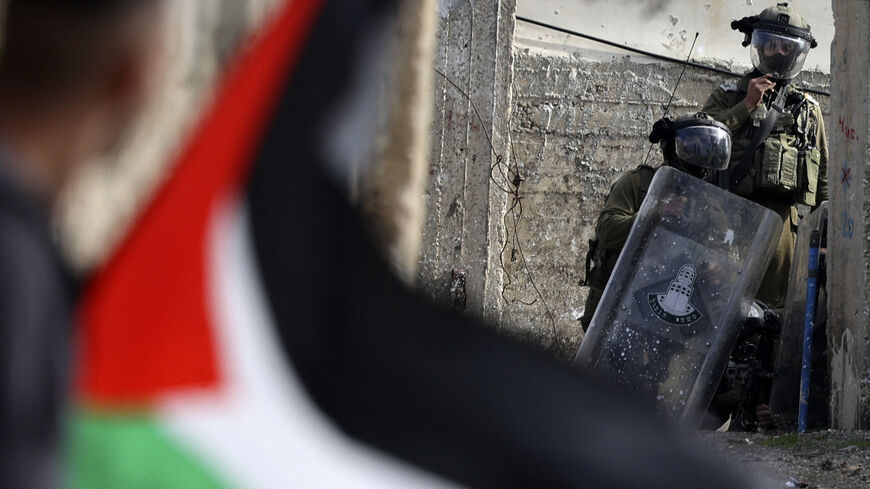 A Palestinian demonstrator waves a national flag during confrontations with Israeli troops, following a protest against the expropriation of Palestinian land by Israel in the occupied West Bank, in the village of Kfar Qaddum, near the Jewish settlement of Kedumim, Jan. 6, 2023. - Jaafar Ashtiyeh/AFP via Getty Images

Two Palestinians were killed by Israeli forces on Wednesday in two separate incidents in the West Bank, the Palestinian Authority (PA) said.

According to the PA, the Israeli military carried out an arrest raid that resulted in one death, while another Palestinian was killed following the stabbing and wounding of an Israeli civilian. The first happened in the northern town of the West Bank, and the second in a southern settlement.

In early January, the Israeli army killed two Palestinian men during a raid on a village near Jenin. A few days later, a Palestinian teenager was shot in Nablus.

Why it matters: According to media reports, most of the Palestinian deaths were a result of Israeli raids. Reports of deaths and clashes are being recorded on an almost daily basis.

Among those who were killed last year was Al Jazeera correspondent Shireen Abu Akleh, who was shot dead in the West Bank city of Jenin while on her way to cover an Israeli raid. Her killing led to worldwide condemnation of Israeli use of force. The Israeli side claims that she was accidentally hit as they were targeting other suspects.

Al Jazeera submitted the case to the International Criminal Court.

According to a statement by an Israeli soldier to The Washington Post, using live fire is necessary as the military carries out counterterrorism activities and responds to violent riots where explosive devices are present. These military raids are almost happening on a daily basis as Palestinians and Israelis clash over settlement expansion and eviction notices.

Data by the Israeli group Peace Now shows that between 2019 and 2022, there was an increase of 26% in the settlement plans in the West Bank.

Know more: Confrontations are rapidly spreading across the West Bank with clashes resulting in the death of Palestinians. Based on a November report by the UN Office for the Coordination of Humanitarian Affairs, 2022 was the deadliest for Palestinians in the West Bank since 2005.

The report showcases the exact number of deaths on record. Until then, 140 Palestinians were killed by Israeli forces in 2021, compared to 78 in the same period in 2021. The data from the Gaza Strip is also telling with the number of deaths totalling 298 between 2021 and 2022.

The situation is not expected to get any calmer as Prime Minister Benjamin Netanyahu’s far-right government was sworn in last December. Newly appointed National Security Minister Itamar Ben-Gvir instructed police on Sunday to remove Palestinian flags from public places, as such acts could be considered incitement to terror.

Al-Monitor previously reported on new militant groups springing up in the West Bank proclaiming readiness to fight, including the Balata Brigade in the Balata refugee camp, one of the largest camps in the West Bank, and the Osh al-Dababir (Hornets Nest) Battalion in the Jenin camp.