The West Bank is becoming a daily battleground, witnessing night raids and clashes between Israeli authorities and Palestinians. 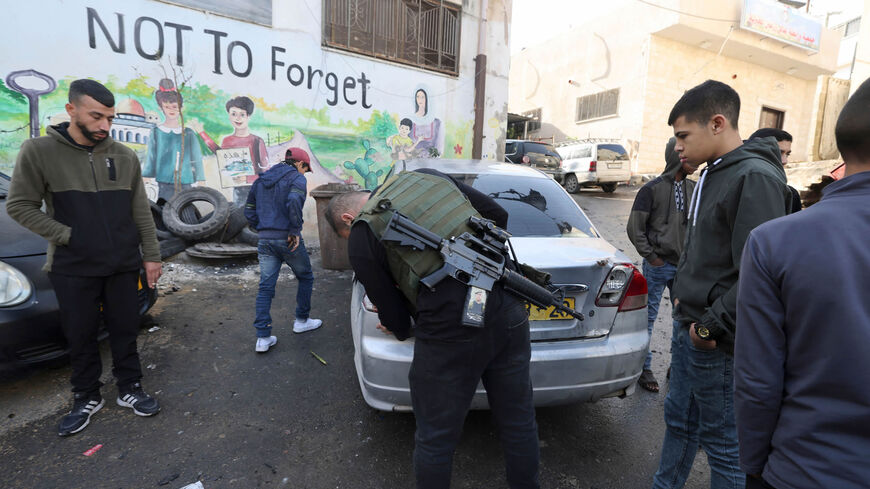 Palestinian residents and gunmen inspect the damage following the accidental explosion of an improvised explosive device in Jenin refugee camp, near the city of Jenin, West Bank, Dec. 12, 2022. - Jaafar Ashtiyeh/AFP via Getty Images

An Israeli military raid in the West Bank killed a Palestinian schoolteacher and a militant early Thursday morning.

According to the Palestinian News Agency, Jawad Bawaqna and Adham Jabarin were shot in the Jenin refugee camp in the northern West Bank.

Bawaqna was secondary teacher at the Hashad Secondary School for Boys who had gone out to provide first aid to Jabarin when he was shot, according to a statement from the school.

Palestinian media identified Jabarin as a fighter affiliated with Fatah, the political party that controls the Palestinian Authority (PA).

Israeli military raids have become a daily occurrence in the West Bank over the past year, with Israel claiming they are targeting militants to prevent future attacks. The number of Palestinian deaths since the beginning of 2023 stands at 17 so far, with several injuries registered by the Israeli side.

Israeli authorities have not commented nor released details thus far.

Rising tensions: The rising tensions between Israelis and Palestinians were also reflected in a heated exchange Wednesday at the United Nations Security Council on the Israeli-Palestinian conflict.

The West Bank is at a boiling point, with almost a daily surge in clashes between residents, settlers and Israeli forces. Al-Monitor previously reported on new militant groups springing up in the West Bank proclaiming readiness to fight.

The Gaza Strip is also witnessing clashes of its own, with a Palestinian population that feels increasingly trapped, but it seems that direct confrontations have moved to the West Bank.

During the Wednesday meeting, UN Middle East envoy Tor Wennesland warned of the dangerous situation and the uncontrolled spiraling violence.

“Israelis and Palestinians remain on a collision course amid escalating political and inflammatory rhetoric as well as heightened violence in the West Bank — both with potentially grave consequences,” he said. “Absent a concerted and collective effort by all, with strong support from the international community, spoilers and extremists will continue to pour more fuel on the fire and we will move still further from a peaceful resolution of the conflict.”

Know more: A diplomatic delegation from Europe, South Africa and Australia met on Wednesday with Palestinian officials and Islamic clerics at Al-Aqsa Mosque in a show of support for the status quo and Jordan's custodianship of holy sites in Jerusalem.

The situation is not expected to get any better as Prime Minister Benjamin Netanyahu’s far-right government was sworn in last December. Newly appointed National Security Minister Itamar Ben-Gvir instructed police a couple of weeks ago to remove Palestinian flags from public places, as such acts could be considered incitement to terror. His visit to the Al-Aqsa compound was considered by many countries as a sign of defiance of the status quo.

Netanyahu’s Likud party made it clear that it would follow an expansionist policy in the West Bank promising to develop new settlements. He was quoted saying by the media that his government would “advance and develop settlements in all parts of the land of Israel — in the Galilee, Negev, Golan Heights, and Judea and Samaria,” in reference to the Biblical names for the disputed Palestinian territories in the West Bank.

Also in December, the Palestinians were able to pass a resolution at the UN, requesting the International Court of Justice (ICJ) to legally intervene in the dispute, and provide an advisory opinion on Israel’s policies in the West Bank and east Jerusalem.

In line with the current Israeli policies and as a punitive measure for the approved UN resolution, Netanyahu’s government responded by withholding $39 million in tax revenue that would be usually sent to the PA. According to media reports, the money is being redirected instead to a compensation program for Israeli families affected by Palestinian militant attacks.

The much-needed amount would help alleviate the financial challenges that the Palestinians are currently facing. In response to these measures, more than 100 countries called on Israel to reverse its decision.

The UN member states issued a joint statement, stating, "Regardless of each country's position on the resolution, we reject punitive measures in response to a request for an advisory opinion by the International Court of Justice, and more broadly in response to a General Assembly resolution, and call for their immediate reversal.”

Separate shows of support were tweeted by many, refuting such punitive policies.

Seeking an advisory opinion of the ICJ cannot and should not be a cause of punitive measures. For anybody. Anytime. https://t.co/jhlB9CrwV2