Mohammad Shtayyeh said the next Israeli government is preparing to declare war on the Palestinians; Israeli far-right parties say they will target terrorism at its source. 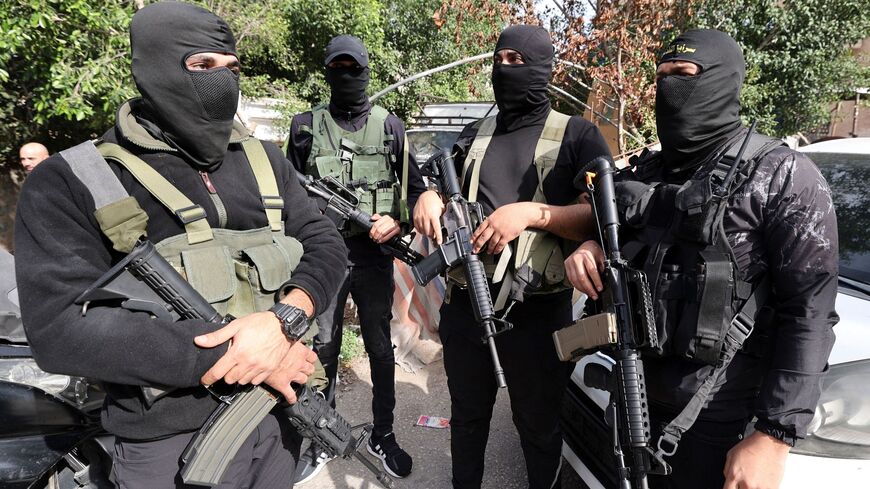 Palestinian gunmen attend the funeral of a youth who was reportedly killed during a raid by Israeli forces on Nov. 21, 2022 in the West Bank city of Jenin. - JAAFAR ASHTIYEH/AFP via Getty Images

RAMALLAH, West Bank — Palestinians fear that the next Israeli government, most likely led by Benjamin Netanyahu and including extreme-right leaders Itamar Ben-Gvir and Bezalel Smotrich, will inflame the situation on the ground in the Palestinian territories.

Palestinian Prime Minister Mohammad Shtayyeh said during a cabinet session on Nov. 21 that the next Israeli government is preparing to declare war on the Palestinians, under the leadership of the settlers.

The upcoming Israeli government attaches great importance to many files that would anger the Palestinians, including tightening the measures on Palestinian prisoners inside Israeli jails, clamping down on the Palestinians’ living conditions, increasing settlers’ incursions into Al-Aqsa Mosque, expanding settlements in the West Bank, legalizing random outposts, changing the police and army’s shooting instructions at Palestinians and increasing Israeli army raids into West Bank cities and towns.

Zvika Vogel, a Knesset member for the far-right Otzma Yehudit party, said in a television interview on Nov. 17 that Ben Gvir will be internal security minister in the new government. “We intend to target terrorism in its source and stop it there, and we will transfer the war to the enemy arena,” he added.

These Israeli positions and statements could further inflame the Palestinian street, escalating into increased confrontations and armed operations in the West Bank and inside the Green Line, and perhaps a military confrontation with the Gaza Strip. Greater  tensions in the region could cause political repercussions on the Palestinian Authority (PA).

The Hebrew-language website Walla News reported on Nov. 18 that Shin Bet chief Ronen Bar warned during a meeting with Netanyahu of “the danger of the PA’s collapse” if the cabinet includes the political parties of Smotrich and Ben Gvir. Both lawmakers have repeatedly called on the Israeli army to increase its operations in the West Bank and to loosen the shooting regulations.

Walla News added that the Shin Bet and other parties, including the Israeli military intelligence, are “very concerned” about the security escalation in the West Bank and the emergence of armed Palestinian groups, such as the Lions’ Den.

The two Israeli security establishments also fear, according to the website, that the PA could lose control over large parts of the West Bank, which would lead to security deterioration unprecedented for more than 20 years.

The killing of three Israeli settlers near the Ariel settlement in the West Bank on Nov. 15 has also raised concerns that the Israeli military could fail to prevent similar operations in other areas.

On Nov. 20, the Lions’ Den claimed to have successfully drawn a special Israeli army unit into the old city of Nablus, where clashes between the two erupted. The Osh al-Dababir (Hornets Nest) Battalion claimed responsibility on Nov. 19 for an attack in Jenin against Israeli forces near the separation wall.

Ahmad Majdalani, member of the PLO’s Executive Committee, told Al-Monitor, “The talks on the government formation in Israel are focused on which [party] wants more settlements, wants to further erode our rights, and wants to further annex our lands.”

He added, “The next Israeli government is a far-right, nationalist and religious cabinet that will [most probably] include fascist members that do not believe in the two-state solution or in any political solution. This cabinet would rather work on the gradual annexation and ethnic cleansing of our land and people.”

He continued, “The next government has political repercussions, including on the nature of the relations between the PLO and Israel.” Restoring relations with Israel, he said, would have to be based on the fact that “we are under occupation and we must resist it at all costs.”