Israel expands military operations in West Bank ahead of elections 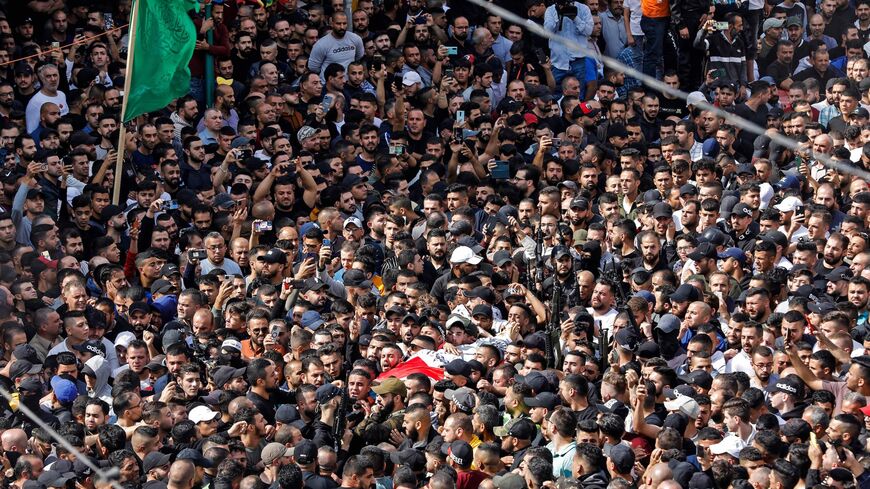 RAMALLAH, West Bank — The Israeli military killed five Palestinians on Oct. 25, two of whom were affiliated with the Lion’s Den, in the city of Nablus in the northern West Bank. The military operation lasted for about four hours and was described as the most violent since 2002's Operation Defensive Shield.

The Israeli attack came 48 hours after the killing of Lion’s Den leader Tamer al-Kilani in an explosion in Nablus on Oct. 23. The group accused the Israeli Shin Bet of being behind Kilani’s killing, in what was seen as the first Israeli targeted assassination in 15 years. However, Israel has remained silent on the operation.

The killing of Kilani and the large-scale operation that followed in Nablus — and which was directly monitored by the head of the Shin Bet and the army chief of staff — appear to be the beginning of a broader military action that Israel is implementing to eliminate the armed group that was recently formed. It seems the Israeli decision to launch this wide-scale military action came after an Israeli soldier was killed near Nablus on Oct. 11.

All signs indicate that Israel is heading toward further escalation in the West Bank, which began with the imposition of a siege in Nablus on Oct. 11, after which it moved to assassinations and massive raids and may lead to a large-scale operation for several days inside the city similar to what happened in 2002.

These events sparked almost daily confrontations between Palestinians and Israeli forces in the West Bank, which also witnessed a day of mourning and a total strike. Meanwhile, the Lion’s Den group vowed in a statement to respond to Israel’s actions. Israel, in turn, raised its security readiness for fear of any possible attacks by the group.

Fadi Nahas, a researcher on Israeli national security and military affairs at the Palestinian Forum for Israeli Studies – MADAR, told Al-Monitor that the resumption of assassinations and the military raids in Nablus indicate that Israel is heading toward further escalation, as the Israeli army had threatened to do about two months ago in light of the failure of the intelligence operations specifically in the northern parts of the West Bank.

Nahas pointed out that Israel is unable to deal with the militants belonging to the Lion’s Den since they do not belong to a specific faction, nor does the group have a clear structure. This is why the Israeli army is seeking to launch a wide-scale military operation in the northern West Bank, especially after its intelligence efforts failed to reduce attacks, he added.

Nahas also said that Israel’s Minister of Defense Benny Gantz and Prime Minister Yair Lapid are using such operations in their electoral campaigns. Israeli general elections are set for Nov. 1.

Saeed Bisharat, an expert in Israeli affairs, told Al-Monitor that what is happening in Nablus shows that the leaders of the Israeli government fear Benjamin Netanyahu’s return to power in the upcoming elections. “Netanyahu uses the deteriorating security situation in the West Bank as an excuse to attack Gantz and Lapid, who decided to start the attack in Nablus, ignoring any warnings or any losses that might occur among the soldiers.”

Bisharat noted, “A greater escalation is possible in the coming days. The army may carry out an expanded operation in the cities of Jenin and Nablus even before the elections are held, under orders from Lapid and Gantz, to eliminate the armed cells. This would be a gift for Israeli voters to settle the elections in light of the high number Netanyahu is scoring in the opinion polls.”