A week before the Nov. 1 elections, Israel Defense Forces raided an explosive factory of the Palestinian Lion’s Den terrorist group and killed one of its founders. 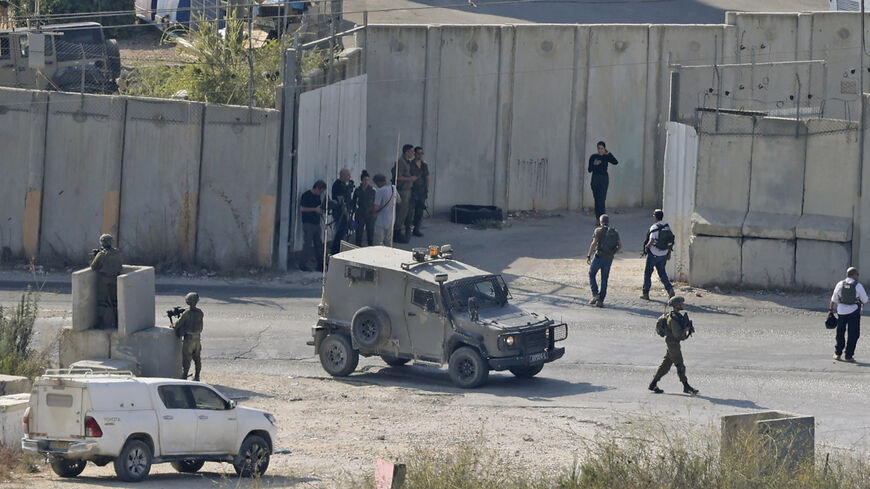 A week before crucial Israeli elections, caretaker Prime Minister Yair Lapid, Defense Minister Benny Gantz, military chief Lt. Gen. Aviv Kochavi and Shin Bet Director Ronen Bar are facing an ever-intensifying dilemma. At issue is whether to beef up military and intelligence activity in the Palestinian city of Nablus in an effort to rein in a surging wave of anti-Israel violence and crack down on militant groupings, or wait until after the Nov. 1 voting.

However, circumstances have been overtaking the dilemma in recent days and leading to stark escalation. On the night of Oct. 24-25, Israeli troops and Shin Bet agents carried out what the military billed as “ground action” in Nablus.

This term is generally reserved for a widespread military operation and infiltration of significant ground forces into hostile territory. While it has been used in the past to describe Israeli military incursions into the Gaza Strip under Hamas control, the term has not been heard for many years to describe armed Israeli activity in the West Bank. Israel usually describes its frequent raids on Palestinian towns and villages in the West Bank as pin-point and “surgical” in nature.

This was not the case in Nablus this week, when a large contingent of Israel Defense Forces (IDF) units and special police counterterrorism forces raided an apartment that Israeli intelligence described as an explosives’ laboratory and safe house of the Lion’s Den, a group of militants believed responsible for most of the recent attacks on Israeli forces and civilians in the region.

The operation lasted throughout the night, and included extensive activity and air cover. According to the IDF, five Palestinians were killed, among them Wadiya al-Houh, one of the Lion Den’s founders, and 20 were wounded. The apartment, which the IDF said housed the group’s main bomb factory, was destroyed. The operation prompted rioting and tire burnings, in what the Palestinians describe as a “day of rage,” leaving little doubt that the pressure cooker of Israeli-Palestinian confrontations is about to boil over.

“Pressure cooker” is also a term used by the military to describe an isolated operation, such as a raid on a safe house known to be harboring a wanted terrorist. It entails surrounding the building and exerting growing pressure on the person or persons inside to give themselves up, whether by moving bulldozers toward the house or firing a rocket at it. In some cases, the bulldozers or rockets bring the house down on the heads of those inside. This description is apt for the current standoff between Israeli forces and Palestinian militants. The question is not whether the pressure cooker will eventually boil over, but when.

Israel faces one of the most significant security decisions it has confronted in recent years regarding the territories it controls. Its strategy for dealing with periodic outbreaks of violence is usually to differentiate between the mostly peaceful general population, allowing it to go about its business, and the so-called “lone” terrorists responsible for attacks on Israelis. This was the policy during a wave of 2016 knife attacks against Israelis and on the initial wave of the current round of violence.

But with the spreading unrest, Israel has imposed a closure of sorts on Nablus, limiting entry and exit from the major city to three crossings, where it carries out detailed security checks. The Shin Bet believes most of those engaged in terrorist activity either hail from Nablus or escape there after carrying out their attacks, and identifies the city as the hub of the recently formed Lion’s Den group.

On Oct. 22, another senior Lion’s Den member, Tamer al-Kilani, was killed in an explosion of a booby-trapped motorcycle in Nablus. The Palestinians accused Israel of killing him, but Israel did not assume responsibility. The IDF had hoped that the war it declared in recent weeks on the Lion’s Den would send its members into hiding and buy it some calm, but its hopes appear to have been dashed, raising the specter of a third intifada.

The question now being mulled is whether to lift the restrictions on Nablus and allow Palestinian residents to maintain their daily routine, work and make a living, or impose a harsh crackdown on the city to prevent terrorism.

The opposition, led by former Prime Minister Benjamin Netanyahu, is not helping Lapid and Gantz resolve this dilemma. Instead of backing the IDF and Shin Bet, as political oppositions generally do in times of crises, Netanyahu's people have been sharply critical of Israeli “incompetence” that they blame for the surging terrorism. At the same time, they are warning the government against ordering a "political-security operation” allegedly designed to score points with voters on the eve of elections.

In the midst of this turmoil, the election campaign is entering its final leg. Lapid is scheduled to visit the Arab city of Nazareth Oct. 25 in a bid to woo the Arab electorate and help increase voter turnout that is key to Netanyahu's containment. A low turnout, as expected, would significantly bolster the former premier’s comeback prospects.

Lapid is thus forced to conduct delicate maneuvering between Arab voters’ anger at his use of the military against their Palestinian brothers in the territories, and the dire need to get them out to vote. He must convince them that their current electoral comatose state all but guarantees a victory for Netanyahu and his ultranationalist allies and could land extremist Knesset member Itamar Ben-Gvir in an influential position in Israel’s next government.