Israel has partially lifted the siege it had imposed on the West Bank city of Nablus after killing the leader of the Lion’s Den group. 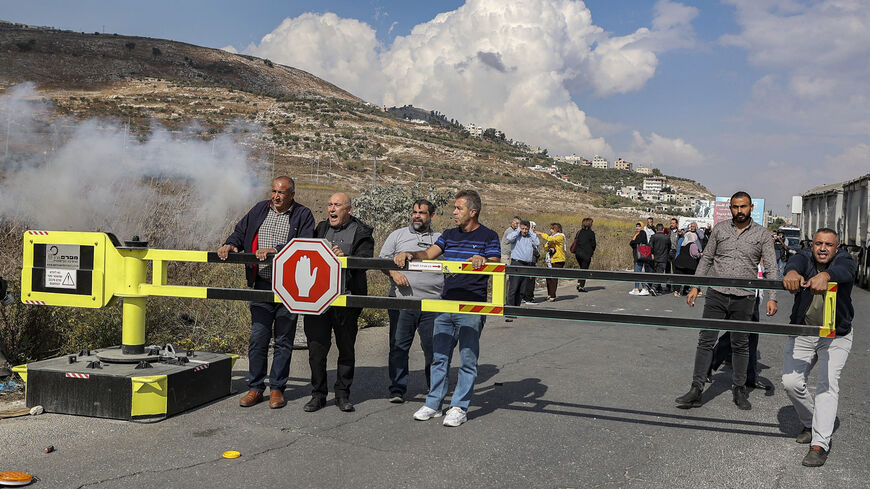 Palestinians gather to demonstrate at the Hawara checkpoint, demanding the reopening of roads around the closed-off city of Nablus, West Bank, Nov. 1, 2022. - Jaafar Ashtiyeh/AFP via Getty Images

On Nov. 3, the Coordinator of Israeli Government Activities in the Territories, Ghassan Alian, announced that the Israeli authorities approved the lifting of all restrictions imposed on movement and traffic in Nablus and the removal of all the checkpoints erected on the city’s entrances.

The Israeli army had announced Oct. 28 the partial lifting of the siege it had imposed Oct. 11 on the city of Nablus in the northern West Bank, and removed two of the three checkpoints that it had erected on the entrances to the city.

The decision to ease the siege came after Israel killed Oct. 25 the leader of the Lion’s Den group, Wadih al-Houh, and after other group members turned themselves in to the Palestinian security services so that Israel would stop pursuing them.

It seems the Palestinian Authority (PA) managed to persuade the gunmen to surrender after Israel’s Channel 12 revealed Oct. 26 that talks were being held between US, Israeli and Palestinian security officials to calm the situation in the northern West Bank.

According to the channel, the Palestinians demanded that Israel refrain from storming the West Bank and allow time to reach an understanding with the Lion’s Den group for its members to surrender their weapons and remain under the PA’s protection until the security situation is settled with the Shin Bet.

However, despite the surrender, Israeli security sources said Oct. 28, “Palestinian militants who participated in armed activities and killings will not be pardoned in any way and will be pursued.”

The Lion’s Den group issued a statement on its Telegram page, explaining that the group did not negotiate a surrender deal with any official or security authority, stressing that the fighters who surrendered decided to do so on their own.

Ahmed Rafiq Awad, a political analyst from Ramallah, told Al-Monitor, “Israel partially lifting the siege of Nablus aims to show the Israeli public that it has been able to weaken and dismantle the Lion’s Den, and to show the world that it is behaving humanely with the residents of Nablus.”

He said, “The gradual lifting of the siege could have occurred at the request of Palestinian parties, namely the PA, but the siege is still in place.”

Talal Okal, political writer for the Palestinian Al-Ayyam newspaper, ruled out the possibility that the coordination between the PA and Israel would lead to the elimination of the Lion’s Den, because the issue is no longer limited to the group’s fighters alone, as attacks in the West Bank have spread, with other individual operations being carried out against Israeli forces by Palestinians who do not belong to the Lion’s Den.

He told Al-Monitor that the wide-scale operations led by Israel inside the West Bank will not help the PA or any other party — in reference to the United States that is mediating between the two parties to contain the situation — to limit the resistance in the West Bank.

He said that Israel's raids into the West Bank cities are preventing the PA from reestablishing its control there, while also leading to more clashes between the Palestinians and the Israeli army and settlers.