Israel continues its siege on the city of Nablus in the northern West Bank, leading to economic losses while threatening to launch a military operation there. 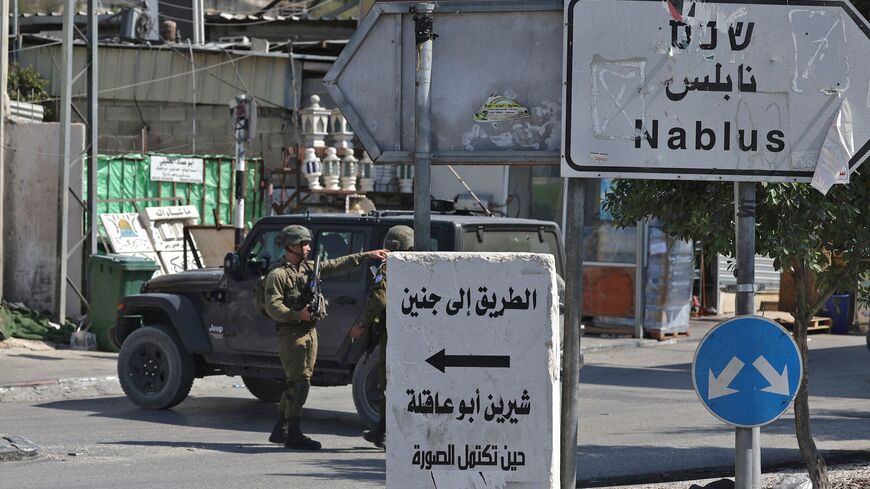 Israeli security forces deploy in the Deir Sharaf area, near the Israeli settlement of Shavei Shomron, west of Nablus in the occupied West Bank, on Oct. 11, 2022. An Israeli soldier was shot dead today near a settlement in the occupied West Bank in an attack claimed by Palestinian militants, the second deadly assault on armed forces in less than a week. - JAAFAR ASHTIYEH/AFP via Getty Images

RAMALLAH, West Bank — The Israeli army has imposed a strict siege on the city of Nablus in the northern West Bank since Oct. 11, blocking the city’s entrances with military checkpoints and earth mounds, while Israeli drones constantly hover over the city.

The siege came in the wake of a shooting attack carried out by the Lion’s Den group near Nablus in which an Israeli soldier was killed Oct. 11.

The siege, which Israel said will continue until further notice, has had economic repercussions on a city that has a particular industrial and commercial importance for the West Bank.

Shtayyeh pointed out that Nablus serves as a commercial station for shoppers from all over the West Bank governorates and from within the Green Line.

He said the weekly number of shoppers in Nablus is estimated at 15,000, with an average expenditure per shopper of $70, which pumps more than $1 million dollars per week into the city. He noted that the siege is depriving the city of these funds and affecting the economy of the Nablus governorate.

The Palestinian government, he added, along with the two chambers of commerce and industry must take immediate measures to help cover this bill.

Shtayyeh called for greasing the economic wheels of the city to preserve the national position, as Israel seems willing to impose a long siege on the city. Also, he went on to say, Israel needs to understand that ending the economic siege in return for security is an equation rejected by Nablus.

The city of Nablus, like the rest of the Palestinian cities, is still recovering from the coronavirus pandemic, and economic activity has yet to recover or reach its pre-pandemic levels. The Israeli siege has made the economic situation more complicated and has led activists to call on people to shop in Nablus to support the city and thwart Israeli attempts to undermine its resistance.

The Palestinians know full well that by besieging Nablus, Israel is seeking to punish its residents and inflict great economic losses on them in an attempt to place pressure on the resistance and incite the people who support the resistance to oppose it. However, this has yet to materialize, as the city residents are showing support for the group calling itself the Lion’s Den.

On Oct. 18, tens of thousands of Palestinians took to the streets of Nablus and other cities of the West Bank and the Gaza Strip in support of the group, shouting “Allahu Akbar” (Arabic for "God Is Great") around mosques and on the rooftops of houses. This came in response to a call made by the Lion’s Den via its Telegram page, as reported by media outlets. The protests reflected one of the largest states of rejection and defiance against the Israeli army’s actions and threats to invade Nablus.

The popular support shown for the resistance in Nablus seems strong and solid despite the siege, which may prompt the Israeli army to launch a large-scale military operation in the city, as Israeli journalist Yoni Ben Menachem said in an article Oct. 17, “The army and the Shin Bet are preparing to catch the city of Nablus off guard to deal with the militants inside, as the residents of Nablus prepare for a long curfew. This could happen after the [Jewish] holidays."