Prominent Lion’s Den fighters turn themselves in to Palestinian Authority

More fighters from the Lion’s Den group in Nablus turned themselves in to the Palestinian Authority, as the Israeli army continues its operations to eliminate the group. 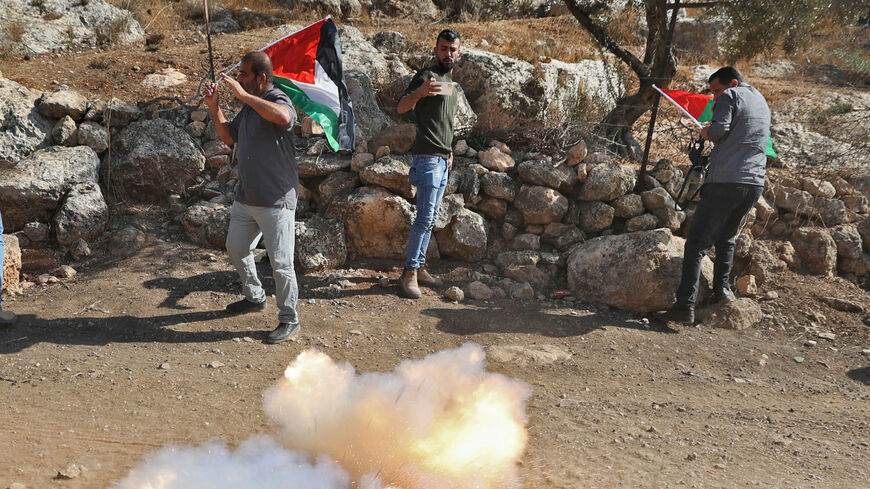 A stun grenade goes off near Palestinian demonstrators during clashes with Israeli forces during a protest against the establishment of Israeli outposts, in Beit Dajan, east of Nablus, West Bank, Nov. 4, 2022. - Jaafar Ashtiyeh/AFP via Getty Images

GAZA CITY, Gaza Strip — More fighters of the Lion’s Den group in Nablus have turned themselves in to the Palestinian Authority (PA) amid PA-led contacts aimed at dismantling the group that continues to inspire other militants to carry out attacks against Israeli forces and settlers in various areas of the West Bank.

Muhammad Tabanja was the most recent fighter to turn himself in to the PA Oct. 31. He joined four other fighters who had surrendered in the aftermath of a military operation carried out by the Israeli army against the group in the Old City of Nablus Oct. 24. The operation resulted in the death of five Palestinians, including the leader of the Lion’s Den group, Wadih al-Houh, and it came a day after the killing of another leader, Tamer al-Kilani, in an explosion in Nablus, which the group accused the Israeli Shin Bet of being behind.

According to the source, Israel had informed the PA that it would liquidate these fighters in the wake of the escalating attacks against the Israeli army and settlers in and around Nablus in recent days, which led to the killing of an Israeli soldier and the wounding of several others.

He said that 13 Lion's Den fighters have so far turned themselves in to the PA, and they are now held at the Jnaid prison in Nablus under the protection of the Palestinian security services.

The source pointed out that contacts are also underway with other fighters of the group, namely Osama al-Taweel and Hussam Eslam, both members of Hamas, whom Israel accuses of killing an Israeli soldier near the Shavei Shomron settlement, west of Nablus, Oct. 11. But according to the source, these talks have yet to lead to an agreement on the surrender of the two fighters.

The source revealed that the Palestinian security offers to the fighters of the group willing to surrender and hand over their weapons protection from being targeted or arrested by the Israeli army and a job at the security services.

The Lion’s Den group reflects a new situation in the Palestinian reality, as it includes fighters from all Palestinian factions. Israel accuses Hamas of sponsoring the Lion’s Den group, claiming that the movement provided $1 million to the group through one of its fighters — Musab Shtayyeh — to buy weapons. Shtayyeh was arrested by the PA in Nablus Sept. 19.

Mohammed Mona, a journalist from Nablus, told Al-Monitor that the Lion’s Den fighters have been lying low in recent days, saying they are most probably hiding from the Israeli army.

He said that many Palestinians are concerned that the group will cease to exist.

Yasser Manna, a researcher in the Department of Israeli Studies Program at Birzeit University, told Al-Monitor that he expects Israel to continue its operations against the remaining members of the Lion’s Den group in order to stop the latter from inspiring other fighters in the West Bank.

However, he does not believe the Israeli operations will eliminate the group, nor does he think that the group will cave in to the PA pressure. Manna expects the next stage to witness sporadic operations by the Lion’s Den fighters against the Israeli forces.

Israeli journalist Yoni Ben-Menachem called on the Israeli army to swiftly eliminate the group’s fighters and avoid allowing them to turn themselves in to the PA to escape “punishment.”

“This is not the way deterrence is built in Israel,” he said in a Nov. 1 tweet.