A presidential initiative puts former political detainees on economic track after their release. 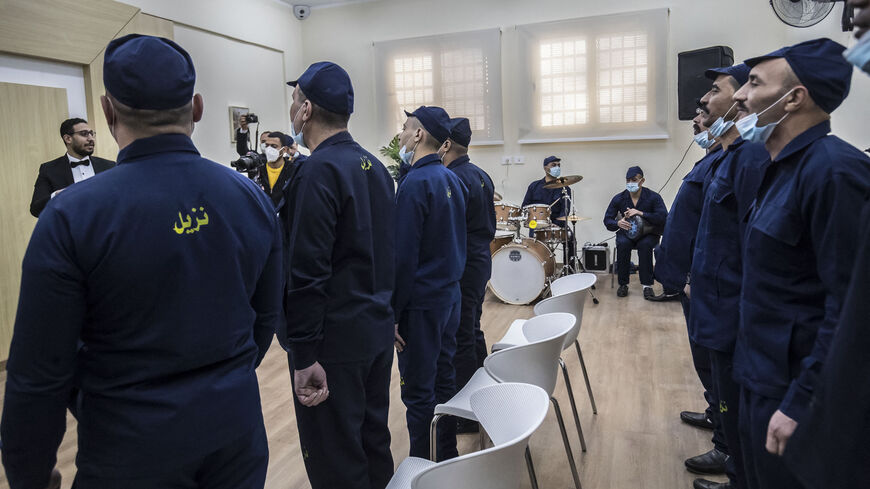 Inmates performing in a band are seen during a government-guided tour for the media,at the Correctional and Rehabilitation Center in Badr city, east of Cairo, Egypt, Jan. 22, 2022. - Khaled Desouki/AFP via Getty Images

CAIRO — An Egyptian presidency program that offers amnesty to political prisoners not involved in violence has gone the extra mile by finding jobs for these prisoners after their release.

The program is seen by the former detainees as giving them renewed hope, and rescuing them from the economic devastation associated with incarceration.

The post-release employment program, some of the former detainees said, also protects them from stigma in a society that views former prisoners as criminals, regardless of whether they are locked up on political grounds or not.

"The program has changed my life altogether after the months I spent in jail," former detainee Roufa Saloma al-Serihi told Al-Monitor. "I am getting a second chance in life."

Serihi, in his mid-30s, was arrested in February 2021 as part of a major security campaign in his home town of Marsa Matrouh, in northwest Egypt on the Mediterranean, and put in jail, together with dozens of others.

He spent 17 months in pretrial detention, while he did not know the type of charges leveled against him by the authorities.

Seventeen months later, he was released, together with scores of other prisoners. By that time, he had lost his job.

The initiative included the formation of a panel of public figures, rights advocates, legal experts and members of parliament to look into the release of political detainees who had not been involved in violent or terrorist activities.

Sisi has faced growing criticism from local and international rights groups that accuse his administration of showing little tolerance to political opposition.

The same groups speak of thousands of political detainees in Egypt's jails, despite the Egyptian parliament refuting such reports.

Some of the activists put in jail were at the forefront of the popular uprising that brought down the regime of late longstanding President Hosni Mubarak in 2011.

The Egyptian authorities have repeatedly denied the imprisoning of citizens on political grounds.

Those in jail, Sisi told the French news channel France 24 in 2017, are awaiting investigations into alleged crimes.

So far, the president's amnesty program has helped hundreds of prisoners out of prison.

The last group of detainees was released Oct. 2, and included 50 detainees who had been in jail for months.

A member of the panel tasked with recommending the prisoners who deserve to be amnestied said the panel had received complaints from some former detainees against their failure to return to their work or study.

The panel, he noted, had referred these complaints to the president who ordered state authorities to offer all types of support to the former prisoners.

"The panel does its best to reintegrate the former detainees into society and protect them against criminal and political deviation," said panel member Tarek al-Awadi.

The panel, he told Al-Monitor, would suggest legislative amendments to help former detainees return to their work.

Serihi had a casual contract with a company before his February 2021 imprisonment, something he lost because of his detention.

Almost two months ago, he was given a job at a major petroleum company that operates in Egypt's Western Desert.

"Now with good economic prospects I can think of the future, including starting my own family," Serihi said. "Life would have been unimaginable without being given this second employment chance."