The Permanent Joint Technical Commission for Nile Waters between Egypt and Sudan has convened after a four-year hiatus amid the stalled negotiations over Ethiopia’s controversial Nile dam. 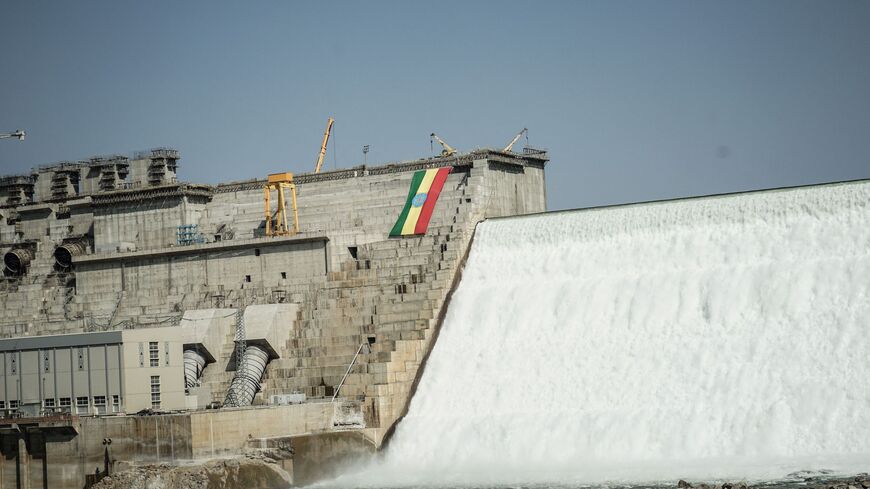 An Ethiopian national flag is seen at the Grand Ethiopian Renaissance Dam (GERD) in Guba, Ethiopia, on Feb. 19, 2022. - AMANUEL SILESHI/AFP via Getty Images

CAIRO — An Egyptian-Sudanese committee tasked with coordinating positions on the Nile River water convened Oct. 10 in the Sudanese capital, Khartoum, after a four-year hiatus.

The 62nd session of the Permanent Joint Technical Commission for Nile Waters between Egypt and Sudan came amid the ongoing crisis over the Grand Ethiopian Renaissance Dam (GERD) that Ethiopia is building on the Blue Nile, the main tributary of the Nile River, and the failure of the three parties to the conflict (Egypt, Sudan and Ethiopia) to reach a legal agreement on operating and managing the dam after decadelong negotiations.

During the session, Aref Abdul Mabadi, head of the Egyptian team within the commission, stressed Egypt’s respect for the 1959 Nile Waters Agreement on the full use of the Nile waters with Sudan, which, he said, dictates the commission’s work.

Of note, the Permanent Joint Technical Commission for Nile Waters was formed shortly after the signing of the 1959 Nile Waters Agreement. It includes representatives of the ministries of water from both countries, as well as water experts.

He further stressed the importance of developing the commission’s activities, building capacities and strengthening the institutional aspect of the commission to serve the interests of the two countries. He also praised the importance of exchanging experiences, and of coordination and cooperation with international research and studies centers working in the field of transboundary waters.

For his part, the head of the Sudanese team, Mustafa Hussein, said during the session that resuming the commission’s regular meetings aims to revive activities for the benefit of the two countries and strengthen joint cooperation between them.

Abbas Sharaki, a professor of water resources and geology at Cairo University, told Al-Monitor that the commission is supposed to meet annually, but the instability of the situation in Sudan following the 2018 protests is most likely what prevented it from convening over the past four years.

“The commission is responsible for discussing issues related to the Nile River, including technical issues and problems, such as the recent torrential rains in Sudan. It is also tasked with finding solutions to these problems, in addition to exchanging information and consulting about new water projects related to the Nile River for the benefit of the two countries,” he added.

Speaking about the GERD crisis, Sharaki noted that the commission has no direct say in the discussions over the dam, since this issue is being discussed more broadly by foreign and irrigation ministers in the three countries.

However, Sharaki reiterated that there is no objection to including the GERD developments, such as the third filling, in the commission’s discussions, but only in terms of the dam’s repercussions and impact on the water situation in the two countries.

Ethiopia insists that the GERD is necessary for its development, while Egypt, which suffers from water scarcity, fears the dam will affect its share of the Nile water. Sudan, for its part, fears the impact of the flow of the Ethiopian dam's water on its own dams.

Heba al-Bashbeshi, a researcher at the Institute of African Research and Studies at Cairo University, told Al-Monitor, “Since the commission’s meetings are technical and pertain to Egypt and Sudan only, they do not have any impact on the GERD crisis. However, they can contribute to creating a common vision toward water issues, as well as the water risks that could befall the downstream countries.”