After years of initiatives and calls for post-mortem organ donation, the Egyptian government is considering establishing an organ registry and expanding organ transplant surgeries. 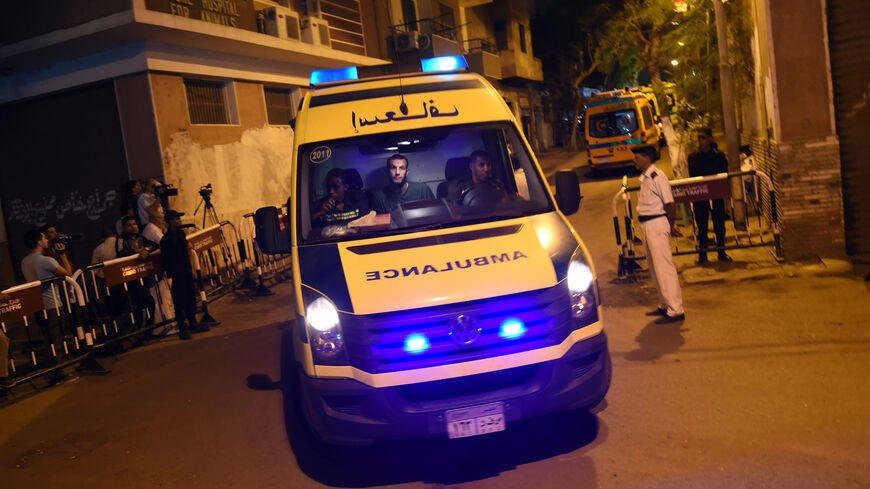 Ambulances carrying the bodies of victims of the A321 Russian airliner that crashed in Wadi al-Zolomat, a mountainous area in the Sinai Peninsula, leave the Zeinhom morgue to Cairo airport, Egypt, Nov. 1, 2015. - Mohamed el-Shahed/AFP via Getty Images

CAIRO — The Egyptian government is currently considering a series of measures to facilitate organ donation and transplants.

Egyptian Minister of Health and Population Khaled Abdel Ghaffar announced in televised statements Sept. 26 that a new transplant center will be established in Egypt as well as a database for donors and patients as part of government efforts to expand organ transplant surgeries in the country.

The announcement was widely welcomed by the medical community and health activists in Egypt.

Dina Reda, 60, the first Egyptian woman to legally document her voluntary wish of posthumous organ donation, was pleasantly surprised by the minister’s statements. “Accepting the idea of organ donation in Egypt has always been far-fetched, but it is time to change this culture,” she told Al-Monitor.

In 2018, Reda issued a power of attorney in the real estate registry to donate her organs after her death and registered her wish under the statutory registration and documentation procedures. Her move was a first at the time. Since then, she has been promoting ​​post-mortem organ donation to save patients' lives.

During the meeting, Sisi directed the government to upgrade the Nasser Institute Hospital as part of efforts to turn it into a global medical city.

Sisi also instructed the government to establish in the Nasser Institute's medical city a regional center for organ transplantation, to be the largest one of its kind in the Middle East and Africa, in cooperation with major international specialized companies to set up an integrated system with an automated database for transplant surgeries, patients and donors.

In his televised statements, Abdel Ghaffar also announced the start of a study to document wishes of organ donation, explaining that the donation would be documented either in an official document issued by the real estate registry, on the Egyptian national ID card or on the driver's license.

He said that Egypt was lagging behind several countries in the region that have introduced organ transplantation surgeries, mentioning Saudi Arabia, Turkey, Iran, the United Arab Emirates, Kuwait and Qatar — countries similar to Egypt in terms of faith and customs, where organ donation is no longer a matter of debate.

“We are ready to implement and expand the system,” he said. “The legal protection for this matter is clear, and it has been discussed by Al-Azhar, the [Orthodox] Church and civil society.”

Last year, Egyptian artists and writers called for allowing and legalizing organ donation after death, but these calls were rejected by the Egyptian public for several reasons, mostly related to religious motives.

However, the controversy resurfaced when a number of celebrities announced their wish to become posthumous organ donors, including actress Elham Shahin, who announced on her Facebook page Sept. 24 that she would donate any healthy organs after her death to those who needed it.

Shahin invited others to follow suit, describing this initiative as a “humanitarian initiative to save the lives of others.”

The same day Shahin’s video was posted, Egypt’s Dar al-Ifta, which is responsible for issuing fatwas, announced in a Facebook post that organ donation after death is legally permissible.

Alaa Ghannam, director of the Right to Health program at the Egyptian Initiative for Personal Rights, told Al-Monitor that the state's plan to start documenting those wishing to donate their organs is a very positive step. He described the move as a “paradigm shift” on this matter.

He said that the failure to implement the law of post-mortem organ donation, which has been in place since 2010, is due to the culture of the Egyptian society that has been sanctifying the human body since the time of the ancient Egyptians.

Ghannam noted that the lack of a clear strategy for organ transplantation led to an increase in violations and exploitation, especially against the poor social classes.

Wael al-Mahdi, professor of neurosurgery and spine surgery at the Faculty of Medicine Kasr Al Ainy at Cairo University, praised the government’s move to expand organ transplantation in Egypt, although he believes it came too late.

He told Al-Monitor, “Large-scale religious and health campaigns must be organized to educate citizens about the benefits and importance of organ donation after death to help patients. This allows for a stock of organs that serve the organ transplantation center that the government plans to establish.”

Despite the seriousness of the government's plans this time, changing the culture of Egyptians and persuading them to donate their organs after death remains a challenge that may not be easy to overcome.