With a large number of Iranians dying in need of organ transplants, the government has moved to restrict such procedures to its citizens only, and only in public and teaching hospitals. 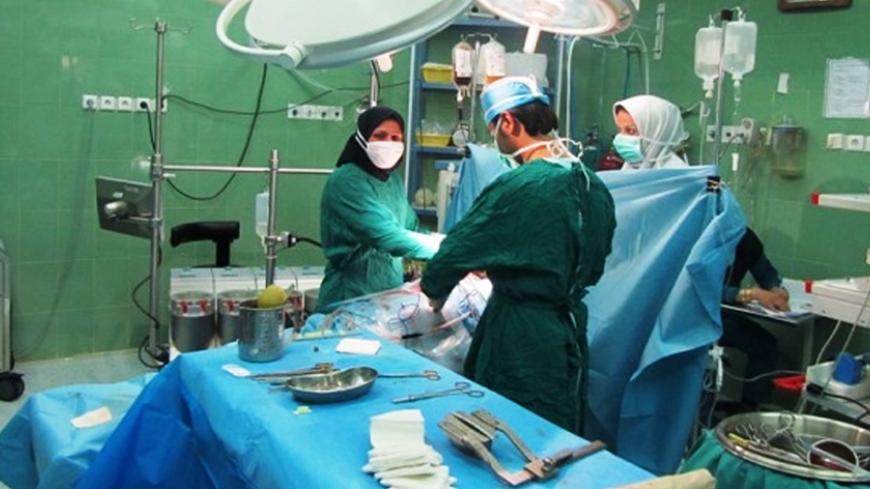 Medical staff work in an operating room of the Imam Khomeini Hospital in Ahvaz in Khouzestan, Iran, Dec. 6, 2010. - Wikimedia Commons/Florence

Over 25,000 Iranian patients are on the waiting list for receiving an organ, according to the latest statistics that Iran’s Ministry of Health has announced. Official statistics show that every day, seven to 10 patients on this list die in dire need of an organ transplant.

The administration has increased its efforts to inform and educate people to willingly become donors, which is why the donor card system was created. A section that has also been added to driver’s licenses in Iran that indicates the license holder’s decision to donate his/her organs.

“Starting on Sept. 21, 2014, no more organ transplant operations will be performed on non-Iranians,” Iranian officials announced in September.

The major reason this decision was made, according to the Ministry of Health, was that the number of foreign citizens who have undergone organ transplant surgery in Iran — 608 legally documented over the past 10 years — was already high, considering the number of Iranian patients in critical condition.

In an interview with Al-Monitor, Dr. Nader S., a nephrologist and experienced transplant specialist in Shiraz, said, “In the private hospital where I am a major share-holder, we had a few cases of foreigners who would travel to Iran and buy a kidney from healthy, broke folks through middlemen and kidney dealers, and then would undergo transplant surgery in our hospital, which is a big, modern, well-equipped hospital, also quite costly; but the latter was obviously no big deal for these people.”

Another recent development has been banning private hospitals from performing transplant surgeries (starting last month), and limiting these procedures to public and teaching hospitals.

The reasons stated for the decision to limit organ transplant surgeries to public and teaching hospitals is to stop what Iran’s health officials refer to as numerous counts of misconduct and abuse of the system, as well as the need for better regulation of transplant procedures and finally, access to better, updated and high-tech equipment in public and teaching hospitals.

A controversial aspect of the topic of transplant is the religious aspect. While there have been differences of opinion among Iranian Shiite clerics about this matter in the past, the organ transplant bill (regarding transplanting organs from the bodies of brain-dead patients) that passed in Iran’s Majles (parliament) in 2000, further paved the way for the procedure. There are still mixed views concerning the details, but Iranian clerics generally accept the procedure. The matters in which nuances become apparent are transplanting the organ(s) of a male to a female or vice-versa, and transplanting organs of a non-Muslim to a Muslim, or vice-versa.

In an interview with Al-Monitor, Mohsen Kadivar, a philosopher and Iranian dissident cleric, expressed his opinion on the matter: “Iranian clerics are quite advanced in this regard. Wahhabis, on the other hand, could be quite harsh on rejecting the idea of transplanting organs. Although I have not studied their view on it in particular, one of the reasons that citizens of Saudi Arabia would have been inclined to travel to Iran for such procedures, other than Iran’s advanced medicine, may have been the difficulties they face in their own country, created by their clerics. I would say Orthodox Christians, too, are less open to what may be interpreted by some clerics as disrupting the acts of God. Personally, although I’d carefully consider the matter on a case-by-case basis, I’d generally say I am welcoming of saving a person’s life if there is a team of physicians pronouncing another person brain-dead. That is, if it is certain he is in a vegetative state, and if his next-of-kin allow the transplant.”

The Iranian government has made considerable efforts as of late, through ceremonies with celebrities in attendance (such as the annual “Nafas [Breath] Feast," celebrating its 11th year in 2014), and public announcements to attract the population’s attention to the benefits of organ donation. Official statistics reveal that currently, 1,400,000 Iranians are registered donors.

Another task Iranian health authorities are attempting to accomplish is persuading families to allow hospitals to proceed with the donation process. Despite being a registered donor, the next-of-kin’s permission is still required for the donation process to get started.

Zahra, 28, a homemaker in Kerman, told Al-Monitor, “I was on top of the waiting list for a heart transplant, in critical condition, and getting eerily closer to death almost by the hour. I later found out that although my donor was registered, at first his family would not allow the organs to be transplanted and the hospital had had a very tough time convincing them, especially his mother.”

Iran’s health authorities estimate the average time needed for donor organs to be extracted from the donor’s body to be 36 hours. Some conservative or traditional Iranian Muslims have mentioned that one of the reasons for their reluctance to allow the process is the necessary wait between death and the release of the body, which delays the burial of their loved one. Examining this reluctance in his interview with Al-Monitor, Kadivar said, “I don’t think of it as an obstacle. Fast burial is recommended in Islam because, at the time of this recommendation, morgues did not exist. Nowadays they do. Plus, the length of time many families spend on preparations or awaiting the arrival of other family members or relatives probably surpasses 36 hours, anyway. “

While progress has recently been made in the organ transplant domain in Iran, there still are, according to Iran’s Ministry of Health, numerous problems and shortcomings within the organ donation system in the country. The organs of an average of 2,500 brain-dead people out of 5,000 should be, under normal circumstances, transplanted. This number is only 665 in Iran: the low number being due to multiple issues, the most significant ones being shortage of equipment and surgeons in small towns, delay in obtaining permission from the families of the donors and miscommunication or lack of communication between relevant and responsible medical units. These issues beg serious attention, and gravely diminish the chances of patients in need of organ transplants of receiving them from donors.