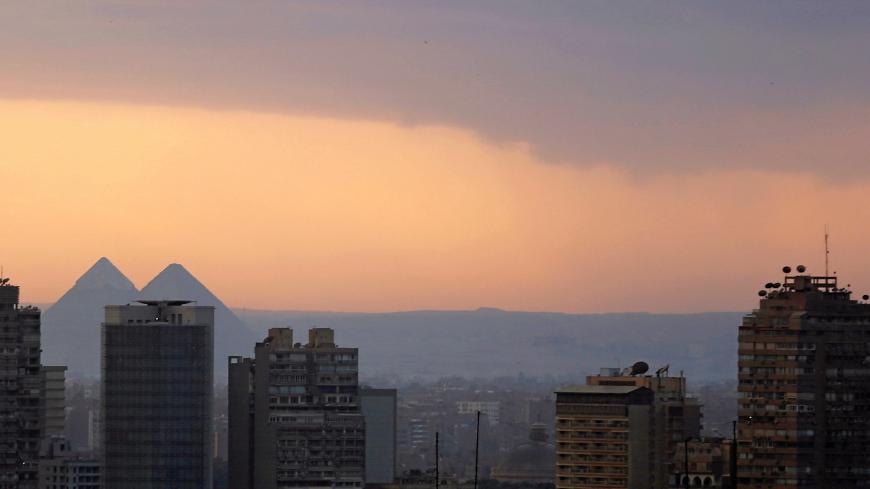 The sun sets behind the Great Pyramids of Giza in Cairo, Egypt, Dec. 5, 2016. - REUTERS/Amr Abdallah Dalsh

CAIRO — The Egyptian Interior Ministry shocked the public Aug. 22 by announcing it had arrested 12 people who had formed an organ trafficking network in Giza governorate, south of Cairo. The revelation sparked the public's fear of a rise in such trafficking in the country, as did media reports this week that piles of human remains were found along a desert road near Mir in Asyut province.

Residents of the Mir area discovered the remains — mostly bones and skulls — of adults and children. Soon after authorities confirmed that they had examined, documented and buried the remains of 14 people, another site was located almost 190 miles away. Al-Ahram reported that residents had told officials about adults and children disappearing. After the remains were discovered, the people expressed fear that organ trafficking might be involved.

As for the ministry's announcement of arrests in Giza, authorities said they actually caught 12 people — including doctors and nurses — in the act of an illegal transplant at a private hospital. The bust came after Germany's ProSieben channel published on Aug. 7 a short investigative documentary that it said revealed the existence of an organ trafficking mafia in Egyptian hospitals, a network of physicians working with traffickers. It also said helpless African refugees were being procured from human traffickers for their organs.

But the Egyptian Ministry of Health rejected the documentary, saying it was filled with “lies and deceit.”

"The German documentary was recorded outside the ministry's [government] hospitals and does not prove any trade or trafficking in human organs inside [these] hospitals." The report, the ministry said, undermines therapeutic tourism in Egypt and "harms Egypt’s national security."

However, reports of trafficking are hardly new in Egypt. In 2011, a report issued by the Coalition for Organ-Failure Solutions based on the testimony of 57 victims said, “Organ traffickers have exploited and are continuing to exploit Sudanese refugees and asylum-seekers in Egypt. These abuses include removing kidneys either by inducing consent, coercion or outright theft.”

Nine months ago, a roundup of alleged traffickers might have lit a fire under the legislature. On Dec. 6, 2016, the Egyptian Administrative Control Authority, an anti-corruption body, revealed it had arrested dozens of members of an international organ trafficking network that included physicians, university professors and nurses.

On July 4, Egypt's parliament approved amendments to the law regulating organ transplants. The amended law stipulates penalties for organ traffickers including fines up to 2 million Egyptian pounds ($113,400) and imprisonment up to a life sentence if a donor dies. If a donor is tricked or coerced into surgery, and that donor dies, the death penalty can be applied. There are also provisions carrying various prison terms, fines and/or license suspensions for people aiding in such operations, as well as sanctions against doctors, clinics and medical centers.

Egyptian physician Ali Mahrous heads the Health Ministry's central administration for nongovernmental health facilities and licenses. He told Al-Monitor by phone that the severe penalties are designed to deter violators. He maintains that organ trafficking has decreased recently in Egypt because hospitals licensed to transplant organs are inspected periodically "to make sure that the necessary health and legal conditions are met."

According to a statement issued by the Ministry of Health on Aug. 20 in response to the German documentary, a specialized ministry committee must approve transplants, and doctors must examine prospective patients and donors to ensure they are ready and medically compatible. The statement also noted that Egyptian citizens cannot donate organs to foreigners, and foreigners wishing to undergo an organ transplant in Egypt must obtain approval from their embassies in Cairo. A donor must sign an officially registered, notarized contract "to confirm there is no human organ-trafficking suspicion,” Mahrous told Al-Monitor.

In Aug. 22 statements to al-Dostor newspaper, Egyptian parliament members criticized the Ministry of Health's failure to control organ transplant centers. Parliamentarian Sami al-Mashad told al-Dostor, “The executive bodies should impose strict supervision over centers trading in human organs. The Health Ministry has no control over these centers in many areas of the country, in violation of the law.”

Abdel Hamid Abaza, the former head of the Health Ministry's Higher Committee on Organ Transplants, told Al-Monitor that harsher legal sanctions will not eliminate gangs that deal in human organs: “This will only happen when the law is efficiently applied." He was speaking of the law regarding "deceased donations," organs that are harvested from the brain-dead or nearly dead. This is a common practice in many nations, but it faced resistance in some Muslim countries because Sharia law says the heart must have stopped for someone to be declared dead.

The practice became legal in 2010 but has yet to be implemented.

Three problems allow trafficking to continue at the international level, Abaza said: “These are the lack of human conscience; poverty; and unemployment, which lead some citizens under the pressure of deprivation and poverty to fall prey to human organ traffickers."

On a related topic, the Egyptian Prime Minister on July 5 issued a decision to restructure the Higher Committee on Organ Transplants, which is headed by Minister of Health Ahmed Emad. A source familiar with the ministry told Al-Monitor that the committee will meet in mid-September to consider applications for transplant center licenses and enforcement of the new amendments to the law.